Silver nanoparticles (AgNPs) are extensively used in many industries due to their superior antimicrobial properties. However, it is evident from many studies that AgNPs has cytotoxic potential through its effect on excessive formation of reactive oxygen species (ROS). The aim of this study was to examine the toxic effect of AgNPs on the submandibular salivary glands and the attenuating effect of vitamin E, as a natural antioxidant, against this toxicity. Thirty Albino rats were divided into 3 groups (n = 10): control group, AgNPs group receiving 2 mg/kg daily for 28 days, and AgNPs and vitamin E group receiving AgNPs the same as the previous group in addition to vitamin E at a dose of 100 mg/kg. Microscopic, ultrastructural, and cytokeratin immune-reactivity examination of the glands were performed. The AgNPs group showed noticeable degeneration in all structures of the gland as evident in the histological and ultrastructural examination. The AgNPs and vitamin E group revealed an improvement of the glandular elements. A significant increase in cytokeratin immune expression was found after comparison of both groups (p = 0.01). This current study shows that vitamin E has powerful antioxidant properties, which can combat the cytotoxic effect caused by AgNPs. Further studies are deemed necessary to confirm this finding using other immunohistochemical markers, such as myosin and E-cadherin.
Keywords: silver nanoparticles; nanotoxicology; submandibular gland; reactive oxygen species; vitamin E; antioxidants silver nanoparticles; nanotoxicology; submandibular gland; reactive oxygen species; vitamin E; antioxidants

In the past few years, silver nanoparticles (AgNPs) have been extensively studied because of their wide commercial use in many products, such as household products [1,2], and in food industry [3,4,5]. Moreover, because of its powerful antimicrobial activity, these nanoparticles are recognized as a resourceful material for the drinking water purification industry [6,7]. Its high chemical stability and relatively low cost are among the main reasons for its popular use [8,9,10]. In addition to the above, AgNPs have multiple beneficial applications in medicine and dental biomaterials [11,12,13,14,15]. Advances in nanotechnology have allowed for the emergence of the term nanomedicine, which allowed for promising applications in laboratory research and biology including drug delivery and catheter coating [16,17,18,19,20,21,22,23,24]. However, many studies have reported potential toxicological effects of AgNPs. Those studies have proposed that AgNPs possess a possible cytotoxic effect through the generation of oxidative stress induced by the overproduction of reactive oxygen species (ROS) in various tissues and pathological conditions including cancer [25,26,27,28,29,30].
ROS are physiological byproducts of cellular biochemical reactions necessary for cellular metabolism. Under normal circumstances, different antioxidant enzyme systems are induced, and they serve to scavenge the formed ROS. However, any imbalance between the antioxidant systems and the ROS might lead to the formation of oxidative stress, which in turn causes damage to cellular organelles as well as to DNA and proteins, resulting in cell death [31,32]. Dietary antioxidants have been shown to be effective in decreasing the toxic effect of AgNPs [33]. Among the previously studied dietary antioxidants is vitamin E as a peroxyl radical scavenger, where it was demonstrated that it can decrease oxidative stress through attenuation of the oxidative cascade and its ability to neutralize ROS, thus protecting the affected organs [34,35,36,37,38,39].
Oral exposure of AgNPs is probably more common than any other routes of administration. AgNPs are used in the water industry for disinfecting drinking water of humans as well as animals. AgNPs can cross the gastrointestinal tract barrier and can be absorbed into the circulation, being translocated to different tissues, where AgNPs could exert their toxic effects [1]. Hence, in the current study, we studied the toxic effect of AgNPs on the submandibular salivary glands. The effect of a natural antioxidant, vitamin E, in combating AgNPs cytotoxicity was also evaluated.

2.2. Preparation and Characterization of the Silver Nanoparticles:

The rapid green method was used [42]. It was conducted in the nanotechnology lab in the Faculty of Science, South Valley University—Egypt. Pomegranate fruits were collected from the local market. Silver nitrate (AgNO3, >99.9%) was obtained. All glass-wares and pomegranate fruit were properly washed with de-ionized water and dried in an oven. Fruit peel extract (FPE) of pomegranate were used as a reducing agent for the development of silver nanoparticles. Properly washed 50 g of the fresh peels of the fruit were added to 250 mL of ultra-pure water in a 500 mL Erlenmeyer flask and boiled for 10–15 min. Whatman filter paper (No. 40) was used for filtration of the boiled material to prepare the aqueous fruit peel extract, which was used as such for metal nanoparticle synthesis.
Aqueous solution (1 mL) of silver nitrate solution was prepared and 50 mL of the metal (Ag) ion solution were reduced using 1.8 mL of FPE at room temperature for 5 min. Below this FPE quantity, the solution took more than 10 min to obtain a significant surface plasmon resonance (SPR) for the metal nanoparticles. Spectral analysis for the development of nanoparticles at different reaction conditions was conducted with UV-Vis spectroscopy using a Perkin-Elmer Lamda-45 spectrophotometer and X-ray powder diffraction (XRD). A Transmission Electron Microscope (TEM) JEM-1200 EX, JEOL 1010 was used for analysis of the size and shape of the developed nanoparticles. The average nanoparticle yield for AgNPs prepared from fruit peel extract (FPE) of pomegranate was 0.85 ± 0.4 mg of AgNPs per 1 g fruit peel tissue dry mass.
For TEM measurements, 3 µL of the sample solution were placed on copper grid, making a thin film of sample on the grid, and dried at room temperature for 15 min. Then, the extra sample was removed using the cone of a blotting paper and reserved in a grid box. The presence of elemental silver was determined using energy-dispersive X-ray analysis (EDX) with a Zeiss Evo 50 instrument. The pH of the solution was maintained by 1 N HCl and NaOH. The resulting solutions of the developed nanoparticles of silver were dried at 800 °C for X-ray powder diffraction measurement. X-ray powder diffraction data were acquired by a GBC EMMA diffractometer in the central laboratory at South Valley University.
The AgNPs produced in the current study were spherical, ranging between 10 and 55 nm, and cubical, ranging between 8 and 46 nm in size. The cubical AgNPs were predominant amongst the produced crystals. The spherical AgNPs (10 nm) were isolated and used in the current study.
All specimens were examined through:

Control group: Histological examination of the glands of the control group showed a normal gland architecture, where serous acini and ductal systems all appeared with typical histological structures (Figure 1A,B). AgNPs group: Noticeable degeneration in the acini and duct was evident. There was apparent shrinkage and a reduction in the size and number of all the parenchymal elements including the acini and ducts. The acini were reduced and degenerated with a lot of cytoplasmic vacuolization. The GCTs showed a loss of regular configuration, while the striated ducts showed cytoplasmic vacuolization and loss of basal striations. The excretory ducts showed loss of the pseudo-stratification of their lining. Some other ducts showed thickening in their lining cells. Most ducts showed dilatation in their lumens with stagnant secretion. Connective tissue septa showed marked degeneration with dissociation of the collagen fibers and chronic inflammatory cell infiltrate (Figure 1C,D).
AgNPs and vitamin E group: The vitamin E-treated group showed histological sections, which showed an almost normal architecture with no or little cytoplasmic vacuolization. Striated ducts regained their basal striations, while the excretory ducts possessed cell lining with a pseudostratified columnar epithelium. Some of the ducts showed thickening in their epithelial lining. An increase in the fibrous CT content surrounding the ducts was sometimes recorded (Figure 1E,F).

The electron microscopic examination of the submandibular salivary glands of the control group showed normal ultrastructural elements (Figure 3). While the examination of glands of the AgNPs group showed severe ultrastructural changes of the secretory portions and ducts as well as the connective tissue stroma. Acini and ducts appeared to be degenerated, where the most frequently observed feature was the appearance of many cytoplasmic vacuolations. Organelles, such as nuclei, mitochondria, and rough endoplasmic reticulum (RER), showed massive degeneration (Figure 4). Glands of the group treated with vitamin E showed noticeable enhancement of the acini and ducts with insignificant changes (Figure 5).

Within the limitations of the current study, we conclude that AgNPs are capable of causing degeneration in the parenchymal elements of the submandibular salivary glands. This degeneration was evident by the histological and ultrastructural results as well as immunohistochemical localization of cytokeratin. Interestingly, vitamin E ameliorated AgNPs toxicity and restored the degeneration caused by silver nanoparticles (AgNPs) in submandibular salivary glands. Further studies are deemed necessary to confirm this finding using other immunohistochemical markers, such as myosin and E-cadherin, apoptotic markers including Bcl-2, P27, and P53, as well as quantifying apoptosis by using flow cytometry.

A license for animal testing was obtained by the ethical committee of Faculty of Dentistry Ain Shams University, Egypt (license #613-19/10/2020).

The authors are grateful for Shehab Eldin Saber the manager of Centre of Innovative Dental Sciences (CIDS) at the British University in Egypt for providing the microscopic imaging and image analysis used in this study. 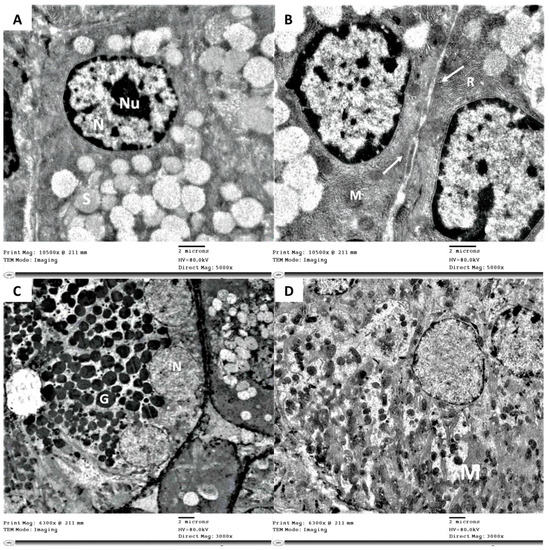 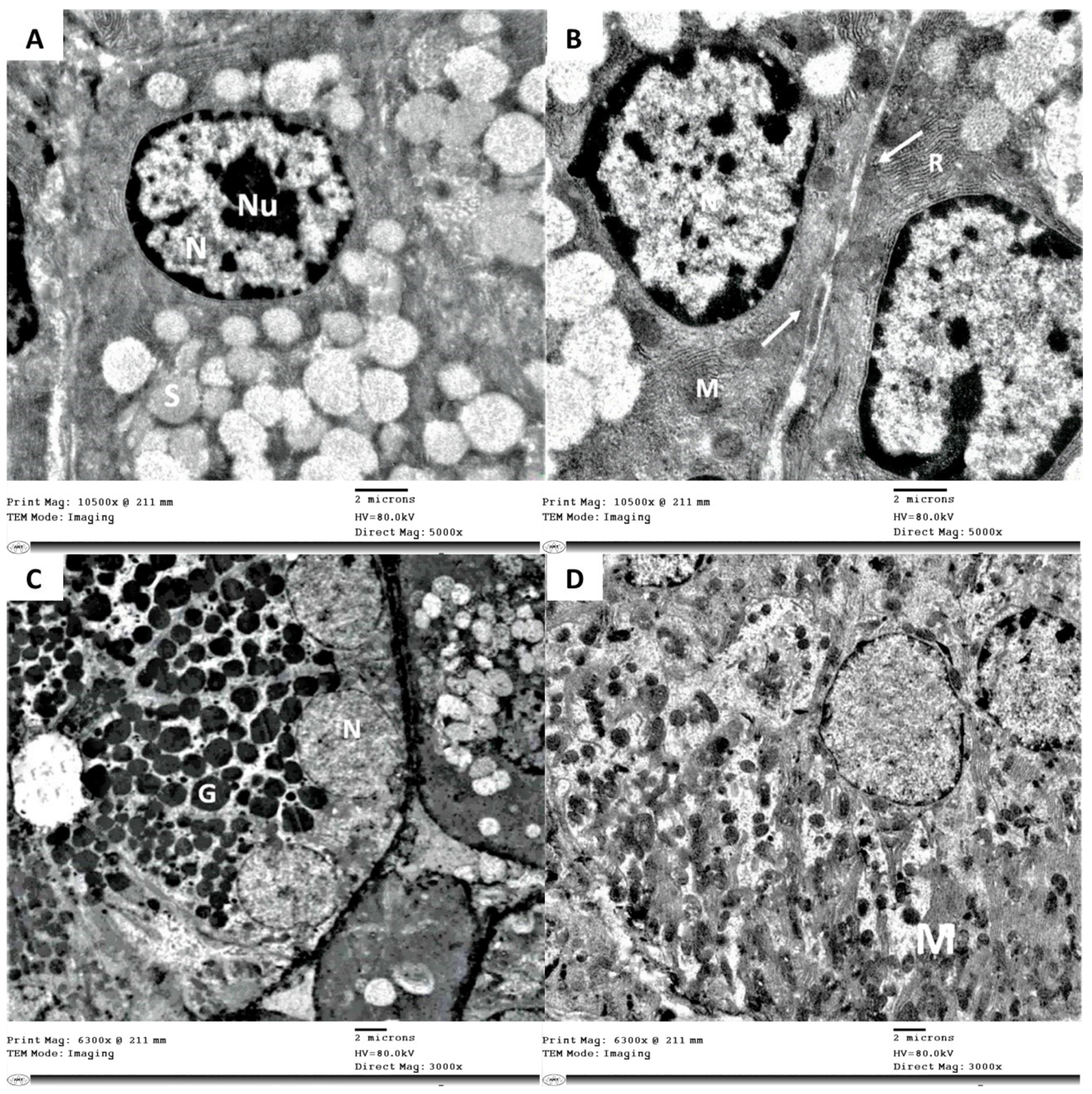