An Assessment of Woody Plant Water Source Studies from across the Globe: What Do We Know after 30 Years of Research and Where Do We Go from Here?
Next Article in Special Issue

Submarine groundwater discharge (SGD), the discharge of terrestrial groundwater to the ocean, can govern the coastal benthic environment. Bacteria such as Vibrio cholerae inhabit coastal waters and sediments, whose growth can be influenced by SGD. In particular, salinity changes introduced by SGD could have a positive effect on the abundance but also virulence of non-halophilic V. cholera bacteria dwelling in coastal waters and shallow marine sediments. Here we assess potential effects of SGD on the environmental properties that favor V. cholerae in a numerical modeling study representing multiple scenarios. Approaching natural systems, simulation results reveal a high sensitivity of non-halophilic Vibrio cholerae growth to SGD and its primary driving factors. This dependency leads to highest growth potential at high groundwater inflow and low hydraulic conductivity of the aquifer as well as for steep sea-side boundary slopes. Besides its minor impact on the extent of SGD in our model, dispersion is a crucial limiting factor for V. cholerae habitat. We conclude that there is a close connection between the driving factors of SGD and low salinity zones along a coastal slope, and recommend taking these into consideration for evaluating local V. cholerae outbreaks. View Full-Text
Keywords: Submarine groundwater discharge; SGD; Vibrio cholerae; coastal research; numerical simulations; FEFLOW Submarine groundwater discharge; SGD; Vibrio cholerae; coastal research; numerical simulations; FEFLOW
►▼ Show Figures 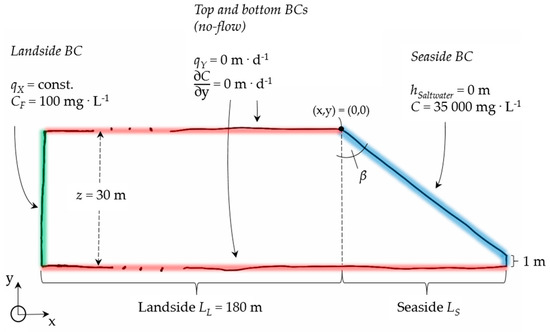