Acknowledgement to Reviewers of Hydrology in 2016

Given the widespread ecological implications that would accompany any significant change in evaporative demand of the atmosphere, this study investigated spatial and temporal variation in several accepted expressions of potential evaporation (PE). The study focussed on forest regions of North America, with 1 km-resolution spatial coverage and a monthly time step, from 1951–2014. We considered Penman’s model (EPen), the Priestley–Taylor model (EPT), ‘reference’ rates based on the Penman–Monteith model for grasslands (ERG), and reference rates for forests that are moderately coupled (ERFu) and well coupled (ERFc) to the atmosphere. To give context to the models, we also considered a statistical fit (EPanFit) to measurements of pan evaporation (EPan). We documented how each model compared with EPan, differences in attribution of variance in PE to specific driving factors, mean spatial patterns, and time trends from 1951–2014. The models did not agree strongly on the sensitivity to underlying drivers, zonal variation of PE, or on the magnitude of trends from 1951–2014. Sensitivity to vapour pressure deficit (Da) differed among models, being absent from EPT and strongest in ERFc. Time trends in reference rates derived from the Penman–Monteith equation were highly sensitive to how aerodynamic conductance was set. To the extent that EPanFit accurately reflects the sensitivity of PE to Da over land surfaces, future trends in PE based on the Priestley–Taylor model may underestimate increasing evaporative demand, while reference rates for forests, that assume strong canopy-atmosphere coupling in the Penman–Monteith model, may overestimate increasing evaporative demand. The resulting historical database, covering the spectrum of different models of PE applied in modern studies, can serve to further investigate biosphere-hydroclimate relationships across North America. View Full-Text
Keywords: potential evaporation; evaporative demand; pan evaporation; climate trends potential evaporation; evaporative demand; pan evaporation; climate trends
►▼ Show Figures 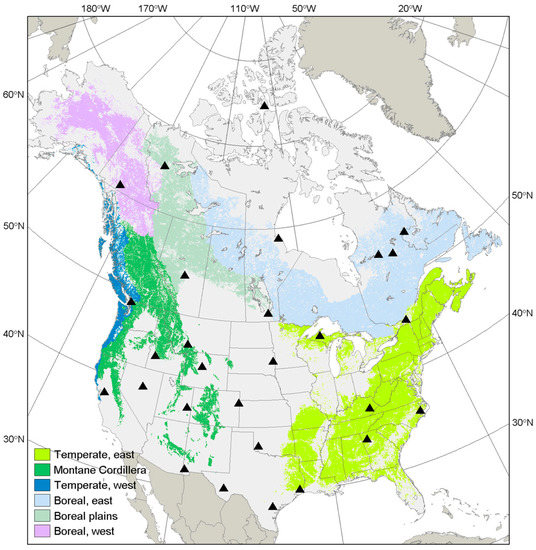