Celastrus hindsii is a plant species belonging to the Celastraceae family, and is mainly distributed in South America and China [1]. In Vietnam, C. hindsii is naturally present in forests and is commonly found in several provinces, such as Ha Nam, Hoa Binh, Quang Ninh, and Ninh Binh. The plants are used as a traditional medicine for treatment of inflammation, and for their anticancer and antitumor properties [2]. Extracts of C. hindsii have been used to defend against insects and inhibit pestilences in agriculture. Additionally, it has been known to be a folk medicine for treatment of a plethora of medical ailments, such as stomach disorders, infectious diseases, arthritis, and cancer [3]. Some important compounds, such as maytenfolone A and celasdine B, have been isolated from leaves of C. hindsii and have been found to exhibit potent cytotoxicity against cancer cell lines, as well as anti-HIV replication activity [4].
For many years, natural products have been effectively used as treatments of various diseases and illnesses. Of them, phenolic constituents are widely studied because they are non-toxic, effective at low concentrations on many biological activities, environmentally friendly, and they can be extracted by low cost technology [5,6]. Besides these benefits, phenolic compounds possess many pharmacological activities, such as antioxidant and anti-inflammatory potential, and show strong inhibition against cardiovascular disease, cancer, and diabetes. Simple phenolic acids and flavonoids are the most common phenolic compounds and generally occur as glycosides and in insoluble forms [7,8].
Antioxidants have been used widely in industry and medicine. Their reactive ability can help to prevent aging, cell destruction, and incurable diseases [9]. They have the capability to interrupt radical-chain processes resulting in low activity of free radicals and improve general health, cell rejuvenation, and anticancer mechanisms [10]. Antioxidants also play an important role in delaying or preventing oxidation of oxidizable substrates [11].
Due to these beneficial properties of antioxidants, many studies have been carried out to find new natural sources of antioxidants. Research regarding antioxidant extraction from plant tissues have received great attention because of their availability in nature and cost effectiveness. The fortification of exogenous antioxidants in foods, beverages, or medicinal products can be a promising method to counter undesirable effects of oxidative stress [11]. Furthermore, in general, antioxidants also exhibit pharmacological effects, such as antibacterial, antiviral, anti-inflammatory, anti-aging, and anticancer activities [12].
Information about antioxidant activity, total phenolic, and flavonoid contents of C. hindsii is still limited. This study was carried out to evaluate the antioxidant activity, total phenolic content (TPC), and total flavonoid content (TFC) of C. hindsii. The identification of active components was conducted to determine compounds that are responsible for the antioxidant potentials of this plant using (GC-MS) and (EIS-MS) analyses.

Leaves of Celastrus hindsii were collected from Cao Duong commune, Luong Son district, Hoa Binh province, Vietnam, in May of 2017. The dried and sterilized voucher specimens (No. PPBC170506) were deposited. All samples were sterilized, dried in an oven at 30 °C for one week, and then pulverized into a fine powder.

An amount of 1.12 kg powder was soaked in methanol for 30 days in ambient conditions. A rotary evaporator (SB-350-EYELA, Tokyo, Japan) was used to remove the solvent at a temperature of 50 °C. The crude methanol extract was then separated by hexane, ethyl acetate, and an aqueous solution to obtain 33.32 g, 133.33 g, and 55.30 g extracts, respectively. The EtOAc extract, the most active extract in a preliminary test, was fractionated by column chromatography using an eluent gradients technique (chloroform and methanol) to yield 14 fractions (Table 1). These fractions were then subjected to TPC, TFC, and antioxidant assays. The fractionation process of EtOAc extract is described in Figure 1.

The phenolic content was evaluated by the Folin-Cicalteau method [13] with minor modifications. Tested samples were mixed with 0.125 mL of Folin-Ciocalteu reagent and then shaken for 6 min. Then, a volume of 1.25 mL of 7% Na2CO3 was added. The mixture solutions were adjusted with methanol to a volume of 3 mL, mixed thoroughly, and incubated at ambient temperature in dark conditions. The absorbance was then recorded at 765 nm. Total phenolic content was expressed as milligrams of gallic acid equivalents per gram of extract or fraction (mg GAE/g extract) following a standard curve, which was prepared prior. All samples were analyzed in 3 replicates.

The total flavonoid content of C. hindsii was determined by the aluminum chloride colorimetric method [14]. In this assay, a volume of 100 µL aluminum (III) chloride hexahydrate (2% w/v in water) was added into 100 µL of sample of rutin standard. After incubation at room temperature and dark conditions for 15 min, the absorbance was measured at 430 nm. Total flavonoid contents were calculated following a standard curve and expressed as mg of rutin equivalent per g extract or fraction (mg RE/g extract).

Antioxidant activity of extracts and isolated fractions were estimated by DPPH free radical scavenging method described by [15]. In details, a mixture contained 0.5 mL of each sample, 0.25 mL of 0.5 nM DPPH, and 0.5 mL of 0.1 M acetate buffer (pH 5.5) was prepared and placed in the dark for 30 min at ambient conditions. The absorbance of the reaction was recorded at 517 nm using a microplate reader (MultiskanTM Microplate Spectrophotometer, Thermo Fisher Scientific, Osaka, Japan). Methanol and BHT (10–50 ppm) were used as negative and positive controls, respectively. The antioxidant capacity of the tested samples was calculated using the following equation:
DPPH radical scavenging activity (%) = [(C − S)/C] × 100
where S and C are the corresponding absorbances of reaction with and without sample. The result was expressed as IC50 value, which determined the concentration of the sample required to scavenge 50% of DPPH.

The ABTS method was used to assess the antioxidant property of C. hindsii [16]. The ABTS solution was obtained by mixing 7 mM ABTS and 2.45 mM potassium persulfate solution. After incubating the mixture in the dark at room temperature for 16 h, MeOH was added to achieve an absorbance of 0.70 ± 0.05 at 734 nm. A volume of 24 µL of each sample was mixed with 120 µL of ABTS solution, and the mixture was incubated in the dark at ambient conditions for 30 min. The absorbance was read at 734 nm using the microplate reader. BHT (5–125 µg/mL) was chosen as a standard and MeOH was a negative control. The ABTS radical scavenging activity was calculated the same with that of DPPH method.

The β-carotene bleaching method was used to evaluate the antioxidant activity of C. hindsii [17]. To begin with, 2.0 mg β-carotene solid and 10 mL chloroform were mixed thoroughly. Afterward, 1 mL of the obtained solution was mixed with 20 µL linoleic acid and 200 mg Tween-40. The chloroform was removed by a vacuum at 45 °C, followed by adding 50 mL oxygenated water to create an emulsion. Next, 0.12 mL of the sample was added into 1 mL of the obtained emulsion in test tubes and the mixtures were incubated at 50 °C. Absorbance was recorded at 492 nm. The reactions were measured every 15 min over 3 h. Methanol and BHT were employed as negative and positive controls. Percentage of lipid peroxidation inhibition (LPI) was determined as follows:
% LPI = B/A × 100
where A and B are absorbance values measured at the start and finish time of the reaction, respectively.

Chemical components of active fractions were identified by using a GC-MS system (JMS-T100 GVC, JEOL Ltd., Tokyo, Japan), according to previous methods [18,19]. The analysis was conducted in DB-5MS column (30 m × 0.25 mm, thickness 0.25 μm) using helium as the carrier gas, performed at a split ratio of 5:1. The injector and detector temperatures were maintained at 300 °C and 320 °C, respectively. The oven temperature was set up as follows: 50 °C without hold time, increasing 10 °C/min to 300 °C, with a 20 min hold. The samples were diluted in MeOH, and injection volume of each sample was 1 µL. The mass range scanned from 29 amu to 800 amu. The identification of identified chemicals was conducted using the mass library of JEOL’s GC-MS Mass Center System Version 2.65 a.

Statistical analysis was performed by using one-way ANOVA by the Minitab® 16.2.3 (©2012 Minitab Inc.; Philadelphia, PA, USA). Turkey’s test was used to identify the significant differences (p < 0.05) among the tested samples. The results were expressed as mean values ± standard errors.

3.4. Identification of Bioactive Compounds by GC-MS and ESI-MS

Bioactive fractions including P1, P4–P14 were analyzed by GC-MS and EIS-MS to reveal the presence of principal compounds, including hexadecanoic acid, α-amyrin, β-amyrin, hydrazine carboxaminde, (3β)-D:C-friedours-7-en-3-ol, fucosterol, β-sitosterol, phytol, dihydroxylacetone, rutin, glycerin, 2′-hydroxyacetophenone, and 2-hydroxy-1-ethyl ester (Table 4). The peaks area (%) were used to compare the concentrations of compounds detected in each fraction. It was found that the presence and concentration of the identified constituents were varied among fractions P1 and P4–P14. Of these fractions, both α-amyrin and β-amyrin showed the maximum concentrations in P1 and P4 (25.56–57.67%). The β-amyrin in P5 and P7 accounted for greater quantity than α-amyrin, however, α-amyrin accounted for 31.74% in P8, whilst no trace of β-amyrin was observed in this fraction. However, both α-amyrin and β-amyrin were not detected in fractions P9–P14 (Table 4). With the exception of P1, the compound hydrazine carboxamide was found in all fractions P4–14. Fraction P4 showed the maximal concentration (38.64%), followed by P13 (21.43%), while other fractions showed lower quantity (1.84–13.75%) (Table 4). Hexadecenoic acid was identified in only P1, P10, and P11, of which P10 showed greater quantity (13.09%). The other principal compounds included fucosterol (43.62%, P5), (3β)-D:C-friedours-7-en-3-ol (29.3%, P5), rutin (7.45%, 12.46%, and 7.43% in P9, P10, and P13, respectively), and 2-hydroxy-1-ethyl ester (20.22%, P13) (Table 4). The other identified chemicals accounted for much lower quantities (<5%).

This study observed that ethyl acetate was the most effective extracting solvent to extract potential antioxidants from C. hindsii. The use of methanol at 50–70% in combination with chloroform provided maximal DPPH and ABTS radical scavenging activity. The GC-MS and ESI-MS analyses revealed the presence of fifteen compounds, with the principal consitutents being α-amyrin, β-amyrin, hydrazine carboxamide, hexadecanoic acid, fucosterol, (3β)-D:C-friedours-7-en-3-ol, rutin, and 2-hydroxy-1-ethyl ester. In order to confirm and expand on these results, further investigation on medicinal and pharmaceutical properties of this plant should be investigated and the isolation and purification of bioactive chemicals from this plant should be elaborated.

The authors thank Komahira Scholarship Foundation for providing Tran Duc Viet a scholarship. Phung Thi Tuyen, Do Tan Khang, Truong Ngoc Minh, and Truong Thi Tu Anh are appreciated for their assistance to this research. Breana Venneman is appreciated for English revision of this manuscript. 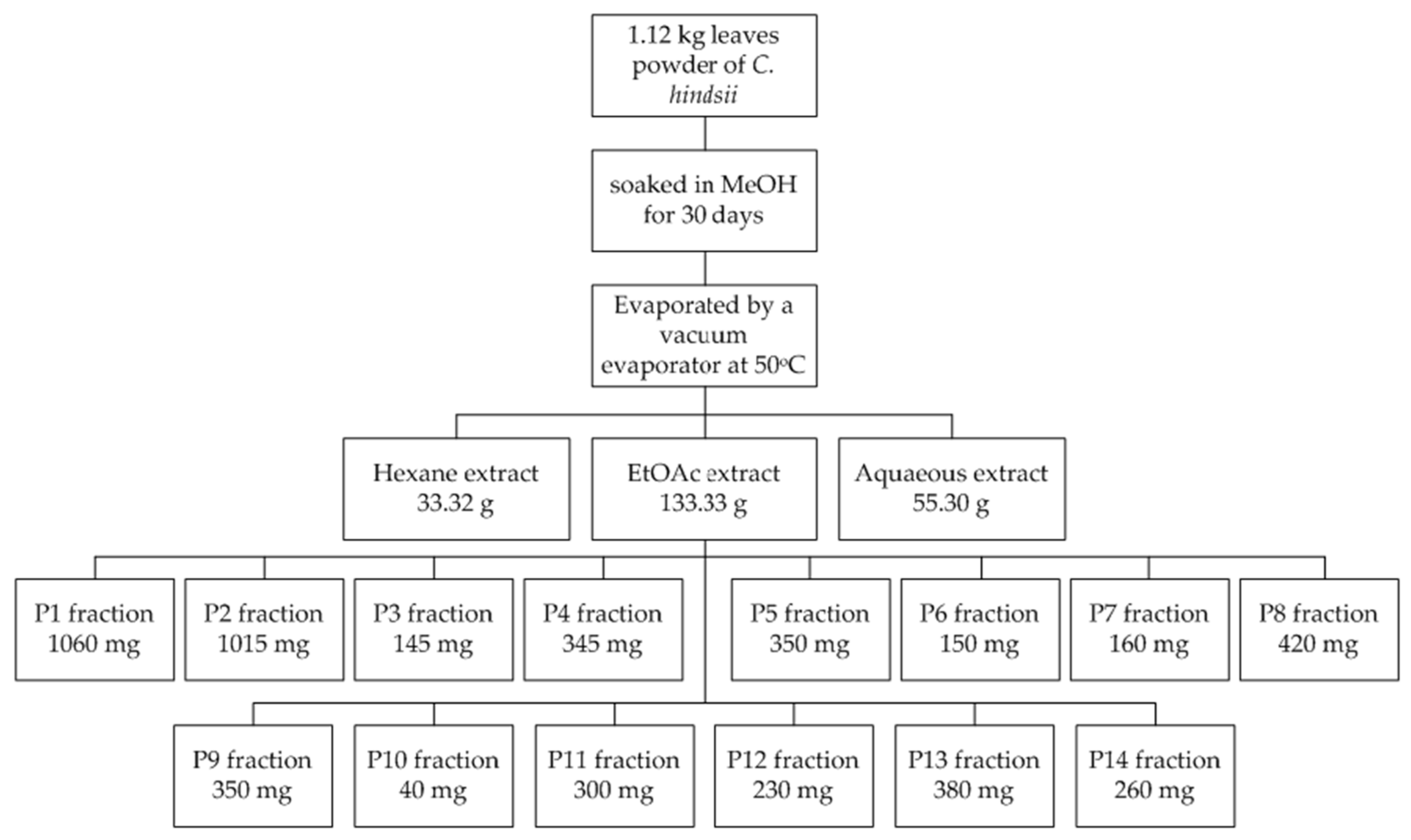