Spatial Distribution and Ecological Risks of the Potentially-Toxic Elements in the Surface Sediments of Lake Bosten, China

Many respiratory diseases, such as interstitial pneumonia associated with collagen disease, chronic obstructive pulmonary disease (COPD), and acute respiratory distress syndrome (ARDS), are associated with damage to lung epithelial cells, mainly caused by oxidative stress [1,2]. The lungs, an organ that exists in a highly oxygenated environment and requires a large blood supply to a large surface area, are susceptible to damage mediated by reactive oxygen species (ROS) [3]. ROS may be involved in the remodeling of extracellular matrix, apoptosis, and cell proliferation [4]. Anti-oxidative factors such as catalase, glutathione peroxidase, and superoxide dismutase are expressed in the lungs and maintain its redox states [5,6,7]. Conversely, NADPH oxidase, nitric oxide synthase, and mitochondria are sources of endogenous ROS [8]; however, the factors that are involved in promoting ROS production in the lungs have not been fully investigated.
Transcription factor homeobox protein B13 (HOXB13) is highly expressed during the developmental stage and essential for vertebrate embryonic development [9]. Although HOXB13 expression is reported to be negatively regulated by anti-sense RNA and methylation of its promoter region, reports of positive regulation of its expression are obscure [10,11]. HOXB13 is also expressed in some adult tissues and known as an oncogenic transcription factor that is associated with the malignancy of ovarian cancer, prostate cancer, and also lung adenocarcinoma [12,13,14]; however, the physiological/pathophysiological role of HOXB13 remains controversial. In a previous study, we reported that HOXB13 is involved in cell death caused by hydrogen peroxide and thiol-reactive electrophiles [15]. This indicates that HOXB13 has a novel function as a potentiator of cytotoxicity caused by oxidative stress. Therefore, in this study, we elucidate the role of HOXB13 in cell death caused by hydrogen peroxide in human lung epithelial A549 cells.

A549 cells were seeded onto a 48-well plate and cultured for 24 h before exposure to hydrogen peroxide. Additionally, cytotoxicity was evaluated using N-acetyl cysteine (NAC) as an antioxidant against hydrogen peroxide in this study. Cells were treated with hydrogen peroxide alone or hydrogen peroxide and NAC (100 µM) or Trolox (10 µM) and cultured at 37 °C for 24 h. Cytotoxicity was evaluated based on the lactate dehydrogenase (LDH) levels in the medium using the LDH assay kit (Dojindo Laboratories, Kumamoto, Japan). After the exposure of indicated concentration of hydrogen peroxide with or without antioxidants (NAC (100 µM) or Trolox (10 µM)) for 24 h, 100 µL of medium was collected from each well and transferred to a 96-well plate. Next, the working solution was added to each well and incubated to react at 37 °C for 30 min. After the incubation, 50 μL of stop solution was added to each well. Finally, the absorbance at 490 nm was measured using an Infinite M1000 Pro (Tecan Japan Co., Ltd., Kanagawa, Japan), and changes in LDH levels in each well were calculated from the absorbance at 490 nm. Cytotoxicity was also evaluated by alamerBlue assay. After the exposure of hydrogen peroxide, the medium was changed to 90% DMEM, 10% alamerBlue solution (Invitrogen) and further incubated at 37°C for 2 h. Ex 540 nm/Em 590 nm were measured as alamerBlue value.

Complementary DNA from HEK293 cells was used as a template. The coding region of the HOXB13 gene was amplified by PrimeSTAR (Takara) using the following primers: 5′-CCCAAGGTACCATGGAGCCCGGCAATTATGCCACCTTGG-3′ (sense) and 5′-GTGAAGAAC AGCGCTACCCCTGGTACCTTGGG-3′ (antisense). The resulting PCR product was ligated into the pEF5V/FRT/V5-DEST vector using Kpn1 (New England Biolabs, Ipswich, MA, USA) and Ligation high (Toyobo, Osaka, Japan) according to the manufacturer’s protocol. The plasmid was transformed into DH5α (Toyobo) for amplification and purified using the Plasmid maxi kit (Qiagen). Sequences of the above plasmids were confirmed by Sanger sequencing (Fasmac, Kanagawa, Japan).

3.1. HOXB13 Is Involved in the Cell Death Caused by Hydrogen Peroxide through Enhancement of Oxidative Stress

Our present results suggest that HOXB13 is upregulated by hydrogen peroxide and that an increase in its levels is associated with enhancement of oxidative stress, which is followed by cell death [16]. Although the detailed mechanisms underlying the above phenomena are obscure, the present study clearly indicates that HOXB13 may be a promising target factor to study cellular toxicity induced by various oxidative stress inducers in pulmonary cells.
Excessive oxidative stress is involved in damage to DNA, lipids, or protein and causes cell death [17,18]. Living cells protect themselves from oxidative stress-induced cytotoxicity through the action of cellular defense factors such as Nrf2 [19] or Hsf1 [20]. Contrary, less is known about the transcription factors involved in oxidative stress-induced cytotoxicity, e.g., EST1 is known to be involved in ROS production via inducing NADPH oxidase [21]. Our results suggest that HOXB13 may be a novel factor that is involved in enhancement of endogenous ROS production (Figure 4 and Figure 5). Endogenous ROS are mainly produced by mitochondria, NOX, nitric oxide synthase, and xanthine oxidase [22,23,24,25]; however, HOXB13 is located in the nucleus. Thus, HOXB13 may increase endogenous ROS via promoting transcription of the downstream genes associated with intracellular ROS production. Elucidation of the detailed mechanism through comprehensive screening such as DNA microarrays and RNA sequencing will clarify the new toxicological significance of HOXB13 as an endogenous oxidative stress inducer.
As described in the introduction, the induction of HOXB13 gene expression is known to be negatively regulated by a long non-coding RNA, HOXB13-AS [10]; however, transcriptional regulation of HOXB13 has not been fully elucidated. We examined the promoter activity of the HOXB13 gene and found that a region −250 to −500 bp upstream of the transcriptional start site was important for the transcriptional promotion of HOXB13 by hydrogen peroxide (unpublished observation). Furthermore, candidate transcription factors that could bind to this promoter region and promote HOXB13 transcription were identified as SP-1 and HIF-1 by using the Eukaryotic Promoter Database (data not shown; https://epd.epfl.ch//). Hydrogen peroxide has been reported to activate HIF-1 [26] and Sp1 [27]; thus, these factors may be involved in the induction of HOXB13 expression by hydrogen peroxide. However, further detailed studies are needed to reliably identify the transcription factors involved in the induction of HOXB13.
Although it has been reported that HOXB13 suppresses the cell cycle in some human prostate cancer cells in response to its increased expression [28], overexpression of HOXB13 has not been reported to cause cell death, unlike in the present study. Therefore, it is likely that HOXB13 causes cell death by promoting the induction of oxidative stress through an unknown mechanism. At least mRNA levels of catalase and glutathione peroxidase were largely unchanged by HOXB13 overexpression (Figure 5C); these indicate that decrease of antioxidant systems may not be involved in the enhancement of ROS production by HOXB13 overexpression. HOXB13-mediated ROS production was completely canceled by addition of PEG-catalase, a membrane permeable hydrogen peroxide specific scavenger (Figure 5B). These results suggested that HOXB13-mediated ROS production is mostly hydrogen peroxide, and this may be the cause of cell death. Furthermore, as mentioned above, this is the first study to suggest that HOXB13 functions as a novel factor involved in the induction of oxidative stress and will have a significant impact on future oxidative stress-related research. However, we have yet to find that HOXB13 levels are increased by hydrogen peroxide in any other cell types apart from HEK293 and A549 cells. In addition, high concentrations of hydrogen peroxide would cause secondary ROS production and imbalance cell redox status that is related to unexpected artificial cellular responses; thus, these are limitations of our study. In the future, similar studies on various cell types and primary cultured cells will be necessary, and, if possible, verification studies using experimental animals will also be required.

This work was supported by a Grant-in-Aid (15H05714, 19H04276) for scientific research from the Ministry of Education, Culture, Sports, Science and Technology of Japan. 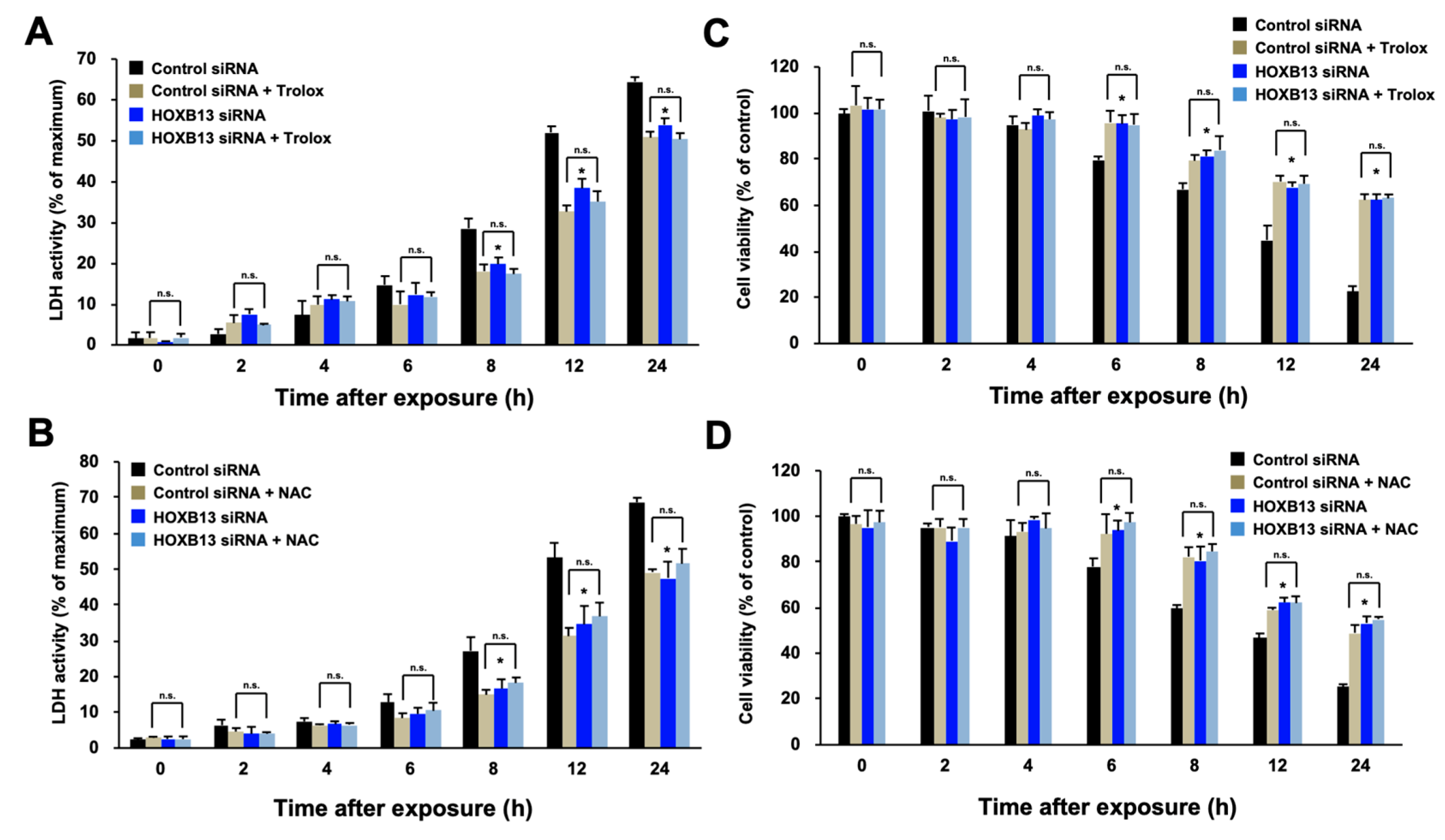 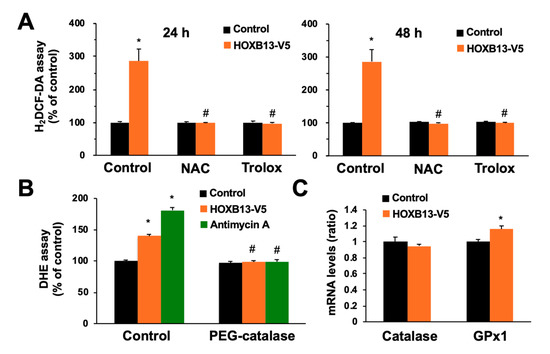