Several mercury compounds are considered hazardous, exerting mainly central nervous system (CNS) or renal damage [1,2,3]. Methylmercury is a pollutant that causes severe damage [4,5], and accumulates in fish by bioaccumulation. Recent epidemiological investigations have shown that pregnant women who take up relatively large amounts of methylmercury are at higher risk of delivering children with developmental disorders [6,7]. Mercury vapor also produces neuronal damage, and the exposure of gold miners to high levels of mercury vapor through mercury amalgamation is a great concern in developing countries [8,9]. Furthermore, the exposure of children to mercury vapor has increased due to the use of mercury in amalgam to extract gold from ores [10]. Recently, it was reported that high concentrations of methylmercury were detected in grains yielded near a mercury mine in China [11]. These reports suggest that rice is a source of methylmercury exposure in the area. In addition, the median estimated methylmercury intake for children was 0.29 µg/kg bodyweight/week, which is approximately 16% above the dietary references dose (RfD) in Hong Kong [12]. Furthermore, a recent Japanese cohort study suggested that prenatal methylmercury exposure affected neuronal function during child development [13,14].
Metallothionein (MT) is a defense factor against harmful metals such as mercury and cadmium. MT is a cysteine rich, low molecular protein that reduces toxicity by binding to metals [15,16]. There are four isoforms of MT, I to IV, which have different locations and levels of expression and varied physiological functions [15,16]. MT-III, which is present in the brain, has a protective effect against various brain diseases [17,18,19].
Recently, it has been reported that methylmercury increases the expression of several chemokine genes specific to the mouse brain [20]. Furthermore, we examined the impact of methylmercury on the expression of chemokine genes in various mouse tissues and found that expression of Ccl4 shows brain specific induction by methylmercury treatment [21]. Chemokines are a type of cytokine known to cause migration of leukocytes. They are secreted primarily from immune cells and participate in the inflammatory response [22]. Chemokines are also secreted from various tissues, including the brain, kidney, and liver [23,24,25,26].
In this study, we investigated the involvement of MT-III in chemokine gene expression in the cerebrum and cerebellum in response to methylmercury and mercury vapor using the MT-III null mice.

MT-III null mice and 129/Sv mice as wild-type controls were purchased from The Jackson Laboratory (Bar Harbor, ME, USA) and routinely bred in the vivarium of the School of Pharmacy, Aichi Gakuin University. MT-III null mice were engineered by Erickson et al. [18] and had the 129/Sv genetic background. Three-week-old female mice were caged in a ventilated animal room at 24 °C ± 1 °C with 50 ± 10% relative humidity, and a 12 h light–dark cycle in the animal room of the School of Pharmacy, Aichi Gakuin University. Mice were maintained on standard laboratory food (MF, Oriental Yeast Co., Tokyo, Japan) and tap water ad libitum, and they received humane care throughout the experiment according to the guidelines of the School of Pharmacy.
Mice were assigned randomly to control or experimental groups (n = 4–5). For mercury vapor (Hg0) exposure, mice were placed in a mercury vapor exposure chamber and exposed for 8 h every day at a mean concentration of 0.121 (range: 0.080 to 0.180) mg/m3 for 4 weeks. The concentration of mercury in the exposure chamber was measured every day using a mercury survey meter (EMP-1A, Nippon Instruments Co., Tokyo, Japan). For methylmercury (CH3Hg+) exposure, methylmercury chloride (GL Sciences Inc., Tokyo, Japan) was diluted with distilled water to prepare a 5 ppm solution. The solution containing 5 ppm methylmercury was given ad libitum instead of tap water. After 4 weeks of exposure, the cerebrum and cerebellum were removed from each mouse under ether anesthesia.

2.3. Analysis of Mercury Concentrations in Tissues

3.2. Total Mercury Concentrations in the Cerebrum and Cerebellum

3.3. The Levels of MT-I, MT-II, MT-III mRNAs in the Cerebrum and Cerebellum after Mercury Exposure

3.4. Changes in Expression of Chemokine Genes in the Cerebrum in Response to Mercury Exposure

3.5. Changes in Expression of Chemokine Genes in the Cerebellum after Mercury Exposure

MT-III is highly expressed in neurons [17], and also shows a protective effect against brain diseases [18,19]. Mercury compounds, such as methylmercury and mercury vapor, are harmful substances that cause disorders of the CNS, but the influence of MT-III on the disorders caused by these mercuric compounds is poorly understood. Recently, methylmercury has been reported to increase expression of the chemokine genes, Ccl3, Ccl4, Ccl7, Ccl12 and Cxcl10 in the mouse brain [20,21,27]. The most highlighted knowledge in this study is that Ccl3 expression in the cerebrum and the cerebellar expression of Ccl12 and Cxcl10 were significantly different between wild-type mice and MT-III null mice only in the methylmercury exposure. MT-III is abundantly expressed in the normal brain; on the other hand, in a brain with Alzheimer’s disease, MT-III expression is largely reduced [17]. It was suggested that MT-III might have a protective role in cerebral ischemia [28]. Furthermore, inflammatory factors are upregulated upon the brain damage, as it increases phagocytosis and the release of inflammatory mediators [29,30]. The present study suggests that the increase in chemokine expression may be involved in methylmercury-triggered brain damage with topical specificity. The present study also suggest that MT-III may be the cause of the difference in inflammatory response upon methylmercury exposure.
Our present study revealed that the MT-III deficiency had no effect on mercury concentration in the brains of mice exposed to mercury compounds; however, the MT-III deficiency influenced the expression of chemokine genes in response to mercury exposure. The expression of Ccl12 and Cxcl10 in the cerebrum was increased in the wild-type mice by methylmercury; but not in the cerebrum of MT-III null mice. Moreover, in response to mercury vapor exposure, Ccl3 expression in the cerebellum was not changed in the MT-III null mice, but was significantly elevated in the wild-type mice. In the cerebellum of wild-type mice, the expression of Ccl7 was not changed by mercury vapor exposure and that of Cxcl10 was not changed by methylmercury exposure; however, they were significantly elevated in the MT-III null mice. Indeed, the fluctuation in Cxcl10 expression in response to methylmercury was observed in the cerebrum of wild-type mice, and in the cerebellum of MT-III null mice. Taken together, these findings indicate that MT-III may affect the expression of some chemokine genes in response to different mercury compounds differently in the cerebrum and cerebellum. In recent years, MT-I and MT-II have been reported to be involved in inflammatory reactions in cardiomyocytes [31]. The present study indicates that MT-III may be involved in inflammatory reactions consequent to an exogenous stress on the brain.
Chemokines are associated with inflammatory damage in a number of tissues, including the brain [23,24,25,26]. Chemokines may function as signaling molecules in the CNS [32]. Accordingly, the expression of several chemokines increases with hypoglossal nerve damage, however the role of chemokines in cranial nerves remains unclear. Methylmercury induces a brain-specific increase in Ccl4 expression in mice [21]. In addition, it is assumed that CCL4 is involved in the pathway mediating the toxicity of methylmercury in the CNS [33,34]. In this study, methylmercury induced Ccl4 gene expression in the cerebellum not only in the wild-type mice but also in the MT-III null mice. Therefore, CCL4 may be an important factor mediating methylmercury toxicity.
Previous studies revealed that postnatal mice exposed to 0.188 mg/m3 mercury vapor or 3.85 ppm methylmercury showed a decrease in total locomotive activity in the OPF [35]. In this study, we exposed the mice to similar doses of mercury compounds. Because several chemokine gene expressions were increased in brain tissues of wild-type mice, chemokine genes may be associated with the influence of mercury exposure in childhood on neuronal development.
MT-I/II null mice showed an enhanced adverse effect of neonatal mercury (HgCl2) exposure [19]. Moreover, MT-I/II null mice exposed to mercury vapor showed decreased locomotor activity [36,37]. Furthermore, the highly sensitive methylmercury toxicity in MT-I/II deficient astrocytes was rescued by the introduction of the MT-I gene [38]. Thus, MT-I and MT-II were suggested to be involved in mercury compound induced neuropathy, but the role of MT-III in neuropathy caused by mercury compounds is almost unknown. Our present study revealed that MT-III deficiency is involved in mercury-induced neuropathy through changing cerebral chemokine gene expression.

This research was supported by a research grant from the Institute of Pharmaceutical Life Sciences, Aichi Gakuin University. 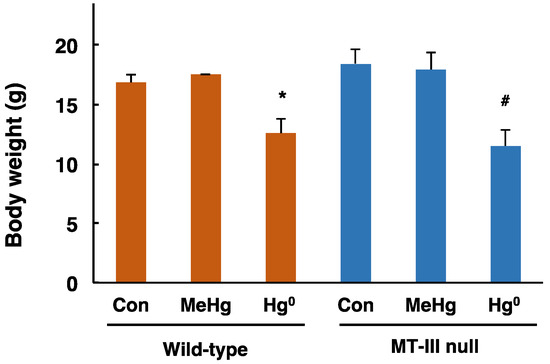 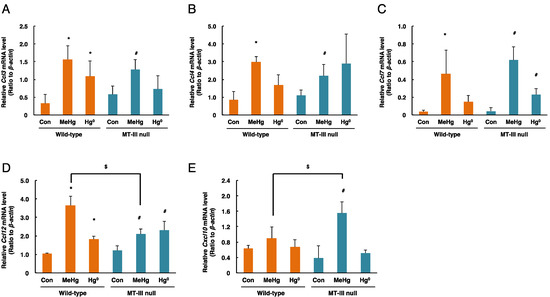