Biomarkers of environmental metal exposure in children are important for elucidating exposure and health risk. While exposure biomarkers for As, Cd, and Pb are relatively well defined, there are not yet well-validated biomarkers of Mn exposure. Here, we measured hair Mn, Pb, Cd, and As levels in children from the Mid-Ohio Valley to determine within and between-subject predictors of hair metal levels. Occipital scalp hair was collected in 2009–2010 from 222 children aged 6–12 years (169 female, 53 male) participating in a study of chemical exposure and neurodevelopment in an industrial region of the Mid-Ohio Valley. Hair samples from females were divided into three two centimeter segments, while males provided a single segment. Hair was cleaned and processed in a trace metal clean laboratory, and analyzed for As, Cd, Mn, and Pb by magnetic sector inductively coupled plasma mass spectrometry. Hair Mn and Pb levels were comparable (median 0.11 and 0.15 µg/g, respectively) and were ~10-fold higher than hair Cd and As levels (0.007 and 0.018 µg/g, respectively). Hair metal levels were higher in males compared to females, and varied by ~100–1000-fold between all subjects, and substantially less (<40–70%) between segments within female subjects. Hair Mn, Pb, and Cd, but not As levels systematically increased by ~40–70% from the proximal to distal hair segments of females. There was a significant effect of season of hair sample collection on hair Mn, Pb, and Cd, but not As levels. Finally, hair metal levels reported here are ~2 to >10-fold lower than levels reported in other studies in children, most likely because of more rigorous hair cleaning methodology used in the present study, leading to lower levels of unresolved exogenous metal contamination of hair. View Full-Text
Keywords: manganese; lead; cadmium; arsenic; hair; children; environment manganese; lead; cadmium; arsenic; hair; children; environment
►▼ Show Figures 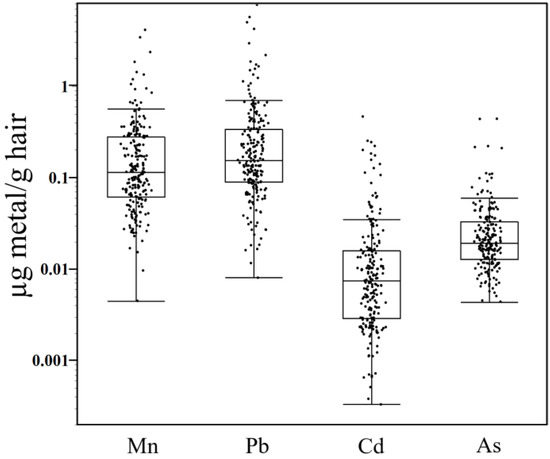