Effects of Estrogen, Nitric Oxide, and Dopamine on Behavioral Locomotor Activities in the Embryonic Zebrafish: A Pharmacological Study

Nitric oxide (NO) has been shown to affect motor function. Specifically, NO has been shown to act through regulation of dopamine (DA) release, transporter function, and the elicitation of neuroprotection/neurodegeneration of neurons. Recently, zebrafish have been proposed to be a new model for the study of various types of motor dysfunctions, since neurotoxin damage to their nigrostriatal-like neurons exhibit motor anomalies similar to those of mammalian models and human patients. Results from this study demonstrate that when NO synthesis is inhibited in zebrafish, using a neuronal NO synthase inhibitor (nNOSI), a condition called ‘listless’ occurs, where the fish lack swimming abilities, are rigid, and have difficulty maintaining balance. Additionally, co-treatment with either NO or estrogen (E2), an upstream regulator of NO synthase, can rescue fish from the ‘listless’ phenotype caused by exposure to the neurotoxin 6-hydroxydopamine (6 OHDA). In turn, NO deprived zebrafish were rescued from the ‘listless’ phenotype when co-treated with L-DOPA, a precursor to DA. Interestingly, the longer fish are exposed to a 6 OHDA + nNOSI co-treatment, the slower the recovery after washout, compared to a single treatment of each. Most significantly, NO involvement in the motor homeostasis of the embryonic zebrafish was shown to be expressed through the NO-cGMP-dependent pathway, and response to nNOSI treatments is developmentally regulated. In conclusion, these results indicate that there is a link between E2, NO, and DA systems that regulate motor functions in the embryonic zebrafish. View Full-Text
Keywords: nitric oxide; estrogen; motor dysfunction; dopamine; 6-hydroxydopamine neuronal toxicity; zebrafish nitric oxide; estrogen; motor dysfunction; dopamine; 6-hydroxydopamine neuronal toxicity; zebrafish
►▼ Show Figures 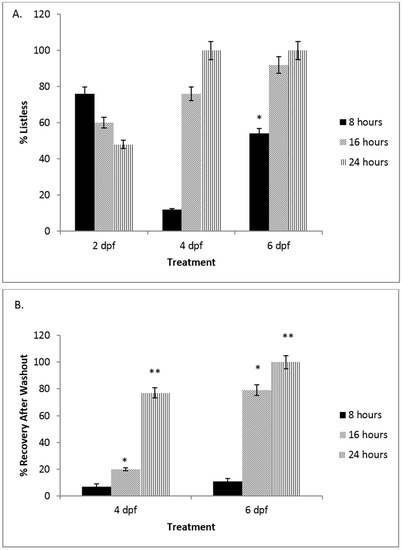