Background: The impact of very low levels of air pollutants, particulate matter (PM10) and sulfur dioxide (SO2) concentrations, on human health is not well characterized. We examined the outcomes (30-day in-hospital mortality) of emergency hospitalizations of respiratory patients and the level of local pollutants on the day of admission. Methods: All emergency admissions (82,421 episodes in 44,660 patients) were recorded over 13 years (2002–2014) and mortality assessed. The median interquartile ranges (IQR) age was 64.5 (43.9, 78.5) years with the proportion of males at 48.5%. Univariate and multivariate logistic regression was used to examine relationships between pollutant concentration (PM10 and SO2) and odds ratio (OR) for 30-day in hospital death, after adjustment for acuity. Results: Mortality related to each pollutant variable assessed (as quintiles of increasing atmospheric concentration). For PM10 mortality, the highest two quintiles concentrations were significantly increased (p < 0.001) with univariate ORs of 1.30. For SO2, the ORs were 1.32, 1.39, and 1.46, for the top three quintiles. There was also a strong relationship between the underlying respiratory function; with forced expiratory volume (FEV1) in 1 second (FEV1) ≥ 2.0L at the lowest PM10 quintile, mortality was 6.5% (95% CI: 6.1, 6.9) increasing to 9.5% (95% CI: 9.0, 10.0) at the highest PM10 quintile. For patients with FEV1 < 2.0L, the mortality at the lowest PM10 quintile was 9.9% (95% CI: 8.8, 10.9) increasing to 14.2% (95% CI: 12.8, 15.6) at the highest quintile. Conclusion: Despite air quality improvement, there was a clear relationship between pollutant concentration and outcomes for respiratory emergency admissions; additionally, the underlying level of pulmonary function was predictive of in-hospital mortality. View Full-Text
Keywords: air pollution; particulate matter; sulphur dioxide; emergency medical admission air pollution; particulate matter; sulphur dioxide; emergency medical admission
►▼ Show Figures 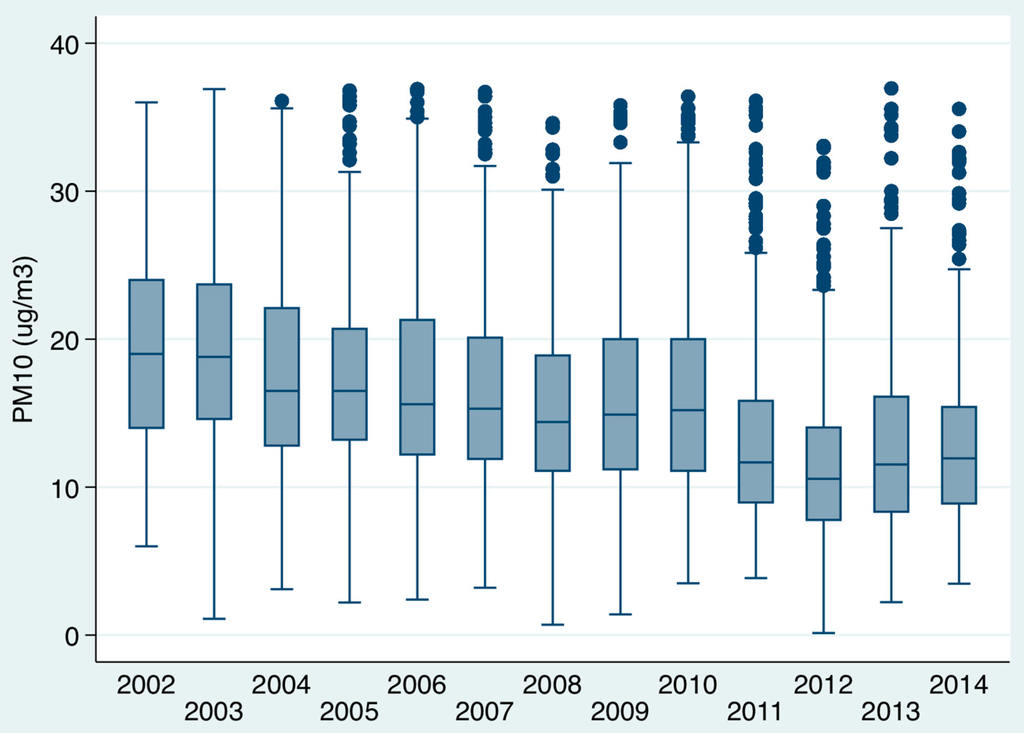