How Fermentation Affects the Antioxidant Properties of Cereals and Legumes

The major role of antioxidant compounds in preserving food shelf life, as well as providing health promoting benefits, combined with the increasing concern towards synthetic antioxidants, has led the scientific community to focus on natural antioxidants present in food matrices or resulting from microbial metabolism during fermentation. This review aims at providing a comprehensive overview of the effect of fermentation on the antioxidant compounds of vegetables, with emphasis on cereals- and legumes- derived foods. Polyphenols are the main natural antioxidants in food. However, they are often bound to cell wall, glycosylated, or in polymeric forms, which affect their bioaccessibility, yet several metabolic activities are involved in their release or conversion in more active forms. In some cases, the antioxidant properties in vitro, were also confirmed during in vivo studies. Similarly, bioactive peptides resulted from bacterial and fungal proteolysis, were also found to have ex vivo protective effect against oxidation. Fermentation also influenced the bioaccessibility of other compounds, such as vitamins and exopolysaccharides, enabling a further improvement of antioxidant activity in vitro and in vivo. The ability of fermentation to improve food antioxidant properties strictly relies on the metabolic activities of the starter used, and to further demonstrate its potential, more in vivo studies should be carried out. View Full-Text
Keywords: Lactic acid bacteria; fungi; phenolic compounds; bioactive peptides; grains Lactic acid bacteria; fungi; phenolic compounds; bioactive peptides; grains
►▼ Show Figures 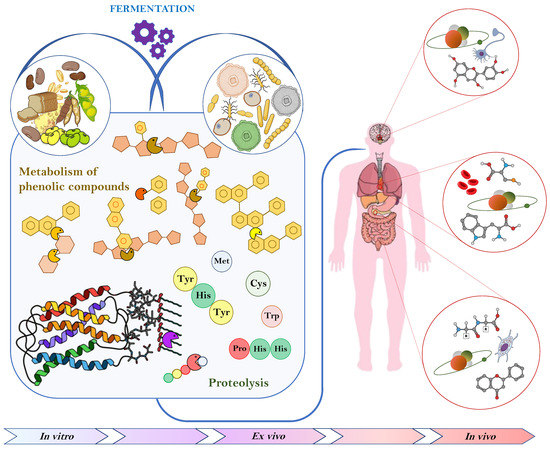