The objective of this study was to determine the concentrations of 20 minerals in the whole raw milk from Holstein dairy cows in the province of Alberta, Canada. A total of 156 milk samples were collected from 26 dairy farms (n = 6 per farm) and analyzed with inductively coupled plasma mass spectrometry (ICP-MS) for five macrominerals (Ca, Mg, P, K, and Na), ten microminerals (Bo, Co, Cu, Fe, Mn, Mo, Ru, Se, St, and Zn), and five heavy metals (Al, As, Cd, Cr, and Pb). Calculated means were compared with their recommended daily intakes (RDIs) or minimal risk levels (MRLs) obtained from several food safety agencies and with data obtained from a world meta-analytical study we conducted previously. Results of the present study showed differences in the concentrations of multiple minerals between the Alberta farms involved and world averages (WA) and within Alberta farms. Concentrations of macrominerals, including Ca, Mg, P, K, and Na, in the raw milk were greater in Alberta dairy farms than the WA (p < 00.5; except Ca). Of note, concentrations of Ca showed the highest variability among Alberta farms, with 11 farms having lower milk Ca than WA. The other macrominerals were higher than WA in more than 88% of Alberta farms. Data demonstrated that concentrations of microminerals, including Co, Cu, Fe, Mn, and Mo, in Alberta raw milk were lower compared with WA (p < 0.05). Selenium was the only element in raw milk that was found to have higher concentrations in all farms in Alberta vs. WA. High variability was observed for B, Sr, and Zn, which were lower in multiple locations around the province. Concentrations of heavy metals in the Alberta raw milk, including Al, As, Cd, and Pb, were lower than WA, whereas concentrations of Cr were higher. Most importantly, all heavy metals were below their respective MRLs in all analyzed samples. Overall, data from this study showed that raw milk from Holstein dairy cows in Alberta has concentrations of most mineral elements below their MRLs and some of them different from WA. Of note, although concentrations of Se and Zn in the raw milk were higher in Alberta compared with WA, their concentrations were still below their respective MRLs.
Keywords: whole raw milk; milk minerals; production system; heavy metals; food safety whole raw milk; milk minerals; production system; heavy metals; food safety

Milk contains essential components with different biological functions, including nutrients such as amino acids, fatty acids, proteins, vitamins, and minerals as well as immunoglobulins and antimicrobials, but at the same time, it might contain potentially harmful amounts of metals. The composition of dairy products reflects neonatal requirements for growth and development and immunological protection. For this reason, milk consists of significant amounts of proteins, fat, fat- and water-soluble vitamins, and minerals [1,2,3].
Milk composition has been reported to be associated with the breed of cattle, diet provided to dairy cows, minerals and vitamins supplementation, production management system, soil, and the use of pesticides or insecticides to the feedstuff provided to dairy cows [4]. Those factors, in combination with the growing environment pollution, agricultural, and urban emissions, are some of the reasons that milk and dairy products may contain toxic chemical pollutants [5]. Heavy metals such as cadmium (Cd), chromium (Cr), lead (Pb), or nickel (Ni) accumulate in plant materials and consequently pass into the milk and milk products. Recently, we reported that concentrations of two heavy metals including Cd in the raw milk from several areas of India, Nigeria, Palestine, and Slovakia, and Pb from several areas of Brazil, Croatia, Egypt, India, Mexico, Nigeria, Palestine, Serbia, and Turkey were above their MRLs (minimum risk levels) [6]. However, to the best of our knowledge, there is no data published with regards to content of milk metals in the raw milk of dairy cows in Canada. Consumption of milk surpassing the MRLs for heavy metals may lead to replacement of essential metal ions in the body and trigger harmful health effects [7]. Therefore, measurement of metals in the milk is of utmost importance to safeguard this nutritious product from potential contamination with heavy metals [8].
Improvements in the identification and quantification of metals in liquids by mass spectrometry (MS) has made it possible to accurately measure concentrations of a multitude of metals in milk. To date, the most commonly used analytical procedure for quantification of minerals involves inductively coupled plasma mass spectroscopy (ICP-MS) or inductively coupled plasma atomic-emission spectroscopy (ICP-AES) [1,9]. It is obvious that more research needs to be conducted in this field to address consumers’ concerns with regards to mineral content of milk, especially the concentrations of heavy metals. Indeed, in a recent meta-analytical study, we investigated mineral status of dairy cow raw milk from 37 countries and three types of production systems, including conventional (CONV), organic, and commercial (COMM) or retail store. Data showed that the organic milk has the lowest concentrations of the reported heavy metals versus the conventional and retail store milk [6]. Moreover, several heavy metals were found to be present in concentrations higher than the MRLs for the identified metals (Pb, As, and Hg) in several countries and areas of the world. To the best of our knowledge, there are no published data with regards to concentration of metals in the raw milk of dairy cows in Alberta or Canada. Therefore, the objective of this study was to quantify major macro- and microminerals as well as several heavy metals in the raw milk of Holstein dairy cows from 26 dairy farms in the province of Alberta. The aim is to compare results of this study with data collected and reported in our recently published meta-analytical study related to raw milk metals reported from different countries and with regards to the management system (organic, conventional, or retail store milk world-wide) [6]. The second aim is to provide important information to dairy producers in Alberta, Canada and beyond, as well as to nutritionists, nutrition advisors or consultants, food safety specialists, and different consumer groups with regards to milk metal content.

A total of 156 samples of raw milk were collected from 26 different farms in Alberta, Canada, from the northern, central, and southern regions of the province, in regions surrounding the cities of Edmonton, Red Deer, and Lethbridge (i.e., Northern, Central, and Southern Alberta areas, respectively). These three regions have different feeding regimens, with the northern region feeding mostly barley grain and forage, central feeding both corn and barley grain and forage, and the southern one feeding mostly corn grain and silage. Of note, we have not conducted soil or feedstuff mineral analyses in this study. Each of the 26 dairy farms had six samples analyzed. The study was conducted with the consent and agreement between Alberta Milk and CanWest DHI Lab and it was funded by Alberta Milk (dairy industry in Alberta) and the University of Alberta. All milk samples analyzed were provided during 2015 by CanWest DHI Laboratory in Edmonton, Alberta, Canada.

For each mineral, weighted mean and its associated variance, standard deviation, and standard error were calculated using the following models: where:
To quantify the differences in concentration of each analyzed variable in different types of milk, all data were subjected to modeling analysis using t-test for means with unequal variances (Alberta vs. COMM (Commercial), Alberta vs. CONV (Conventional)): where:
Subsequently degrees of freedom (df) were calculated using following equation: where:
Results of each t-test were compared with critical values of student t distributions table at p ≤ 0.05. Calculated means for each mineral were compared with their respective recommended daily intake values (RDIs for macrominerals) or minimum risk levels (for heavy metals) obtained from the World Health Organization (WHO), the USA Agency for Toxic Substances and Disease Registry (ATSDR), Food and Drug Administration (FDA) daily values, European Food Safety Authority (EFSA), and Australian National Health and Medical Research Council [10,11,12,13].

Overall, to the best of our knowledge, this is the first study analyzing raw milk minerals in dairy farms in the province of Alberta, Canada. Data from this study indicate that Alberta milk has a safe mineral content for human consumption. Alberta milk is a good source of Ca and P, covering more than 40% of their RDIs for both minerals. On the other hand, Alberta raw milk offers lower than WA amounts but normal amounts of Mg, P, and Na. Considering consumption of other food sources in the diet, this suggests that Alberta raw milk provides substantial amounts for these minerals. Regarding average concentrations of microminerals and trace elements in the raw milk of Alberta dairy cows, greater concentrations of Se and Zn were found in the raw milk compared with the world CONV milk. Nevertheless, the calculated means for those two metals still were below their respective MRLs. The most important conclusion drawn from this study is that concentrations of heavy metals in the Alberta raw milk are significantly lower than the calculated means of all those elements compared with the WA. Alberta raw milk had high Cr content, albeit within its RDI, but it must be noted that only Cr6+ is considered harmful to humans and this study cannot conclude whether Cr6+ was high. Further investigation needs to determine the type of Cr valency contained in Alberta milk.
There were very few differences among the three regions of Alberta (Northern, Central, and Southern) with regards to mineral content of raw milk, including greater concentrations As and Rb and lower concentrations of B in the Northern region vs. the Central and Southern which might be related to the soil composition, origin of grain and forages, as well as water sources and mineral supplements.

Conceptualization and methodology, B.N.A; Data curation and laboratory analysis B.N.A, and G.Z; Project administration, B.N.A.; Project supervision, B.N.A.; All authors have been involved in developing, writing, and commenting on the manuscript; Statistics, G.Z.

This study was supported financially from the University of Alberta and Alberta Milk Dairy Research Endowment Fund.

We thank CanWest DHI for providing all the necessary raw milk samples from various Alberta dairy farms as well as Alberta Milk for agreeing to support this project as a member partner of the Endowment Fund. We also thank Monika Zwierzchowska for preparing charts and the TOC graphs. 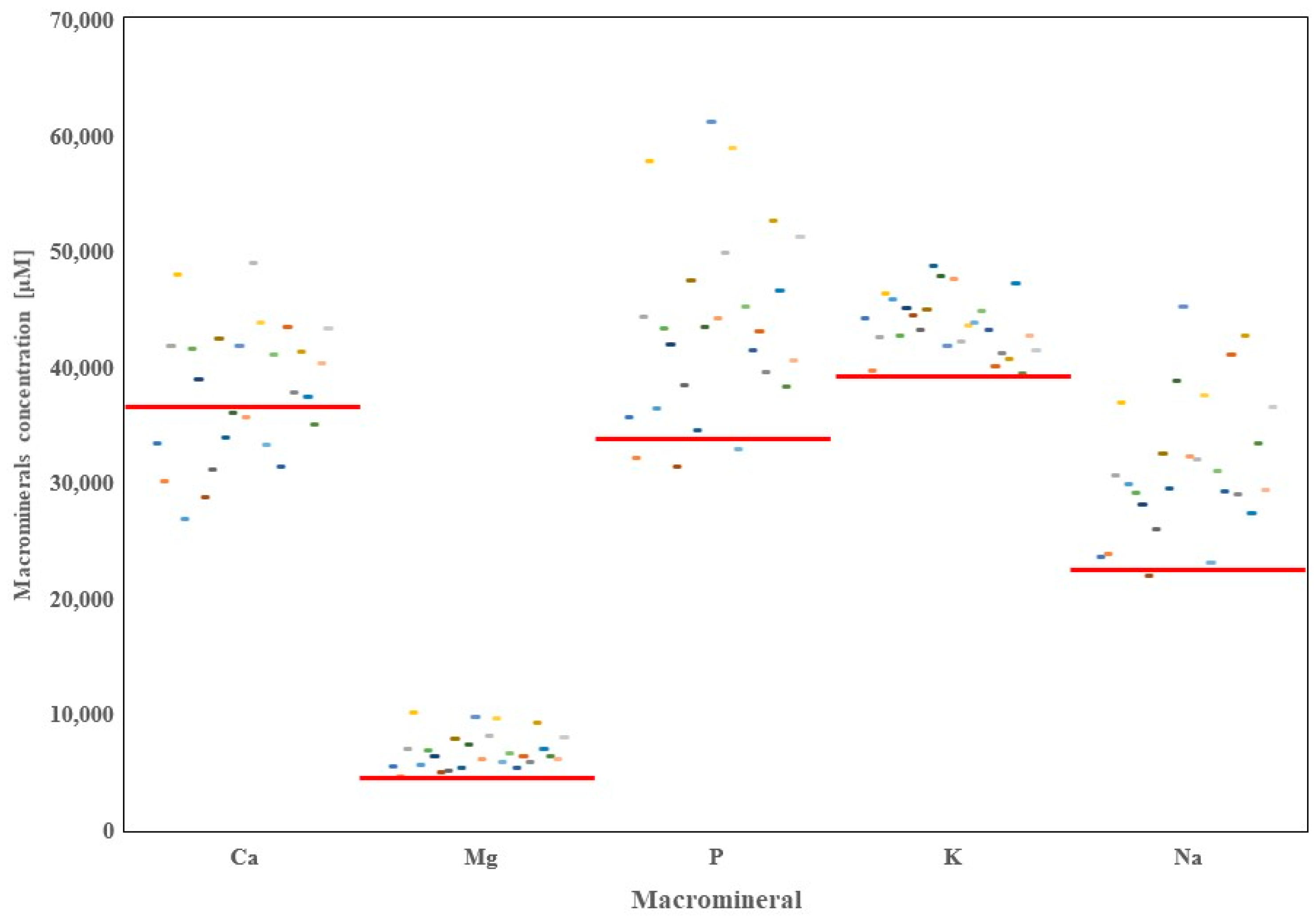 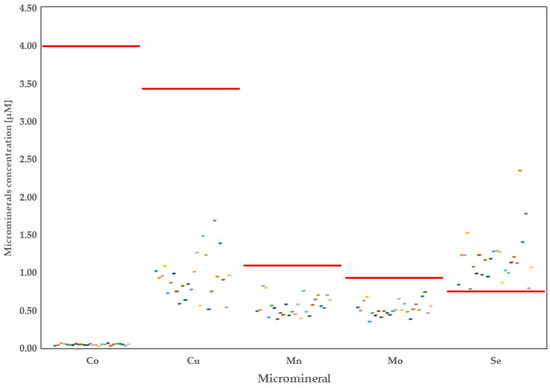 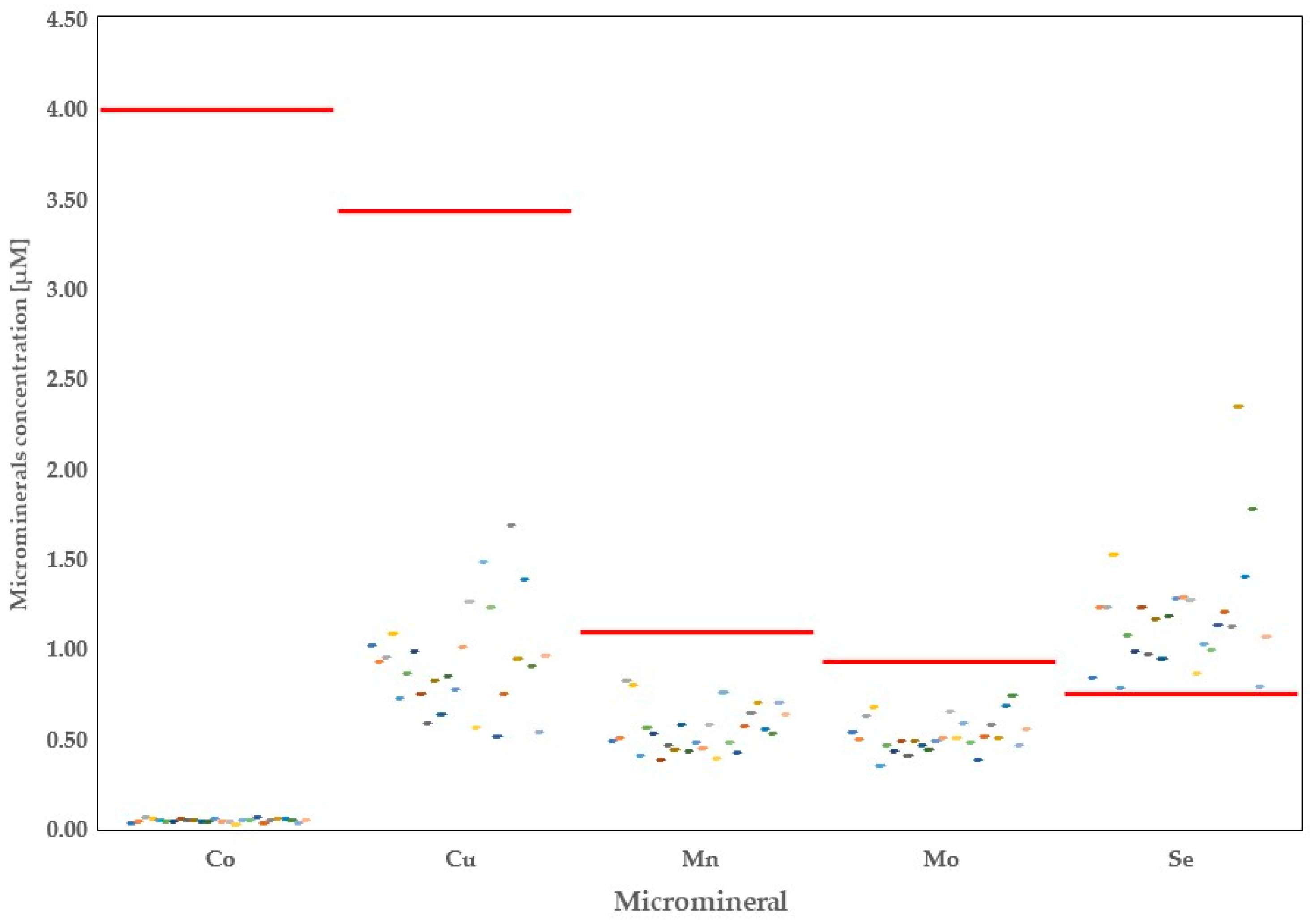 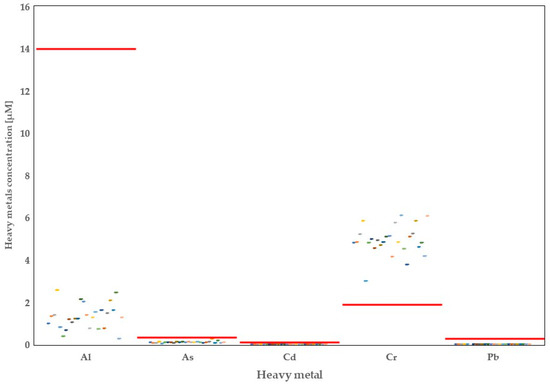