Effect of Different Flours on the Formation of Hydroxymethylfurfural, Furfural, and Dicarbonyl Compounds in Heated Glucose/Flour Systems
Previous Article in Journal

Evaluation of the Availability and Antioxidant Capacity of Maillard Compounds Present in Bread Crust: Studies in Caco-2 Cells

Bread crust is one of the major contributors to the intake of Maillard reaction products (MRP). MRP improve the organoleptic properties of foods and can provide biological actions such as antioxidant properties. The transport and availability of Amadori compounds (measured as furosine) and hydroxymethylfurfural (HMF)—early and intermediary MRP—from enzymatically digested bread crust (BC) and from its soluble low-molecular weight (LMW) and high-molecular weight (HMW) fractions were investigated in the Caco-2 cell line. The absorption of the early and final MRP pool was tested by measuring the absorbance recovery (280 and 420 nm). The ability of soluble BC or its fractions to lessen the production of reactive oxygen species (ROS) was examined. Amadori compounds (furosine) were transported across Caco-2 cell monolayers from the soluble BC in percentages ranging between 40% and 56%; the lower amount of the compound supplied, the higher transport rate. However, HMF transport rate (35%) was unaffected by the initial amount of the compound. Amadori compounds and HMF contained in the LMW fraction were more efficiently transported than those present in the HMW fraction, suggesting improved absorption when supplied as free forms or linked to LMW compounds. Absorbance recovery at 280 nm was higher from the LMW fraction, whereas higher recovery was detected for the HMW fraction at 420 nm. The digested BC—but not its isolated fractions—was able to significantly reduce ROS production at basal conditions and after subjecting cells to an oxidant. A clear positive action of BC on the antioxidant defence is manifested, seemingly attributable to the combined presence of soluble LMW and HMW products. View Full-Text
Keywords: Amadori compounds; hydroxymethylfurfural; bread crust; Maillard reaction products (MRP); Caco-2 cells; availability; reactive oxygen species (ROS); protective action Amadori compounds; hydroxymethylfurfural; bread crust; Maillard reaction products (MRP); Caco-2 cells; availability; reactive oxygen species (ROS); protective action
►▼ Show Figures 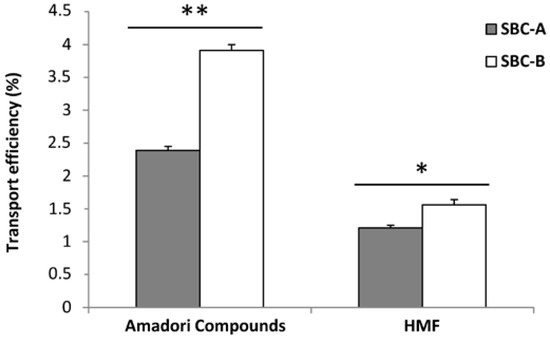