Photograph Based Evaluation of Consumer Expectation on Healthiness, Fullness, and Acceptance of Sandwiches as Convenience Food
Previous Article in Journal

Food Puree for Seniors: The Effects of XanFlax as a New Thickener on Physicochemical and Antioxidant Properties

Biochemical juice attributes and color-related traits of muscadine grape genotypes have been investigated. For this study, 90 muscadine genotypes, including 21 standard cultivars, 60 breeding lines, and 9 Vitis x Muscadinia hybrids (VM), were evaluated. The biochemical properties of total soluble solids (TSS), titratable acidity, and TSS/Acid (T/A) ratio showed modest diversity among genotypes with a range of 10.3 °Brix, 2.1 mg tartaric acid/L, and 4.6, respectively. Nonetheless, the pH trait exhibited a tight range of 0.74 among the population with a minimum and maximum pH of 3.11 ± 0.12 and 3.85 ± 0.12. Color-related traits showed more deviation between individuals. Total anthocyanin content (TAC), luminosity index (L*), hue angle (h°), and chroma index (C*) displayed a range of 398 µg/g DW, 33.2, 352.1, and 24, respectively. The hierarchical clustering map classified the population into two large groups of colored and non-colored grapes based on L* and h°, suggesting the predominance of these two characters among the population. The colored berries genotypes clade was further divided into several sub-clades depending on C*, TAC, and TSS levels. The principal component analysis (PCA) separated the four-color characteristics into two groups with a negative correlation between them, L* and C* versus TAC and h°. Further, PCA suggested the positive influence of acidity in enhancing the different nutraceutical components. Despite the nature of anthocyanins as a member of phenolic compounds, a lack of significant correlation between TAC and nutraceutical-related traits was detected. The dissimilatory matrix analysis highlighted the muscadine individuals C11-2-2, E16-9-1, O21-13-1, and Noble as particular genotypes among the population due to enhanced color characteristics. View Full-Text
Keywords: acidity; anthocyanin; chroma index; hue angle; total soluble solids acidity; anthocyanin; chroma index; hue angle; total soluble solids
►▼ Show Figures 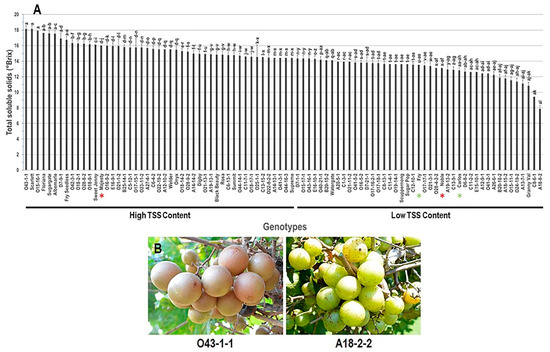