Condylar Neck and Sub-Condylar Fractures: Surgical Consideration and Evolution of the Technique with Short Follow-Up on Five Cases
Previous Article in Journal

Impact of Local Drug Delivery of Minocycline on the Subgingival Microbiota during Supportive Periodontal Therapy: A Randomized Controlled Pilot Study

To evaluate the effect of adjunctive antiseptic irrigation of periodontal pockets on microbial and cytokine profiles. Fifty-nine patients with severe periodontitis were allocated to one of three groups for scaling and root planing facilitated with different adjunctive antiseptics: 1% polyhexamethyleneguanidine phosphate (PHMG-P) (n = 19), 0.2% chlorhexidine (CHX) (n = 21) or distilled water (n = 19). Gingival crevicular fluid and subgingival bacterial samples were collected at baseline, and at 2 weeks, and 1 and 4 months. The levels of interleukin (IL)-1β, IL-8, IL-10, and IL-17A, matrix metalloproteinase (MMP)-8, Porphyromonas gingivalis, Tannerella forsythia, Treponema denticola, Fusobacterium nucleatum,Aggregatibacter actinomycetemcomitans, and Prevotella intermedia were determined. There were no intergroup differences in cytokine concentrations and bacterial counts at any follow-up, however, varying patterns were observed. In the PHMG-P and water groups IL-1β expression peaked at 2 weeks and then gradually declined. In all three groups, the dynamics of MMP-8 concentration were non-linear, increasing by 2 weeks and then declining to below baseline (p > 0.05). P. gingivalis and T. forsythia declined within the first month and increased thereafter, not regaining the baseline level. Adjunctive antiseptic treatment was associated with changes in biomarkers and bacterial counts in the course of the study. The effects of adjunctive antiseptic irrigation were limited in the applied protocol. View Full-Text
Keywords: inflammation; periodontitis; chlorhexidine; polyhexamethylene guanidine phosphate; irrigation inflammation; periodontitis; chlorhexidine; polyhexamethylene guanidine phosphate; irrigation
►▼ Show Figures 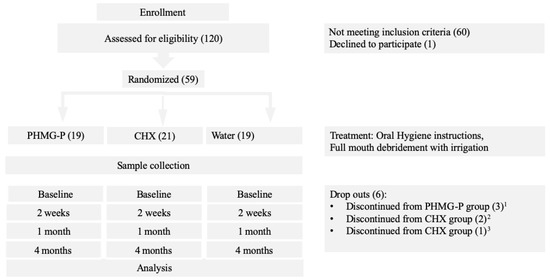