Optimization of the Synthesis and Energy Transfer of Ca2MgWO6:Cr3+,Nd3+
Previous Article in Special Issue

A mononuclear ruthenium complex, [RuII(L)(bpy)2](PF6), with a naphthoquinone-annelated imidazole ligand HL (2-(pyridin-2-yl)-1H-naphtho[2,3-d]imidazole-4,9-dione) was synthesized and structurally characterized. Electrochemical study reveals that the Ru complex shows four reversible redox waves at +0.98 V, −1.13 V, −1.53 V, and −1.71 V versus SCE in acetonitrile, which are assigned to Ru(II)/Ru(III), L−/L•2−, and two bpy/bpy•− redox couples, respectively. The redox potential of Ru(II)/Ru(III) was positively shifted upon the addition of trifluoromethanesulfonic acid due to protonation of the L− moiety, leading to stabilization of the Ru 4d orbital. In UV-vis absorption measurements for the Ru complex in acetonitrile, a metal-to-ligand charge transfer (MLCT) band was observed at 476 nm, which was shifted to 450 nm by protonation, which might be due to a decrease in the electron delocalization and stabilization of the π orbitals in L−. The blue shift of the MLCT band by protonation was associated with a shift of an emission band from 774 nm to 620 nm, which could be caused by the decreased electronic delocalization in the MLCT excited state. These electrochemical and spectroscopic changes were reversible for the protonation/deprotonation stimuli. View Full-Text
Keywords: Ru(II) complex; single-crystal X-ray crystallography; electrochemistry; luminescence Ru(II) complex; single-crystal X-ray crystallography; electrochemistry; luminescence
►▼ Show Figures 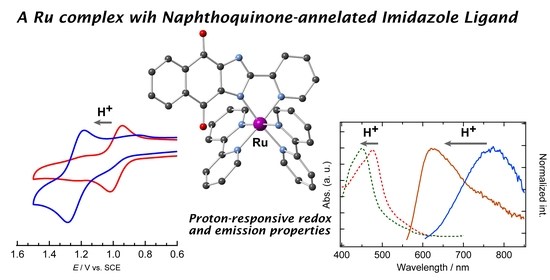