In the context of current studies of materials with large spin-orbit coupling as topological materials [1,2], compounds of heavy elements attract widespread interest. Bismuth compounds and especially halides are in special focus as their atomic arrangements often exhibit low-symmetry patterns caused by the stereochemical activity of lone pairs [3,4,5,6]. Moreover, their structural and physical properties can be substantially modified by application of hydrostatic pressure [7,8,9,10].
The ambient pressure form of BiI3 [11,12] is one of the most frequent structure types for compounds MX3 (M = metal, X = Cl, Br, I). The motif consists of a slightly distorted hexagonal close packing of halide atoms with the metal atoms occupying 2/3 of the octahedral voids in every second layer in an ordered fashion. Displacement of the metal atoms with respect to the center of the octahedra is attributed to the stereochemical activity of lone pairs located on the bismuth atoms. In AsI3 and SbI3, the difference between short and long bonds is suppressed by applying hydrostatic pressures of 5 and 2 GPa, respectively [13,14,15,16].
Earlier high-pressure investigations on BiI3 [13] revealed a structural transformation at pressures slightly exceeding 4 GPa. The high-pressure structure of BiI3 was assigned to the monoclinic structure type of SbI3, but the diffraction data were measured without using a pressure-transmitting medium and showed clear indications of non-hydrostatic pressure conditions. Thus, we reinvestigated the nature of the high-pressure polymorph of BiI3 by performing high-resolution high-pressure investigations under hydrostatic pressure conditions using helium as the pressure transmitting medium. The pressure-induced changes of the electronic band gap are characterized by the measurements of the optical absorbance in the visible range. In addition, the changes of the electronic structure as well as those of the chemical bonding are studied by means of DFT full-potential electronic band structure calculations.

For the powder X-ray diffraction experiments, commercially available BiI3 (Alfa Aesar, 99.999%; Thermo Fischer GmbH, Kandel, Rhineland-Palatinate, Germany,) was further purified by sublimation. Some of the obtained crystals were ground in the argon atmosphere of a glove box (H2O, O2 < 0.1 ppm) using an agate mortar. The particles smaller than 20 μm as selected by means of sieving were annealed in a sealed quartz ampoule at 500 K for one day in order to reduce the number of stacking faults which were induced by the grinding. Again, particles smaller than 20 μm were separated by sieving and the resulting powder was transferred into diamond anvil cells (Figure 11) with a culet size of 300 and 600 μm, respectively. As gasket materials, stainless steel or rhenium were used. For pressure redistribution, pressurized helium as a liquid medium was used. Pressure was measured using the luminescence shift of a small ruby chip located close to the sample [24]. The collected two dimensional images were integrated [25] and refined by means of full profile analysis [26].
To determine the compressibilities, second order Murnaghan-type equations of state were fitted by applying least squares routines to the experimental data. The metrical parameters at ambient pressure were taken from X-Ray powder diffraction data on a laboratory source (Huber Guinier G670, Huber Diffractionstechnik, Rimsting, Bavaria, Germany; CuKα1 radiation) with LaB6 as standard using the program WinCSD [26]. The positions at ambient pressure were taken from the most elaborate single crystal refinement [12].
For the optical measurements, ultra-dry BiI3 (Alfa Aesar, 99.998%) was purified by sublimation from 320 to 200 °C. In a second process, crystals of this refined BiI3 were grown by subliming the material from 275 to 200 °C. Suitable specimens of BiI3 were selected and placed in a Syassen-Holzapfel diamond anvil cell (DAC) [27], equipped with type IIa diamonds suitable for infrared measurements. The maximal generated pressure amounted to 24 GPa. Pressure-dependent transmittance measurements were carried out at room temperature in the frequency range 0.3–1.9 eV with a Bruker Vertex 80v Fourier transform infrared spectrometer (Bruker Optik, Ettlingen, Baden-Württemberg, Germany) coupled with a Bruker Hyperion infrared microscope with a 15× Cassegrain objective. For the in situ pressure determination the ruby luminescence technique was applied [24] and CsI powder served as quasi-hydrostatic pressure transmitting medium. For obtaining the transmittance spectra, the intensity transmitted through the sample Is was divided by the intensity transmitted through the pressure transmitting medium Iref, according to T(ω) = Is(ω)/Iref(ω). From the transmittance spectrum T(ω) the absorbance spectrum was calculated according to A(ω) = −log10T(ω).
Electronic structure calculations were performed by using two all electron, atom-centered numerical orbital full-potential methods, namely the Fritz-Haber Institute ab initio molecular simulations (FHI-aims) [28] and the full-potential local orbital (FPLO) [29] methods. The local density approximation (LDA) to the density functional theory as parametrized by Perdew and Wang was employed [30]. The experimentally determined crystal structure data for the ambient and high pressure modifications were used in the calculations. The electronic densities of states (DOS) were computed by the FPLO method within both scalar and fully-relativistic treatments. In these calculations, the first Brillouin zone (BZ) was sampled with meshes of 20 × 20 × 20 and 16 × 16 × 16, respectively. Chemical bonding was analyzed in real space based on the combined topological analysis of electron density (ED) and electron localizability indicator (ELI) [31,32,33]. The ED and ELI were calculated by an own separate code using the output of the FHI-aims method [34]. Topological analysis of the ED and the ELI using the quantum theory of atoms in molecules (QTAIM) [35] was realized by the program DGrid [36]. Determination of which atoms are contributing to a particular bond is done by intersecting the associated ELI bond basin and the atom basins [37].

X-ray diffraction data evidence a pressure-induced phase transition of BiI3 into the denser PuBr3-type crystal structure around 4.6 GPa. Optical absorbance measurements show that the structural change is associated with a decrease of the band gap. Within the stability field of the high-pressure form, the decrease proceeds and extrapolation of data measured up to 18 GPa predict a metallization at around 35 GPa, in good agreement with the calculated band gaps determined by fully relativistic density functional calculations. Chemical bonding in both low- and high-pressure form is essentially ionic with small covalent contributions in the Bi–I interactions.

The following are available online at https://www.mdpi.com/2304-6740/7/12/143/s1, CIF, and the checkCIF output files. CCDC 1969518–1969543 contain the supplementary crystallographic data for this paper. These data can be obtained free of charge from The Cambridge Crystallographic Data Centre via www.ccdc.cam.ac.uk/data_request/cif.

This research was supported by a beam time grants of the European Synchrotron Radiation Facility (ESRF, Grenoble) under proposal numbers hs2739 and hs3112.

The authors thank Stefano Leoni and S. E. Boulfelfel for discussions on chemical bonding. Support of Carola J. Müller and Miriam Schmidt for the synchrotron experiments is gratefully acknowledged. Thorough discussions with Michael Ruck and Luis Elcoro are appreciated. 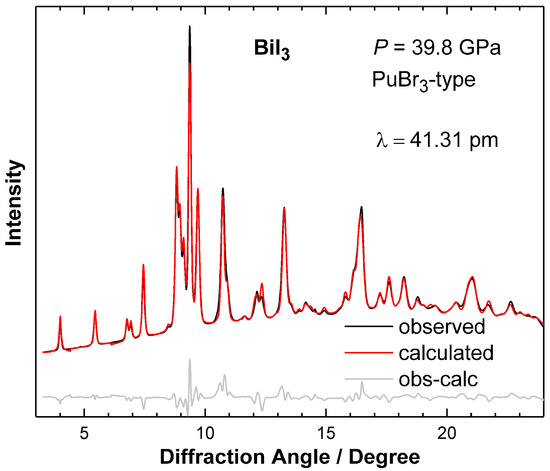 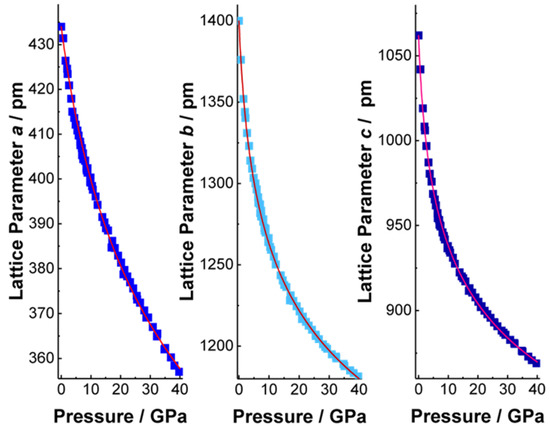 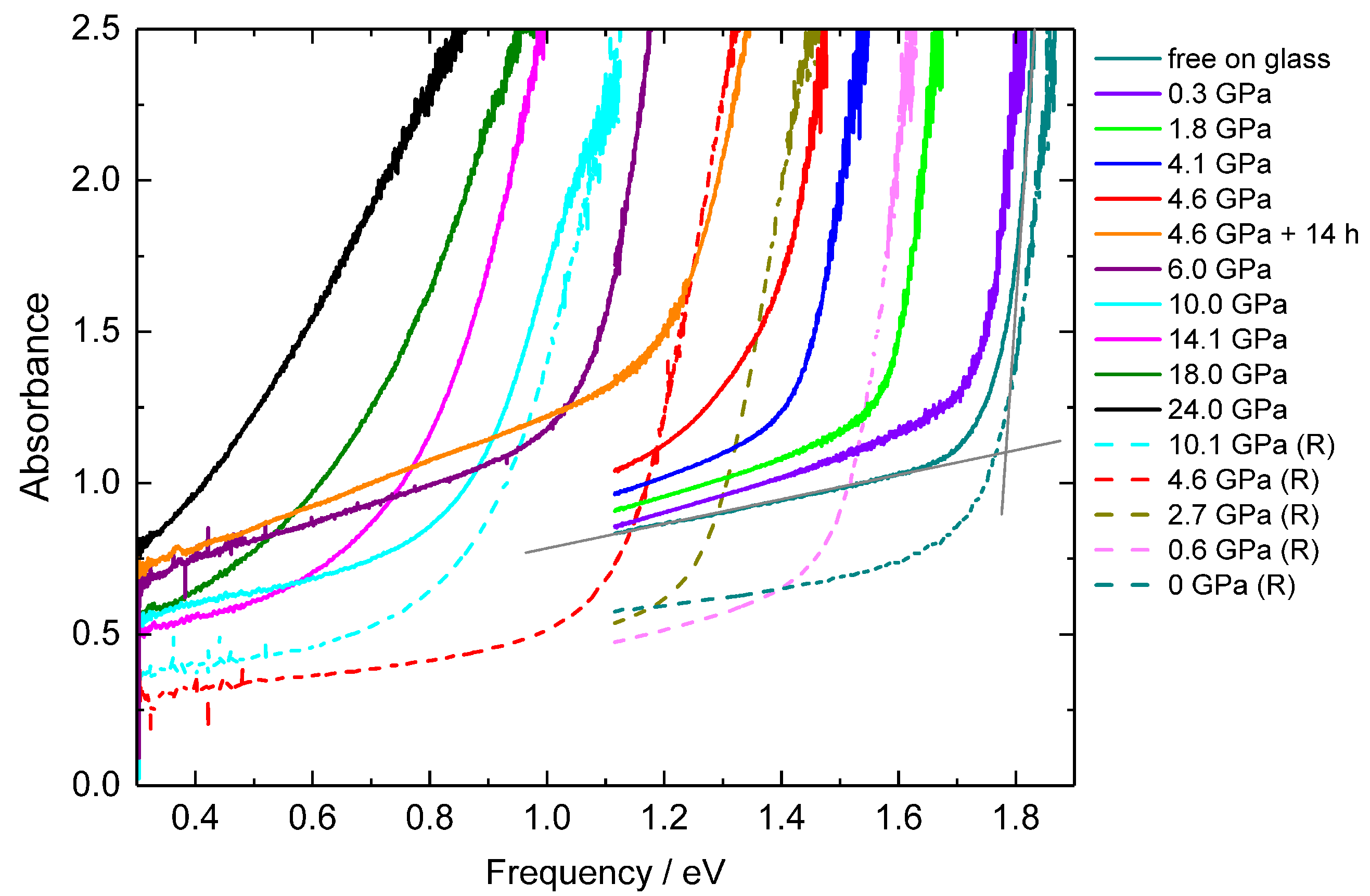 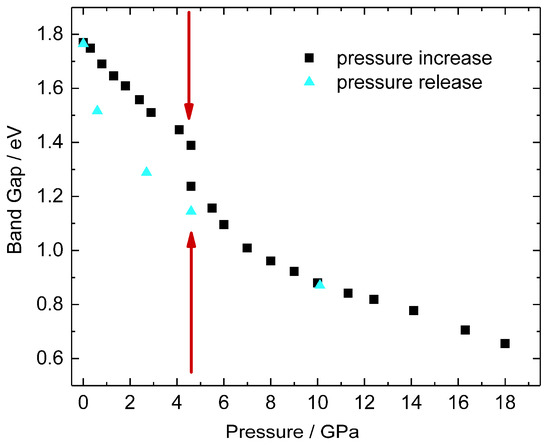 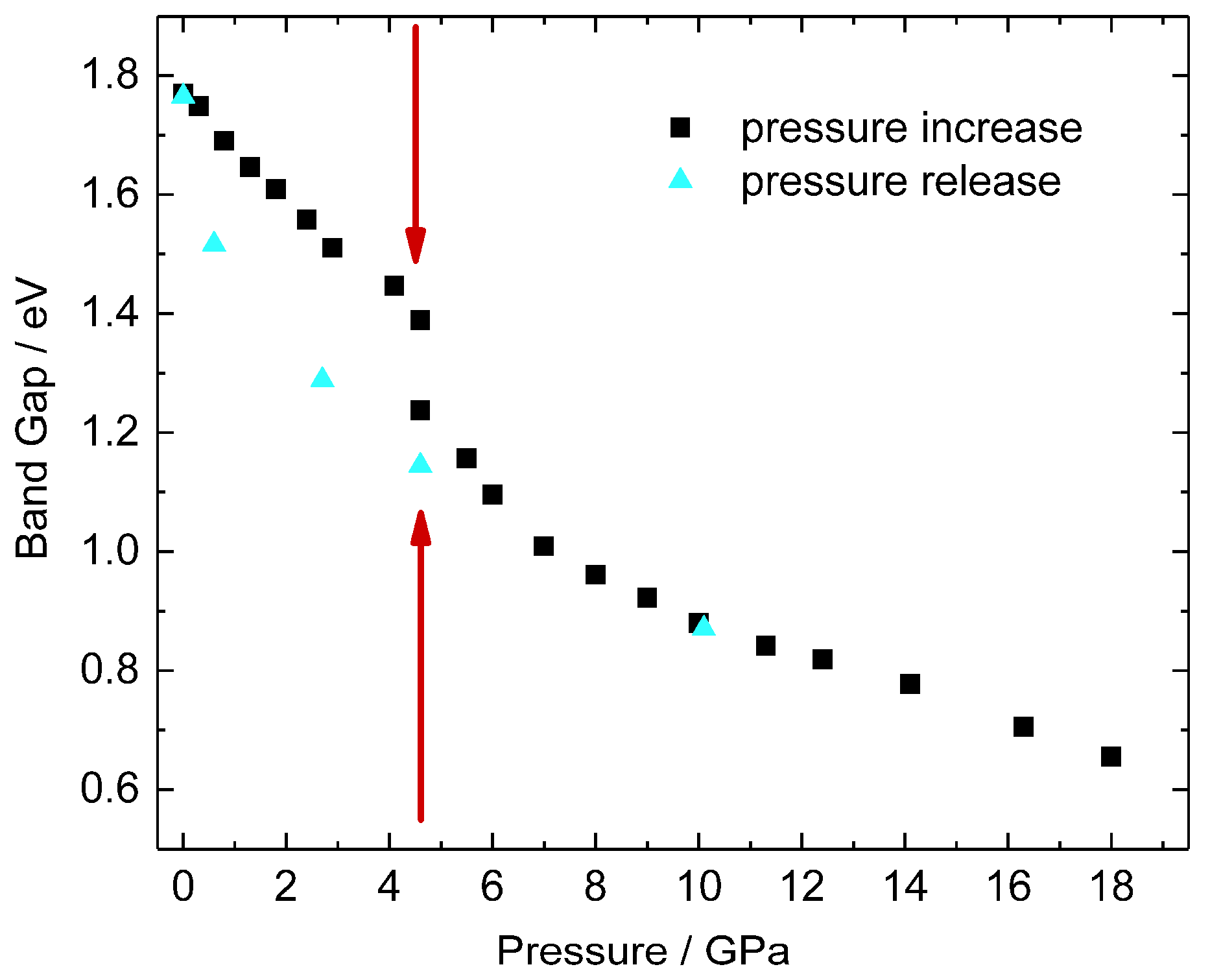 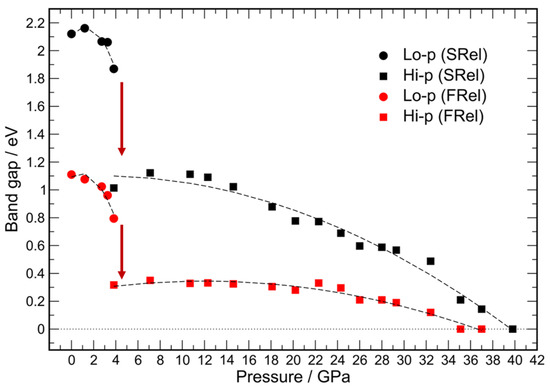 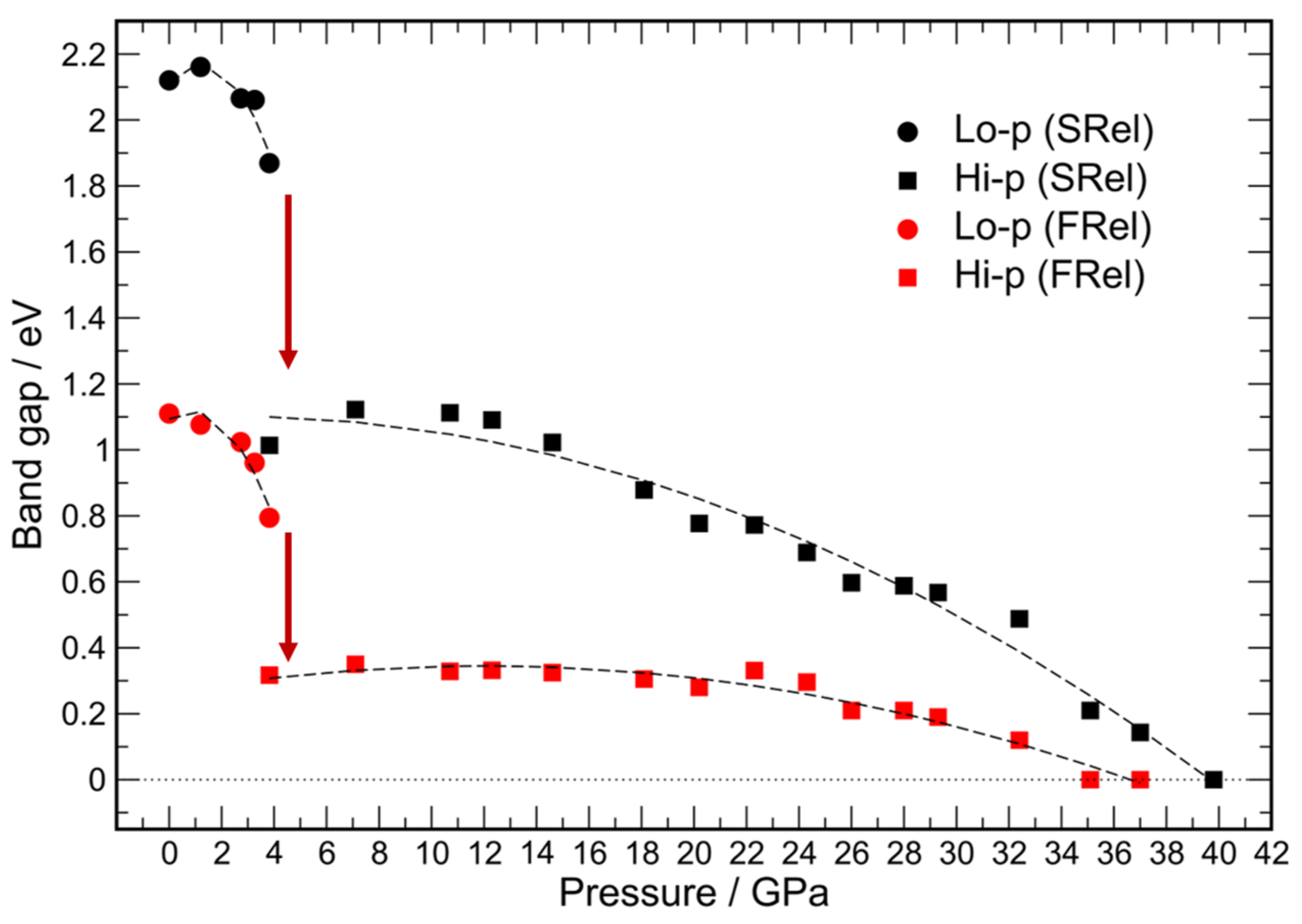 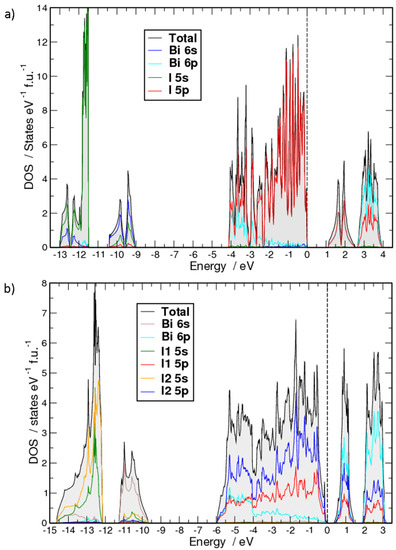 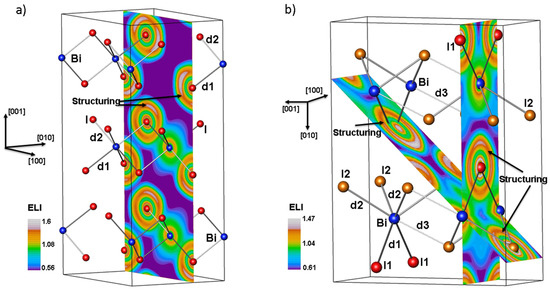