This work reports and describes a novel alkali-activated metakaolin as a potential binder material for the granulation of zeolites, which are widely used as CO2 adsorbents. The alkali-activated binders are zeolite-like materials, resulting in good material compatibility with zeolite-based adsorbents. A major problem during the granulation of zeolites is that their adsorption capacities decrease by about 15–20%, because typical binder materials (for example bentonite or kaolin clay) are inactive towards CO2 adsorption. A possible pathway to solve this problem is to introduce a novel binder that is also able to sorb CO2. In such a case, a binder plays a dual role, acting both as a binding material and as a sorbent. However, it is important that, alongside the adsorptive properties, a novel binder material must fulfil mechanical and morphological requirements. Thus, in this work, physical and mechanical properties of this novel binder for zeolite granulation for CO2 adsorption are studied. Alkali-activated metakaolin was found to be efficient and competitive as a binder material, when mechanical and physical properties were concerned. The compressive strengths of most of the obtained binders reported in this work are above the compressive strength threshold of 10 MPa. The future work on this novel binder will be conducted, which includes granulation-related details and the CO2 adsorptive properties of the novel binder material. Metakaolin was used as a precursor for alkali-activated binders. Binders were synthesized using varying molarity of a NaOH solution and at varying curing conditions. The final products were characterized using density measurements, compressive strength tests, X-ray diffraction (XRD), Fourier-transform infrared spectroscopy (FTIR), Brunauer–Emmett–Teller (BET) analysis, and scanning electron microscopy (SEM). View Full-Text
Keywords: alkali-activated binder; metakaolin; zeolites; CO2 adsorbents; carbon dioxide; material characterization alkali-activated binder; metakaolin; zeolites; CO2 adsorbents; carbon dioxide; material characterization
►▼ Show Figures 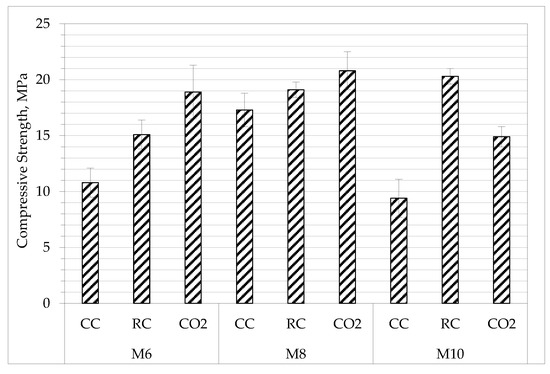