Continuous Production of IF-WS2 Nanoparticles by a Rotary Process

The adsorption of glycine (Gly) both in gas-phase conditions and in a microsolvated state on a series of zig-zag (n,0) single-walled boron nitride nanotubes (BNNTs, n = 4, 6, 9 and 15) has been studied by means of B3LYP-D2* periodic calculations. Gas-phase Gly is found to be chemisorbed on the (4,0), (6,0) and (9,0) BNNTs by means of a dative interaction between the NH2 group of Gly and a B atom of the BNNTs, whose computed adsorption energies are gradually decreased by increasing the tube radius. On the (15,0) BNNT, Gly is found to be physisorbed with an adsorption driving force mainly dictated by p-stacking dispersion interactions. Gly adsorption in a microsolvated environment has been studied in the presence of seven water molecules by progressively microsolvating the dry Gly/BNNT interface. The most stable structures on the (6,0), (9,0) and (15,0) BNNTs present the Gly/BNNT interface fully bridged by the water solvent molecules; i.e., no direct contact between Gly and the BNNTs takes place, whereas on the (4,0) BNNT the most stable structure presents a unique direct interaction between the COO− Gly group and a B atom of the nanotube. Further energetic analyses indicate that the (6,0), (9,0) and (15,0) BNNTs exhibit a low water affinity, which favors the Gly/water interactions upon BNNT coadsorption. In contrast, the (4,0) BNNT has been found to show a large water affinity, bringing the replacement of adsorbed water by a microsolvated glycine molecule as an unfavorable process. View Full-Text
Keywords: DFT; periodic simulations; biomolecules; boron nitrides; adsorption; microsolvation DFT; periodic simulations; biomolecules; boron nitrides; adsorption; microsolvation
►▼ Show Figures 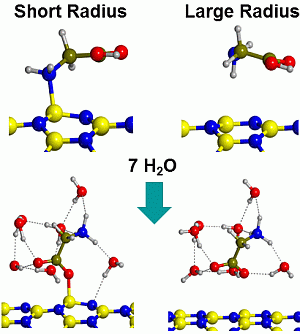