:
The interferometric acquisition of the transmission matrix (TM) of a multimode optical fibre (MMF), which is at the heart of multimode fibre-based endoscopic imaging methods, requires using a reference beam. Attempts to use an internal reference, that is to provide the reference in a common pathway geometry through the MMF itself, lead to a speckled reference intensity and consequential occurrence of “blind spots”—locations where insufficient optical power in the reference wave inflicts strong measurement errors. Here we show that combining a relatively small number of TMs, which are measured using different internal references, facilitates a complete elimination of blind spots, and thereby a significant enhancement of the imaging quality.
Keywords:
fibre endoscopy; spatial light modulator; transmission matrix

In the proposed experimental technique, we used a Cartesian array of non-overlapping focal spots as the input mode basis and a sensor array (CCD) in the image plane as the output modes of the system. The input modes were addressed individually by displaying the appropriate hologram on a phase-only SLM. We treat the light field complex until synthesising the hologram accordingly to [16], so both phases and intensities of the input modes are addressed this way. The output mode intensities were acquired simultaneously with a digital CCD camera. A randomly chosen input mode was used as an internal reference wave for the calibration procedure. The measured input mode was addressed and phase shifted on the SLM in a range of with steps and the intensity on every camera pixels was recorded to calculate the amplitude and obtain the phase difference between the probe and reference modes [15]. In principle, three phase shifts suffice to recover the phase offset of a particular mode. Yet, in our experience, using two periods with four steps, i.e., eight steps total, is better than signal averaging and yields a reduction in measurement noise [19].
We observed that the resulting output mode intensity homogeneity is enhanced when information from all the single-reference TMs is added together and weighted by the amplitude . To find the phase difference between the references, r, and for the j-th output mode, , we calculate a dot product of j-th TM columns:
The resulting output mode vector is then given by a sum: where R is the number of internal references. Combining each single reference TM of every output mode in this manner results in the final TM with suppressed blind spot areas, as demonstrated in Figure 2.
The experimental apparatus was built with a near-infrared fibre laser, IPG YLM-10-LP-SC, emitting a linearly polarised light beam with a wavelength of nm. The output beam is expanded using achromatic doublet lenses to fully cover the phase grating created on the SLM (HSP1064-512-PCIe, Meadowlark Optics, Frederick, CO, USA). The SLM is based on liquid crystals and imparts a phase shift on the reflected beam in the range of 0–2, higher phase shifts must be therefore wrapped in this interval. Switching between phase holograms is possible at a maximum refresh rate of 100 Hz. The zeroth and higher orders of diffracted light are filtered out with an iris aperture. The linear polarisation of the laser beam is changed to circular with a plate. The phase mask, shifted to the first diffraction order, is imaged onto the back focal plane of a microscope objective (PlanCN 10/0.25, Olympus, Tokyo, Japan) and projected on the input facet of the MMF (Thorlabs FG050LGA, NA 0.22, diameter 50 µm). The pattern on the output fibre facet is imaged using an identical microscope objective and tube lens to a fast CMOS camera (acA640-120uc, Basler, Ahrensburg, Germany) through another plate to change the polarisation back to linear.
The FG050LGA MMF has approximately 260 propagating modes in each orthogonal polarisation state involved in image transmission. A total of 525 input modes were projected on the proximal end of the fibre and approximately 15,000 output modes were analysed on the detector side of the set up. The number of input modes is higher than the number of guided modes, the measurement configuration is therefore oversampled and fully describes the transmission of the system.
The results of this approach strongly depend on the number and position of the internal references. To visualise this dependence, all output modes were addressed successively and their intensity was acquired with the respective pixels on the CMOS chip calibrated for a linear response. The recorded values were put together in one image and uniformity was expressed using the interference contrast formula:

In conclusion, using internal, rather than external, references to calibrate a MMF endoscope leads to a more compact apparatus that require fewer optical elements and, consequentially, a higher stability of the experimental system. Furthermore, the sensitivity to phase fluctuations is reduced since the reference and signal beams have a common optical path. The trade-off for this stability is the necessity for multiple calibration steps using different references, in order to overcome the blind-spots caused by the speckled nature of the internal reference, resulting in an increase of the calibration time. We, however, show that with an optimised choice of reference, only 2–3 references are required to obtain a transmission matrix, resulting in a high image quality.

The raw data (measured intensities and images) are available on http://www.isibrno.cz/~jakl/FiberInternalReferences (accessed on 1 December 2021).

The electron lithography sample was prepared by a team of Electron Beam Lithography from a group of New Technologies at the Institute of Scientific Instruments of the Czech Academy of Sciences in Brno. 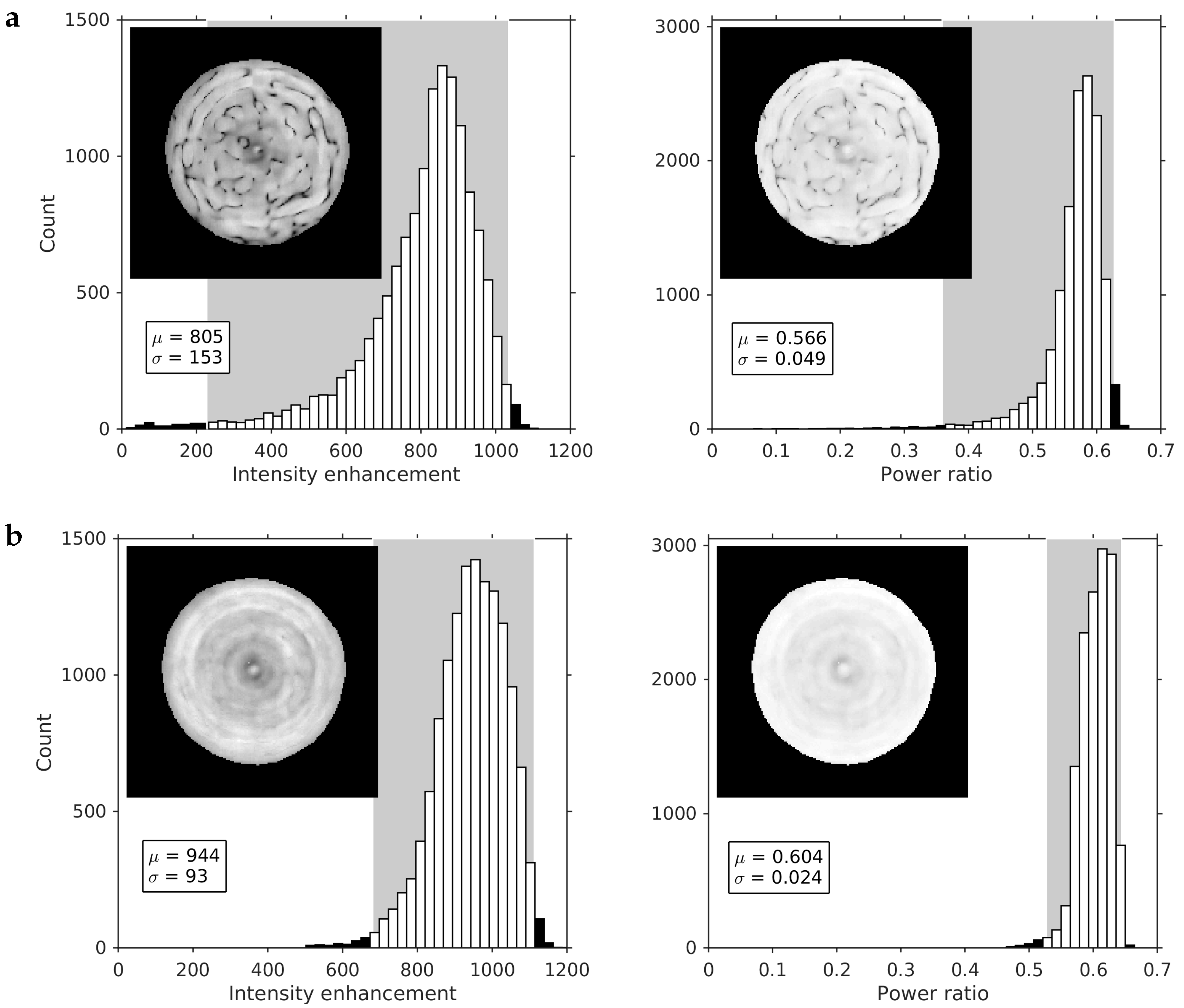 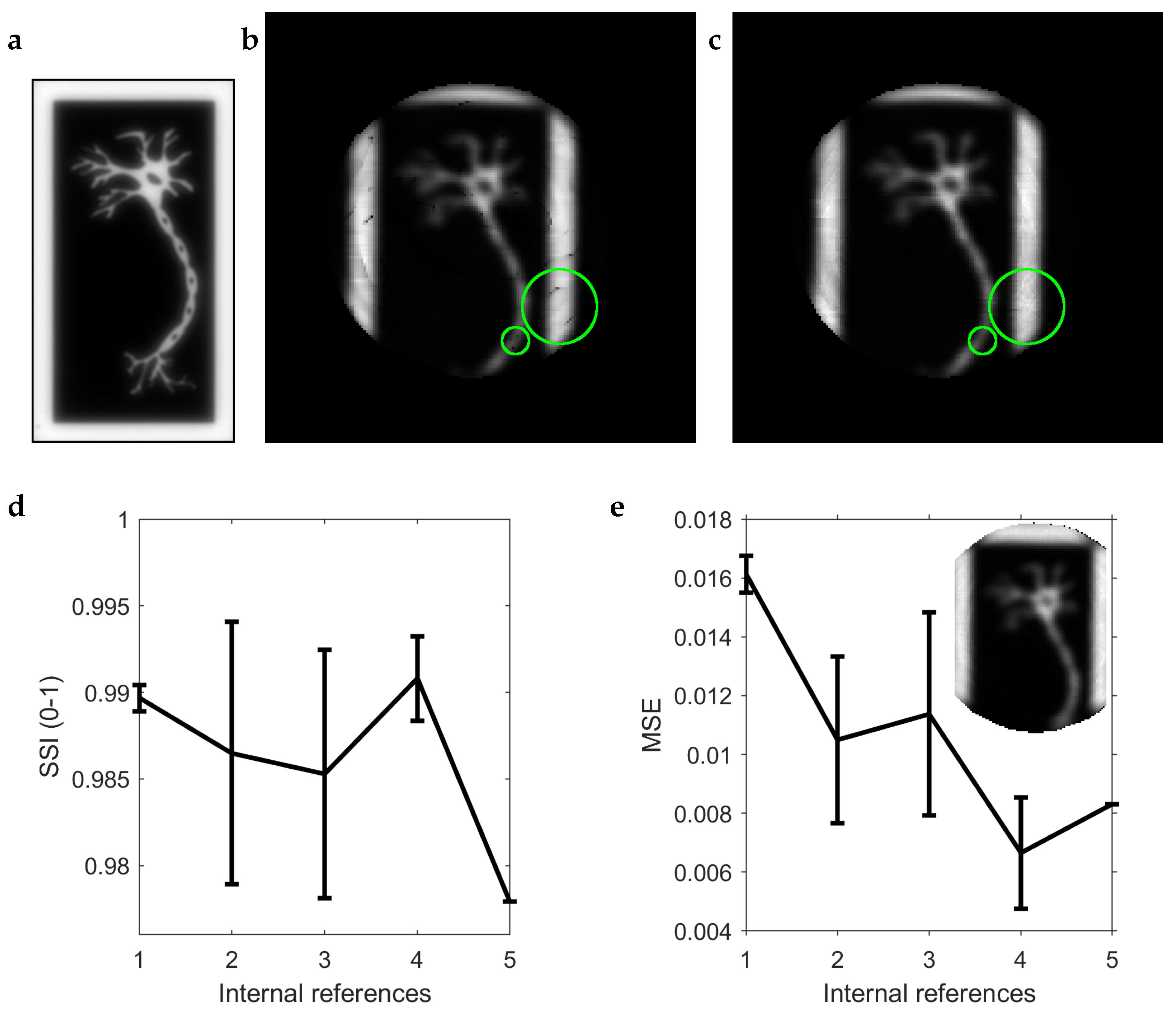