Nadarajah–Haghighi Lomax Distribution and Its Applications

Evaporation calculations are important for the proper management of hydrological resources, such as reservoirs, lakes, and rivers. Data-driven approaches, such as adaptive neuro fuzzy inference, are getting popular in many hydrological fields. This paper investigates the effective implementation of artificial intelligence on the prediction of evaporation for agricultural area. In particular, it presents the adaptive neuro fuzzy inference system (ANFIS) and hybridization of ANFIS with three optimizers, which include the genetic algorithm (GA), firefly algorithm (FFA), and particle swarm optimizer (PSO). Six different measured weather variables are taken for the proposed modelling approach, including the maximum, minimum, and average air temperature, sunshine hours, wind speed, and relative humidity of a given location. Models are separately calibrated with a total of 86 data points over an eight-year period, from 2010 to 2017, at the specified station, located in Arizona, United States of America. Farming lands and humid climates are the reason for choosing this location. Ten statistical indices are calculated to find the best fit model. Comparisons shows that ANFIS and ANFIS–PSO are slightly better than ANFIS–FFA and ANFIS–GA. Though the hybrid ANFIS–PSO ( 0.99, VAF = 98.85, RMSE = 9.73, SI = 0.05) is very close to the ANFIS ( = 0.99, VAF = 99.04, RMSE = 8.92, SI = 0.05) model, preference can be given to ANFIS, due to its simplicity and easy operation. View Full-Text
Keywords: evaporation; adaptive neuro fuzzy system; firefly algorithm; particle swarm optimization; genetic algorithm; statistical indices evaporation; adaptive neuro fuzzy system; firefly algorithm; particle swarm optimization; genetic algorithm; statistical indices
►▼ Show Figures 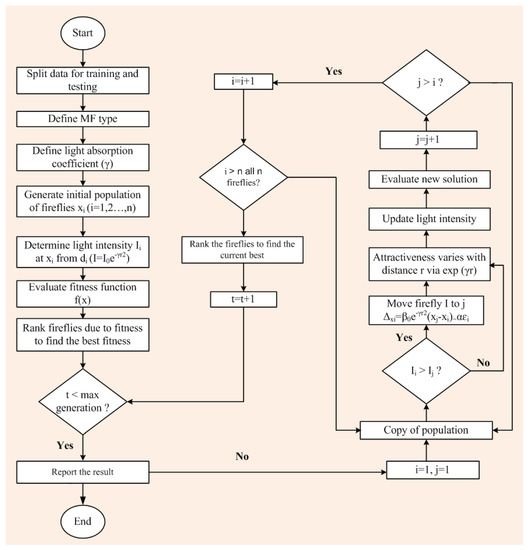