In the countercurrent chromatography and centrifugal partition chromatography, separation method transfer and scale-up is often described as an easy and straightforward procedure. Separation methods are usually developed on lab scale columns and subsequently transferred using linear scale-up factors to semi-preparative or preparative columns of the same column design. However, the separation methods described in the literature have been developed on various columns of different design and size. This is accompanied by differences in the separation behavior of the columns and therefore makes separation method transfer difficult. In the current study, the separation performances of different columns were evaluated and compared. Linear correlations of stationary phase retention and column efficiency as a function of flow rate were found to be applicable for the calculation of separation resolution in the typical operating range of each column. In this context, a two-point short-cut approach for a fast column characterization is recommended. This allows a quick prediction of the separation method transferability between columns, which saves experimental time and effort. In the current study, the transferability between five different columns from lab scale countercurrent chromatography (CCC) (18 mL) to semi-preparative centrifugal partition chromatography (CPCs) (250 mL) with different cell numbers and design is investigated. View Full-Text
Keywords: column characterization; resolution; separation performance; inter-apparatus method transfer column characterization; resolution; separation performance; inter-apparatus method transfer
►▼ Show Figures 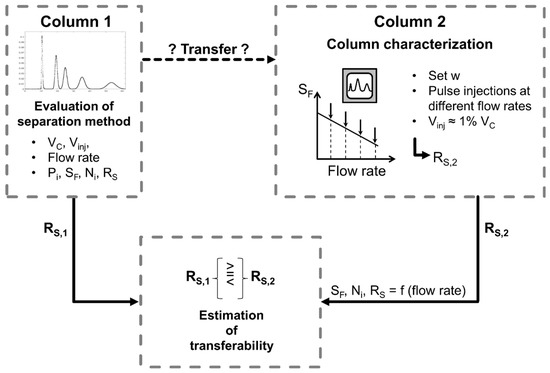