On Fluid Flow Field Visualization in a Staggered Cavity: A Numerical Result
Previous Article in Journal

Article
Ameliorative Effect of Heat-Killed Lactobacillus plantarum L.137 and/or Aloe vera against Colitis in Mice
by

:
Inflammatory bowel disease (IBD) is one of the predominant intestinal diseases associated with chronic inflammation and ulceration of the colon. This study explored the ameliorative effect of Aloe vera extract (Aloe) and/or heat-killed Lactobacillus plantarum L.137 (HK L.137) on dextran sodium sulfate (DSS)-induced colitis in mice. Aloe and/or HK L.137 were supplied for 9 days and the mice were challenged with DSS for 7 days. The DSS group demonstrated bloody diarrhea, colitis of high histologic grade, increased nuclear factor-kappa B (NF-κB) p65, inducible nitric oxide synthase (iNOS), myeloperoxidase (MPO), interleukin (IL)-6, and tumor necrosis factor (TNF)-α, and decreased IL-10 expression. These alterations were dwindled in DSS-induced mice treated with Aloe and HK L.137 separately. Aloe and HK L.137 together have augmented the therapeutic effect of each other. In conclusion, our findings demonstrated that Aloe and/or HK L.137 ameliorated DSS-induced colitis by promoting the secretion of anti-inflammatory cytokines and suppressing pro-inflammatory mediators. This study indicated that A. vera may function synergistically with HK L.137 to confer an effective strategy to prevent colitis.
Keywords:
ulcerative colitis; Aloe; HK L.137; DSS; cytokines

Inflammatory bowel disease (IBD) is a chronic immune-mediated disease characterized by inflammation and ulceration of mucosal and submucosal layers of the colon. So far, the etiology of the disease is not precisely known; however, several different genetic and environmental factors might be involved [1]. IBDs include two basic types, namely Crohn’s disease (CD) and ulcerative colitis (UC). The disease is manifested by chronic diarrhea, rectal bleeding, and abdominal cramps [2]. A vast number of inflammatory mediators were implicated in the pathogenesis of the disease. Therefore, most medications formulated for the treatment and/or management of the IBD depend mainly on the anti-inflammatory/immunosuppressive actions [3]. Unfortunately, the treatment is mostly not effective in some instances and accompanied mainly by frequent relapsing and progressive nature. Therefore, surgical interference and resection of parts of the digestive system are necessary for 20%–50% of IBD patients [4]. The mechanism of the inflammatory response of IBD is mostly associated with activation of inflammatory cells, such as macrophages, dendritic cells, neutrophils, and different subsets of T lymphocytes [5]. These cells were accompanied with massive production of reactive nitrogen species (RNS) and reactive oxygen species (ROS) and several inflammatory mediators, such as tumor necrosis factor-alpha (TNF-α), interleukin (IL)-6, IL-17, IL-21, and cyclooxygenases (COX-1 and COX-2). These cytokines were mostly associated with increased epithelial permeability, mucosal injury, and subsequent invasion of commensal bacteria into the sub-epithelial space [6].
Dextran sodium sulfate (DSS) is a sulfated polysaccharide that has been reported to induce colitis for the first time in hamsters [7]. Although not fully understood, the mechanism of DSS-induced colitis is related to direct injury of the crypt epithelium and crossing of intestinal contents, particularly the commensal bacteria and/or their products, leading to inflammation [8,9]. Besides, the histopathological findings have closely resembled that of human UC [10]. Therefore, the DSS-induced colitis has been permitted as a valuable model for evaluating the potential of agents of interest as therapeutics for IBD [11].
Probiotics are non-pathogenic microorganisms supplemented to promote the intestinal microbial balance [12]. They include Saccharomyces boulardii and lactic acid-producing bacteria, such as Bifidobacterium and Lactobacillus spp. Lactobacillus species are Gram-positive bacteria playing a central role in food fermentation and offer a plausible model to explore the molecular effects of food-associated bacteria in human mucosa. The health-promoting effects of probiotics in IBD have been acknowledged and Escherichia coli Nissle 1917 has been approved for the treatment of UC [13]. Lactobacillus paracasei reduced circulating pro-inflammatory cytokines in UC [14]. Lactobacillus rhamnosus has a prophylactic activity on colorectal carcinogenesis by inducing apoptosis and ameliorating inflammation, thereby represent promising candidates as a bio-therapeutic dietary agent [15]. Interestingly, altered gastrointestinal microbiota may participate completely or in part in the mucosal immune response [16]. Therefore, the intestinal mucosal barrier in IBD may allow bacterial access to the submucosal tissues, thereby enhancing the inflammatory response. Thus, probiotic therapy depends upon altering the bacterial composition that strengthens the immune status and competes for the inflammation. The premise of dysbiosis is therefore considered the rationale for administering live beneficial bacterial strains for IBD [17].
Aloe vera (Aloe barbadensis Mill) possesses many beneficial biological effects, including anti-inflammatory, antioxidant, immunostimulant, antidiabetic, and antitumor activities [18,19]. It originates mostly within the dry areas of Southern Europe, Africa, Asia, and the Mediterranean region [20]. Dietary supplementation of Aloe components such as aloesin has shown a beneficial role in the treatment of colitis in rats [21]. A. vera gel has been shown to prevent azoxymethane/DSS-induced colon carcinogenesis by inhibiting chronic inflammation as well as cell cycle progression [22]. In a rodent model of colitis, dietary supplementation of A. vera gel ameliorated intestinal inflammation [21]. Given its anti-inflammatory potential, the current study scrutinized the preventive effect of A. vera and/or HK L.137 on DSS-induced acute colitis in mice. Although A. vera and Lactobacillus plantarum have shown multiple pharmacological effects, this is the first study assessing their ameliorative effect on clinical signs, histopathological changes, and tissue cytokines in DSS-induced colitis in mice.

DSS (M.W. 36–50 KD) was supplied by MP Biomedicals (Solon, OH, USA), and HK L.137 was supplied by the House Wellness Foods Corporation (Hyogo, Japan). Lyophilized A. vera powder was obtained from Coral Vegetable (Miyakojima, Japan). All other chemicals and kits were purchased from standard commercial sources.

The present study was carried out using 7-week old male Balb/c mice (25.32 ± 3.25 g) obtained from the Laboratory Animal Center of Theodor Bilharz Research Institute (Cairo, Egypt). The animals were divided randomly into eight groups of six mice each and housed in polypropylene cages. All mice were maintained at 25 °C under 12 h light-dark cycle with free access to water and food (Teklad global 18% protein rodent diet, Harlan Laboratories, Livermore, CA). Mice were acclimatized for 1 week before the experiment. All procedures were approved by the Institutional Animal Care and Use Committee at the Faculty of Science, Kafrelsheikh University (Ethical approval number, KFS-2016/10).

Treatment with Aloe and/or HK L.137 was started 2 days before DSS administration and continued for 7 days with DSS. 5% (w/v) DSS solution in drinking water was administered to the animals for 3 days, followed by a 3% (w/v) DSS for 4 days [23].
Forty-eight mice were randomized into eight groups as follows (Figure 1):

The mice were euthanized 24 h after the last administration of Aloe and/or HK L137 and samples were collected for analyses.

Food intake and water consumption were recorded throughout the experiment (Supplementary Figure S1). Disease activity index (DAI) was determined according to stool consistency, rectal bleeding, diarrhea, and body weight loss. Each parameter was given a score according to the previously proposed criteria [26] and used in calculating an average daily DAI.

Following sacrifice, the colon was excised up to cecum, the length was determined and then emptied with PBS. Samples were divided into two portions; one preserved in formalin and the other was kept at −80 °C. For histopathology, samples from the colon were fixed in 10% neutral buffered formalin. The samples were processed for paraffin embedding, and then 5-µm sections were cut and stained with hematoxylin and eosin (H&E).

The histological alterations were assessed blindly following a previously validated intestinal histologic inflammatory score [27] where the infiltration of neutrophils and eosinophils in the lamina propria and crypt degeneration were monitored (Table 1).

Paraffin sections were cleared in xylene, rehydrated in descending grade of ethanol, immersed in distal water, and then an antigen retrieval (EDTA solution, pH 8) was carried out. The slides were incubated in 0.3% hydrogen peroxide and blocked for 2 h in 5% bovine serum albumin in Tris-buffered saline (TBS). The sections were immunostained with rabbit anti-NF-κB p65 (RB1638P0, Thermo Fisher Scientific, Waltham, MA, USA; 1:100 dilution) anti-iNOS polyclonal primary antibodies (PA1-036, Invitrogen, USA; 1:20 dilution) overnight at 4 °C. After washing with PBS, the sections were incubated with secondary antibody (anti-rabbit IgG, EnVision + System HRP; Dako) for 30 min at room temperature, washed and incubated for 2 min in diaminobenzidine (DAB; Dako). Counterstaining was performed using hematoxylin stain, and the slides were visualized under a light microscope (Leica, supplied with DFC Leica digital camera). Quantitative analysis of NF-κB p65 and iNOS immunostaining was carried out using ImageJ (version 1.32j, NIH, USA) and expressed as percent of control.

2.8. Determination of Myeloperoxidase (MPO) and Cytokines

A total of 100 mg of the whole colon tissue was weighed, homogenized in 1000 µL EDTA-PBS, and centrifuged for 5 min at 4 °C (1000× g). The protein content in the supernatant was measured using a NanoDrop. MPO activity and the cytokines (TNF-α, IL-6, and IL-10) were assayed in the homogenate using ELISA kits supplied by Kamiya Biomedical Company (Tukwila, WA, USA) and RayBiotech (Peachtree Corners, GA, USA), respectively, following the provided instructions.

Mice received DSS showed an increase in DAI (diarrhea, stool consistency, bleeding, and body weight loss) when compared with the control group (p < 0.001). DSS-induced mice treated either with Aloe or HK L.137 showed significantly reduced colitis degree (p < 0.01), and the combined therapy effectively decreased the severity of colitis when compared with Aloe or HK L.137 (p < 0.001), as represented in Figure 2A.
Mice received DSS exhibited a significant decrease in the colon length (p < 0.001; Figure 2B), an effect that was reversed in the mice received Aloe and/or HK L.1.37. Of note, oral administration of Aloe and/or HK L.137 did not affect the colon length in normal mice (Figure 2B).

H&E-stained sections from the colon of control (Figure 3A) and Aloe and HK L.137-treated mice (Figure 3B) showed normal mucosa consisted of perpendicular crypts. In contrast, the DSS-induced group revealed severe colitis associated with extensive necrosis of the crypts extended along the whole mucosa to the lamina propria and the muscle layer. The other inflammatory lesions, such as hemorrhage, edema, and neutrophilic infiltration were obviously seen in this group (Figure 3C). DSS-induced animals treated with Aloe (Figure 3D) or HK L.137 (Figure 3E) revealed a decrease in the colitis degree that appeared within the last third of the mucosal surface, whereas the combined treatment improved the intestinal mucosa with apparent mucosal covering (Figure 3F).
The quantitative histological grades of each segment indicated a decrease in G0 percentage (normal tissue grade). The DSS group showed low levels of G0 with markedly increased G3 and G4 inflammation score. DSS-induced animals treated with Aloe and/or HK L.137 demonstrated marked increase in the G0 and G1 score and decreased percentage of G3 and G4 (Table 2).

3.3. Aloe and/or HK L.137 Suppress NF-κB and iNOS Expression in the Colon of DSS-Induced Mice

This investigation introduces new information on the ameliorative effect of HK L.137, alone and in combination with A. vera, on DSS-induced colitis. Aloe, HK L.137, and their combination conferred protection against experimental colitis in mice. Aloe and/or HK L.137 prevented histological alterations and neutrophils infiltration, suppressed iNOS, MPO, and pro-inflammatory cytokines, and enhanced IL-10 in the colon of mice. These findings pointed to the role of neutrophils in DSS-induced colitis and the ameliorative effect of Aloe and/or HK L.137 that was mediated via their dual antioxidant and anti-inflammatory efficacy. Therefore, the combination of Aloe vera with probiotics would represent a promising candidate for the prevention/treatment of IBDs, pending further investigations to explore their exact mechanisms of action.

This research was supported by the Deanship of Scientific Research at Princess Nourah bint Abdulrahman University through the Fast-track Research Funding Program.

The authors would like to thank Mahmoud Dawood (Faculty of Agriculture, Kafrelsheikh University, Egypt) and Ayman Atiba (Faculty of Veterinary Medicine, Kafrelsheikh University, Egypt) for providing resources during the execution of this work. The authors acknowledge the Deanship of Scientific Research at Princess Nourah bint Abdulrahman University for funding this research through the Fast-track Research Funding Program. 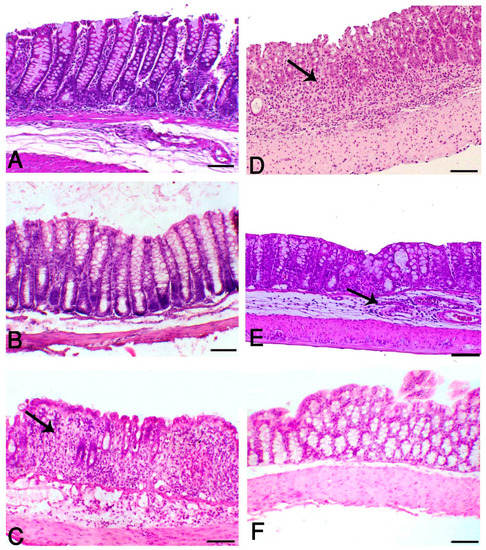 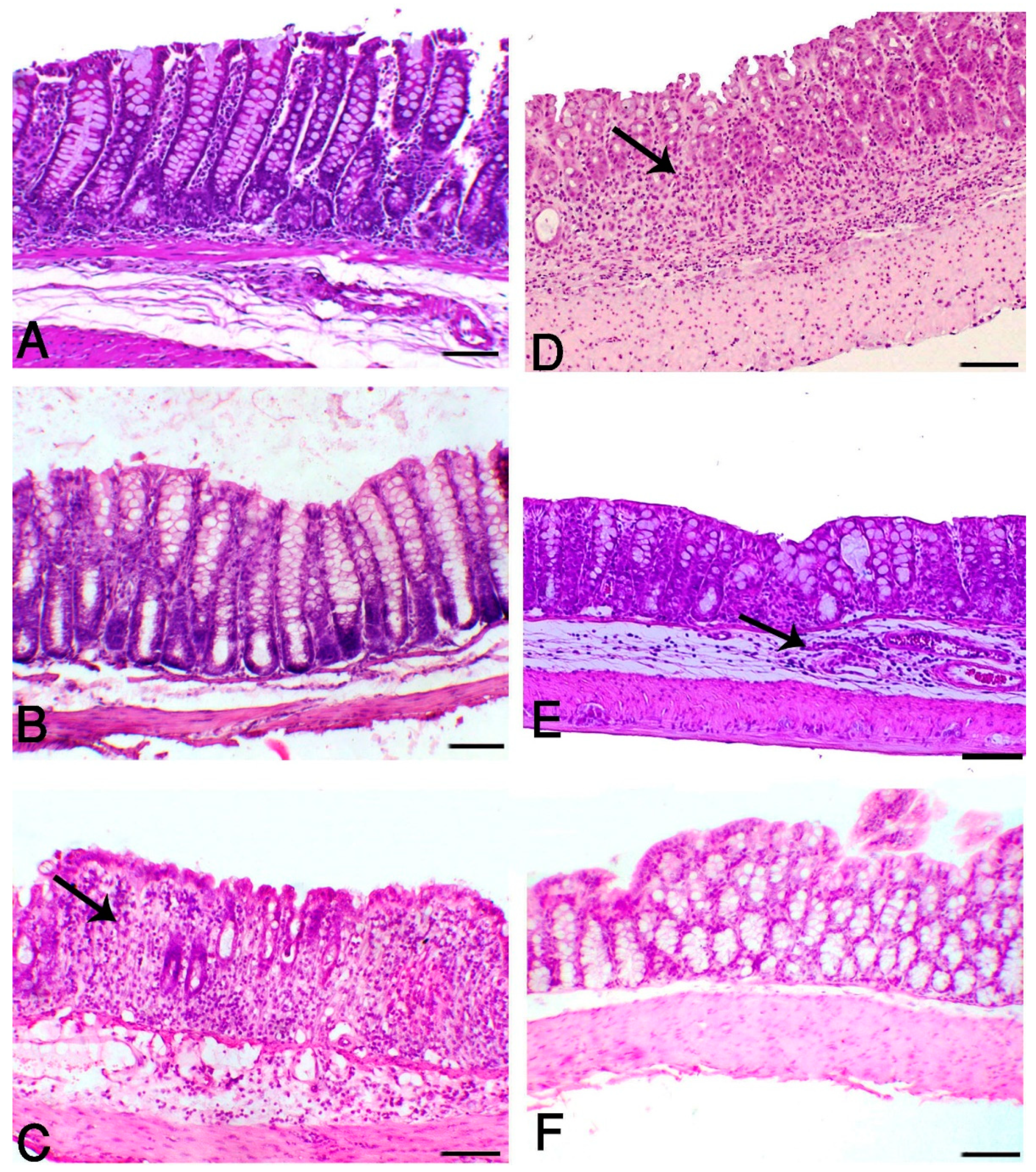 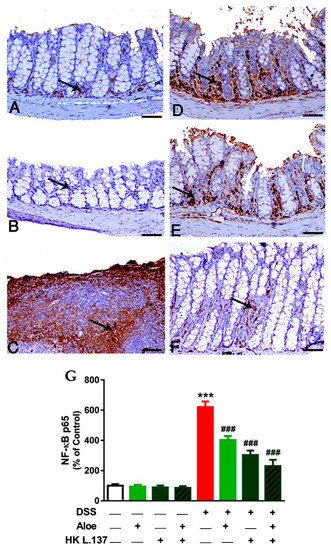 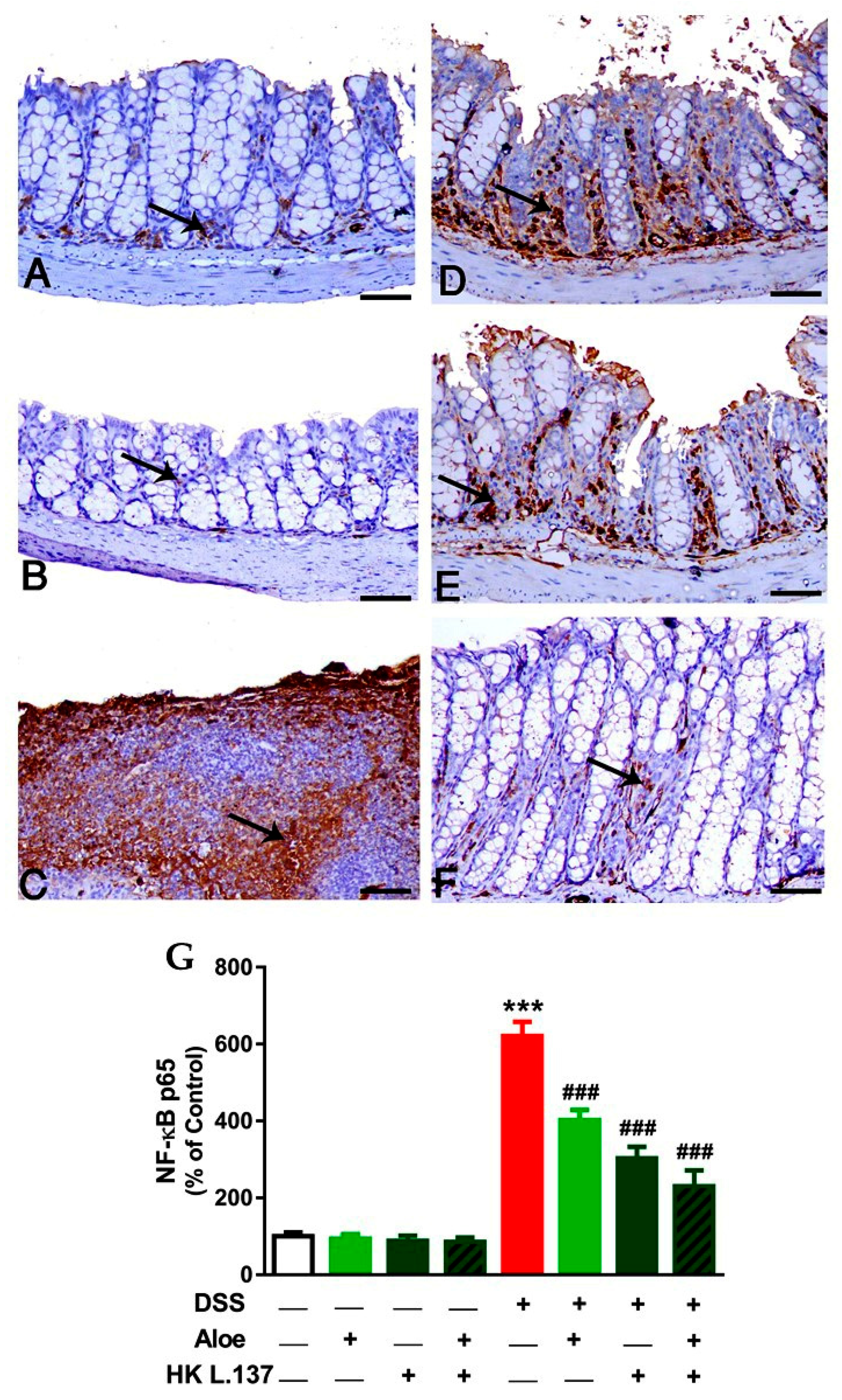 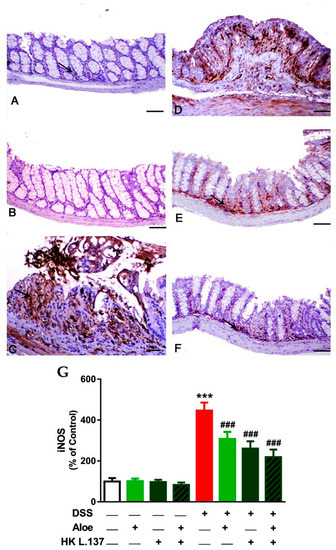 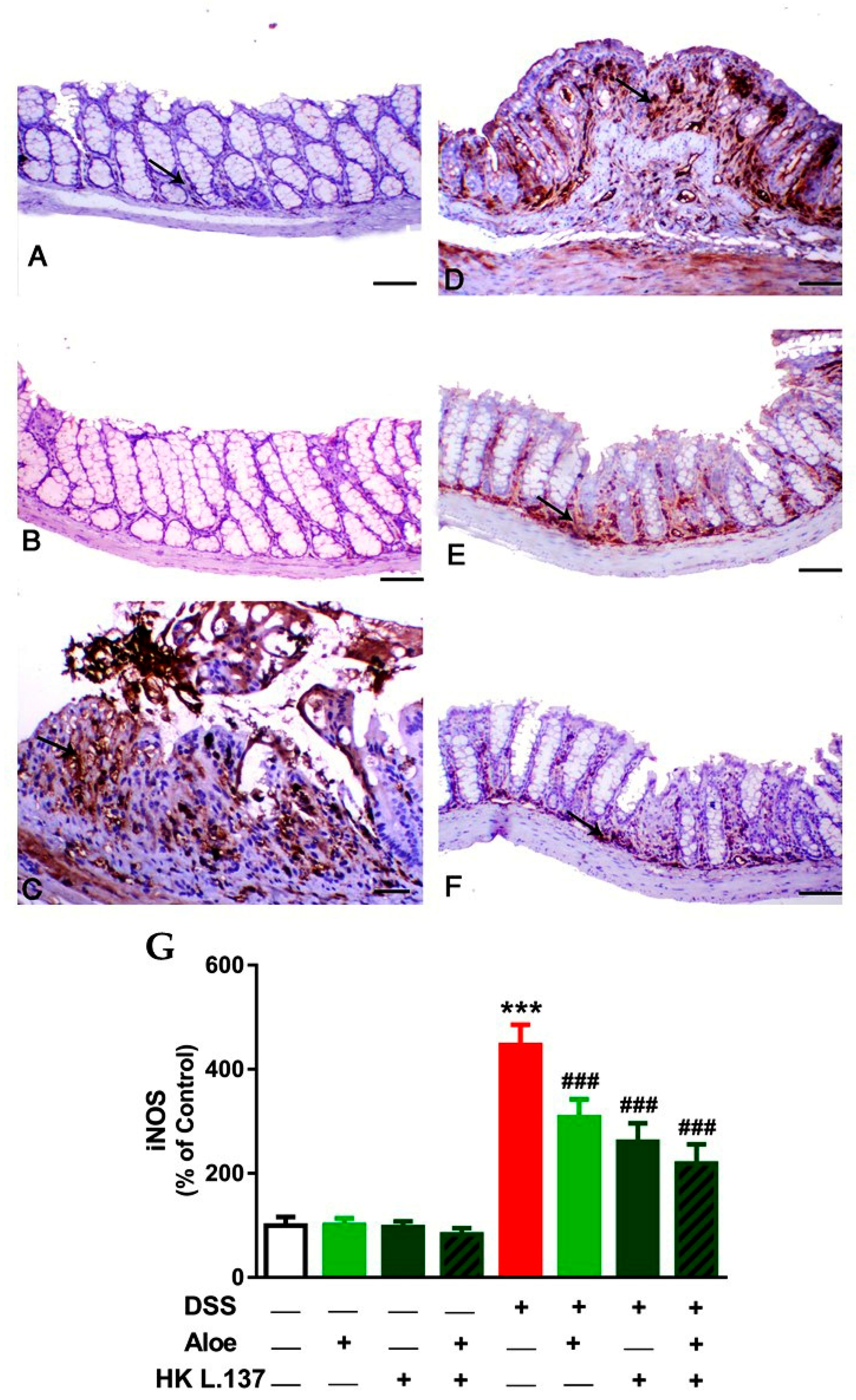 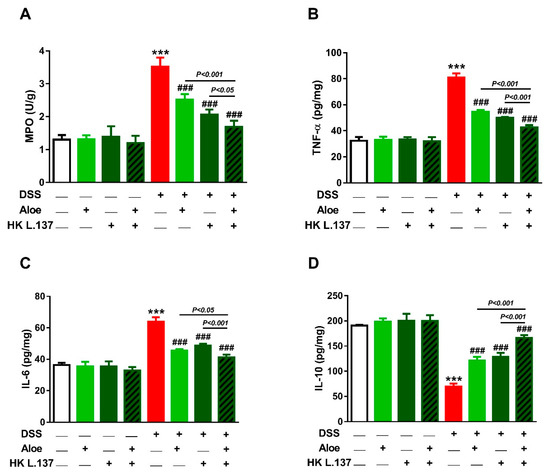