Quantifying the Effect of COD to TN Ratio, DO Concentration and Temperature on Filamentous Microorganisms’ Population and Trans-Membrane Pressure (TMP) in Membrane Bio-Reactors (MBR)
Previous Article in Special Issue

:
The aim of this study was to demonstrate the impact of processing parameters of the hot-melt extrusion (HME) on the pharmaceutical formulation properties. Carbamazepine (CBZ) was selected as a model water-insoluble drug. It was incorporated into Soluplus®, which was used as the polymeric carrier, to produce a solid dispersion model system. The following HME-independent parameters were investigated at different levels: extrusion temperature, screw speed and screw configuration. Design of experiment (DOE) concept was applied to find the most significant factor with minimum numbers of experimental runs. A full two-level factorial design was applied to assess the main effects, parameter interactions and total error. The extrudates’ CBZ content and the in vitro dissolution rate were selected as response variables. Material properties, including melting point, glass transition, and thermal stability, and polymorphs changes were used to set the processing range. In addition, the extruder torque and pressure were used to find the simplest DOE model. Each change of the parameter showed a unique pattern of dissolution profile, indicating that processing parameters have an influence on formulation properties. A simple, novel and two-level factorial design was able to evaluate each parameter effect and find the optimized formulation. Screw configuration and extrusion temperature were the most affecting parameters in this study.
Keywords:
hot-melt extrusion; design of experiment; process parameters; experimental trials

Over the years, hot-melt extrusion (HME) technique has been used successfully in pharmaceutical production [1]. Usually, HME is the process of pushing powder ingredients with a rotating screw under elevated temperature and pressure [2]. The melted materials are then put through a die to deliver an extrudate with uniform shape and size. The extrudates obtained may be in the form of films or rods that can be processed into the final desirable dosage form [3]. Several pharmaceutical products with different properties, such as immediate release, taste masking, and sustained release formulations, have been successfully produced by HME [2,3,4,5].
In HME, there are different processing variables that can be adjusted, including extrusion temperature, screw speed, feeding rate, and screw configuration [1,6]. Each one has its own function, and, at the same time, each one correlates with the other parameters to control the whole process [7]. For pharmaceutical extruders, processing parameters are the variables that can be changed to optimize the formulation. Setting the optimum screw speed or extrusion temperature is the first challenge in HME. The adjustment of these variables depends on the formulation properties, requirement, and economic factors. The best method suggested in the literature is to use a process parameter chart to show the correlation between the parameters [8]. Since each formulation has its own properties, each variable may show different influences with each formulation. Therefore, finding the right and the best processing parameter is a crucial step in HME production.
Several studies have been reported on the influence of HME processing parameters on the product quality of different drugs [9,10,11]. Several published reports also used different type of statistical techniques for the optimization of the processing parameters. Most of the studied statistical techniques suggest the use of a design of experiment (DOE) techniques, such as Taguchi design [12], Box–Behnken design [13], or response surface methodology [13]. However, these designs require the large numbers of experiment runs/trials in order to optimize the formulation or processing parameters. In most of the cases, this large numbers of run could not be possible due to materials availability, limited recourse, and high cost of active pharmaceutical ingredient (API). DOE is a statistical method that depends on studying different factors at different levels by comparing their response or effect [14]. This concept can be applied to HME application. HME has some variables that can be changed for example materials, temperature, screw speed, feeding rate, and screw configuration. Each one of those variables has different influences that can change the drug release or drug content, which can be used as a response measure for the DOE model. In the last few years, the large numbers of research papers have investigated the understanding of the process using different methods such as studying the variable parameters and in/on line process monitoring [15]. In addition, the Food and Drug Administration (FDA) added the process analytical technology (PAT) concept to their guidelines. According to the FDA, PAT is sets of techniques aimed to assess the critical process parameters to ensure the final product quality [16]. Therefore, several research efforts were made regarding the use of process understanding as a method of product quality control. A simple and effective design is highly recommended to facilitate the use of PAT and quality by design (QbD) concepts [17].
The main objective of this research was to find the simplest possible statistical method to optimize the processing parameters. A simple design will show which factor will significantly affect the formulation and will provide all the information required without the need to run a large number of experiments/trials. A novel HME design will save money, time, materials, and will not require a large amount of API. The current study is investigated the influence of processing parameters on the properties of carbamazepine (CBZ)–Soluplus® melt extrudates. It uses DOE to determine the effects of changes in the levels for each parameter on the response or behavior of the final product [18]. Design of experiment (DOE) software was used in this study to generate a design space in order to find the most significant factor that will affect the formulation. The design generated will include all possible combinations of each level of each of the parameters. This software allows the parameters to be set based on either numeric or categorical factors. Thus, DOE will be a good choice to evaluate the different parameters in HME. This study uses the “2-level full factorial design” from the DOE. In this study, we studied three different processing parameters at two levels. In addition, we developed an optimized formulation of CBZ with enhanced in vitro dissolution utilizing 2-level full factorial statistical design. This work was established to find out the relationship between HME final product quality and process parameters, using the DOE method. The measured responses in this study were in vitro drug-release profile and drug content. Quality response tests were performed to evaluate the parameter changes of screw configuration, screw speed, and temperature at different levels.

Thermal stability for CBZ and Soluplus® were determined by the thermo-gravimetric analysis performed, using a Perkin Elmer Pyris 1 thermo-gravimetric analyzer (TGA) equipped with Pyris manager software (PerkinElmer Life and Analytical Sciences, 719 Bridgeport Ave., Shelton, CT, USA). Each sample weighed three to eight milligrams and was heated from 20 to 250 °C, at a heating rate of 10 °C/min.

A Perkin Elmer Hyper Differential Scanning Calorimeter (DSC) (Perkin Elmer Life and Analytical Sciences, 710 Bridgeport Ave., Shelton, CT, USA) was used to analyze the samples. This instrument was equipped with Pyris manager software (Shelton, CT, USA). Each sample in this study weighed approximately 2–5 mg and was hermetically sealed in an aluminum pan. These samples were heated from 20 to 250 °C, at a linear heating rate of 10 °C/min.

A Waters HPLC, consisting of a Waters 600 binary pump, Waters 2489 UV/detector, and Waters 717 plus autosampler (Waters Technologies Corporation, 34 Maple St., Milford, MA, USA), determined the drug content. A Phenomenex Luna® C18 reverse phase column (5 µm 100 Å, 250 × 4.6 mm) was used as the stationary phase. Empower 2 software (Version 32, Waters, Milford, MA, USA, 2008) was used to analyze the data. The mobile phase was water:methanol:acetic acid (34:65:1 % v/v), and the UV detector was set at 285 nm wavelength. The flow rate was maintained at 1.0 mL/min, and 20 μL was injected from each sample. Drug-content uniformity was assessed by dissolving accurately weighed CBZ extrudates in methanol and subsequently quantified by using the HPLC procedure outlined above.

Extrudates samples were stored in a stability chamber, at 40 °C and 75% RH, for three months. Stability studies were performed after three months, and samples were tested for crystalline content by X-ray diffraction (XRD), chemical stability by HPLC, and in vitro release profile comparisons.

A 2-level full factorial design of experiment was performed using Design-Expert® software (Version 8.7.1, Stat-Ease Inc., Minneapolis, MN, USA, 2008). The total number of replicates were eight in this study. To compare between different formulations, statistical analysis was performed by utilizing one-way analysis of variance (ANOVA). A statistically significant difference was considered when p < 0.05.

This project work was supported by the Deanship of Scientific Research (DSR) at Prince Sattam bin Abdulaziz University, under the research project number (2020/03/11935); APC was also supported by DSR.

The authors are thankful to the Deanship of Scientific Research (DSR) at Prince Sattam bin Abdulaziz University, under the research project number (2020/03/11935). 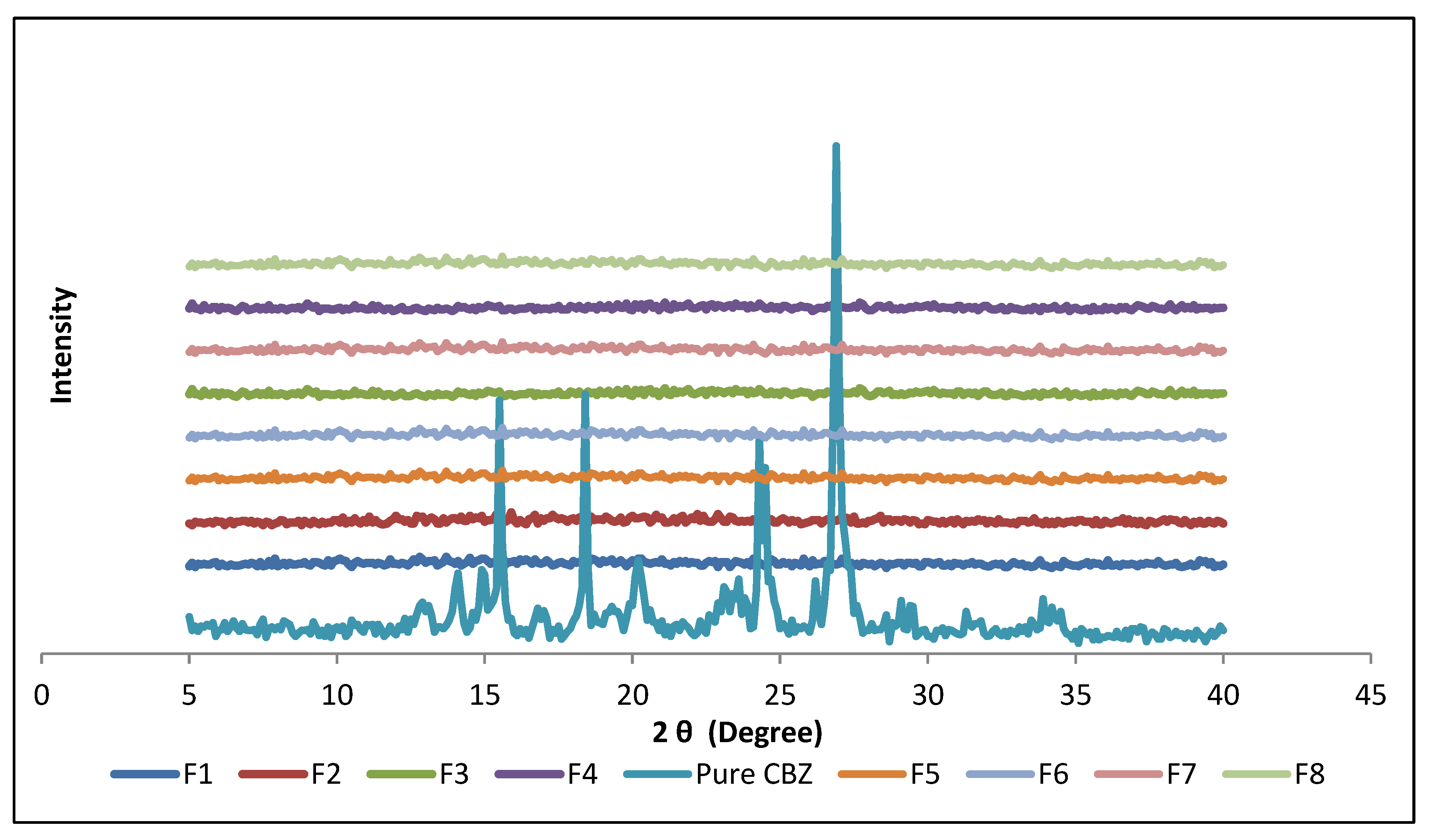 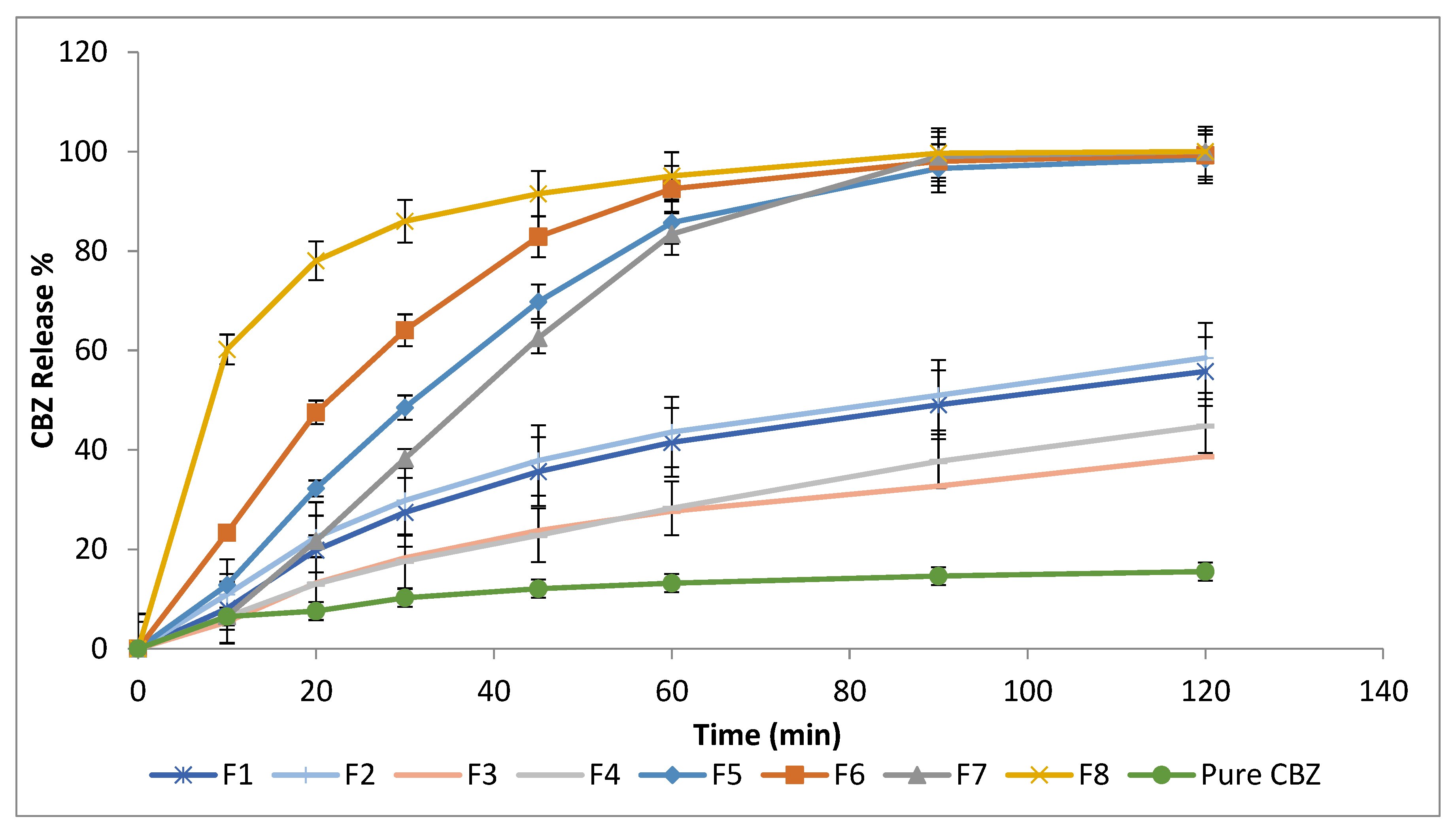