The use of an ultrasonic treatment for the extraction of pectin from Malus domestica ‘Fălticeni’ apple pomace, its effects on extraction yield and galacturonic acid content, and degree of esterification of the extracted pectin were investigated. The optimization of the extraction process showed that the highest yield of 9.183% pectin, with a 98.127 g/100 g galacturonic acid content and 83.202% degree of esterification, was obtained at 100% amplitude, pH of 1.8, SLR of 1:10 g/mL, and 30 min. The pectin obtained in optimal extraction conditions was compared to commercial citrus and apple pectin in terms of chemical composition (determined by FT-IR), thermal behaviour (analyzed by differential scanning calorimetry), rheological properties, and morphological structure (analyzed by scanning electron microscopy). By comparison to commercial citrus and apple pectin samples, the FT-IR analysis of pectin extracted by ultrasound treatment confirmed the high degree of esterification and showed similarity to that of apple pectin (88.526%). It was found that the thermal behaviour of the pectin obtained by ultrasound-assisted extraction was influenced by the narrower distribution of molecular weights and the orderly molecular arrangement, while the rheological properties (high viscosity, G0, and G1) of this sample were influenced by the morphological structure and the galacturonic acid content. The correlation coefficient showed a strong positive relationship between viscosity and galacturonic acid content (r = 0.992**). View Full-Text
Keywords: apple pomace; pectin; Malus domestica ‘Fălticeni’; ultrasound; optimization apple pomace; pectin; Malus domestica ‘Fălticeni’; ultrasound; optimization
►▼ Show Figures 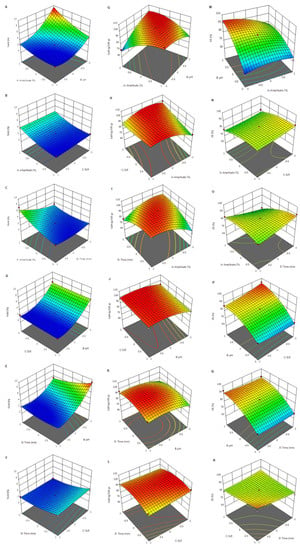