Modeling and Simulation of Energy Systems: A Review

The attempt to reduce the environmental impact of the petroleum sector has been the driver for researching energy efficient solutions to supply energy offshore. An attractive option is to develop innovative energy systems including renewable and conventional sources. The paper investigates the possibility to integrate a wind farm into an offshore combined cycle power plant. The design of such an energy system is a complex task as many, possibly conflicting, requirements have to be satisfied. The large variability of operating conditions due to the intermittent nature of wind and to the different stages of exploitation of an oil field makes it challenging to identify the optimal parameters of the combined cycle and the optimal size of the wind farm. To deal with the issue, an optimisation procedure was developed that was able to consider the performance of the system at a number of relevant off-design conditions in the definition of the optimal design. A surrogate modelling technique was applied in order to reduce the computational effort that would otherwise make the optimisation process unfeasible. The developed method was applied to a case study and the resulting optimal designs were assessed and compared to other concepts, with or without wind power integration. The proposed offshore power plant returned the best environmental performance, as it was able to significantly cut the total carbon dioxide (CO2) emissions in comparison to all the other concepts evaluated. The economic analysis showed the difficulty to repay the additional investment for a wind farm and the necessity of favourable conditions, in terms of gas and carbon dioxide (CO2) prices. View Full-Text
Keywords: oil and gas; offshore wind; combined cycle; hybrid system; kriging; multi-objective optimisation oil and gas; offshore wind; combined cycle; hybrid system; kriging; multi-objective optimisation
►▼ Show Figures 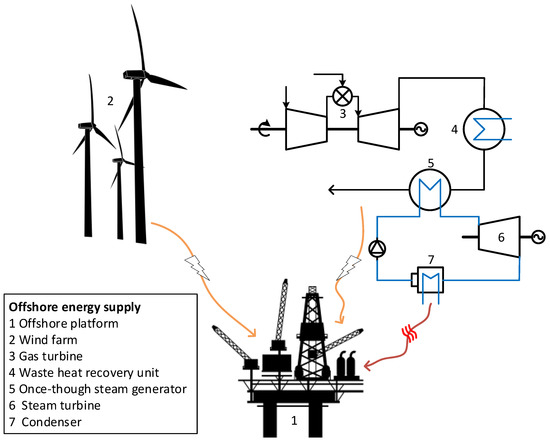