Kinetics of the Aqueous-Phase Copolymerization of MAA and PEGMA Macromonomer: Influence of Monomer Concentration and Side Chain Length of PEGMA

:
An in situ nuclear magnetic resonance spectroscopy (NMR) technique is used to monitor the aqueous-phase copolymerization kinetics of methacrylic acid (MAA) and poly(ethylene glycol) methyl ether methacrylate (PEGMA) macromonomers. In particular, the study analyses the effect of the number of ethylene glycol (EG) groups along the lateral chains of PEGMA and is carried out under fully ionized conditions of MAA at different initial monomer ratios and initial overall monomer concentrations (5–20 wt % in aqueous solution). The composition drift with conversion indicates that PEGMA macromonomer is more reactive than MAA. Individual monomer consumption rates show that the rates of consumption of both monomers are not first order with respect to overall concentration of the monomer. The reactivity ratios estimated from the copolymerization kinetics reveal, that for the short PEGMA, the reactivity ratios rMAA and rPEGMA increase with the solids content (SC). A totally different trend is obtained for the longer PEGMA, whose reactivity ratio (rPEGMA23) decreases with solids content, whereas the reactivity ratio of MAA remains roughly constant.
Keywords:
aqueous-phase copolymerization; polyethylene glycol methacrylate monomers; reactivity ratios; ionization degree; solids content 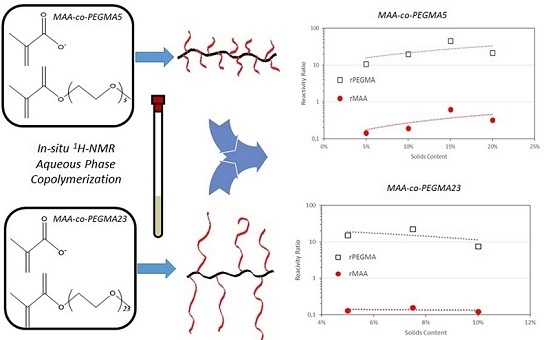 Aqueous-phase (mixture of H2O/D2O) free-radical copolymerization reactions of MAA and PEGMA were carried out in NMR tubes and the copolymerization reactions were in situ monitored. Comonomer solutions were prepared at different solids contents (5–20 wt %) with different monomer molar ratios (MAA/PEGMA5: 3/1, 2/1, 1/1 and MAA/PEGMA23: 9/1, 6/1, 3/1). Comonomer mixture solutions were neutralized with a 30% NaOH solution and kept at a pH between 7 and 9, ensuring total ionization of the carboxylic monomer in all cases. NaHCO3 was used as buffer at 1/1 mol ratio with respect to the initiator. All reactions were initiated with a water-soluble thermal initiator (potassium persulfate, KPS) at a concentration of 1 wt % based on monomer. Higher MAA/PEGMA monomer mol ratios were employed for the longer PEGMA (PEGMA23) because the difference in molecular weight between comonomers will lead to very low initial weight fraction of methacrylic acid (WMAA,0) and hence very low rate of polymerization [21]. Note that the monomer molar ratios expressed here are the nominal values; the actual monomer molar ratios were calculated from the vinyl peak areas of each monomer before starting the reaction (t0 in the NMR tube).
The liquid 1H-NMR spectra were recorded on a Bruker 500 AVANCE (500 MHz) equipped with a Z gradient Broadband observe (BBO) probe. The kinetic study of the reaction was conducted at 343 K using 1H spectra with suppress of the solvent using WATERGATE sequence. The spectrum was recorded every 2 min during the first 16 min and then every 10 or 15 min for 3 h. Monomer conversion of MAA and PEGMA were calculated based on the evolution of the peaks corresponding to the vinyl protons of MAA (δ, 5.60, 5.25, ppm) and PEGMA (δ, 6.10, 5.70, ppm). The peak related to the methoxy group protons (δ, 3.30, ppm), which is present in the PEGMA macromonomer side chain, was selected as internal reference [36]. Figure 1 illustrates the change on the intensity of the MAA and PEGMA peaks over copolymerization time. The spectra were processed by the software MestRe Nova 9.0 (MestreLab Research Chemistry Software solutions, Santiago de Compostela, Spain).

Free-radical copolymerization leads to the formation of copolymers in which the distribution of the monomers in the chain is governed by kinetics. There is considerable experimental evidence [37,38,39] showing that, in many copolymerization systems, propagation depends on the nature of the monomer and on the last two units of the growing chain. This is referred to as penultimate model. Nevertheless, copolymer composition can be well described by considering a model in which the reactivity of the propagation reaction is governed by the nature of the monomer and the terminal unit of the polymer radical (terminal model). In this work, the later assumption was considered to describe the copolymerization of MAA and PEGMA macromonomers. The reactivity ratios were estimated using the evolution of individual comonomer conversions over overall conversion following the method developed by De la Cal et al. [40,41]. This method is briefly described below:
Methacrylic acid (MAA) and polyethylene glycol methacrylate (PEGMA) will be represented with letters A and B, respectively. The material balances for each of the monomers in a batch reactor, considering that terminal model kinetics is applied, can be written as:
In Equations (1) and (2) [i] is concentration of monomer i (mol/L), Rpi, the polymerization rate of monomer i (mol/L·s), kpij, the propagation rate constant of radicals of terminal unit i with monomer j (L/mol·s), Pi the probability of finding active chain with ultimate unit of type i, and R* is the total concentration of radicals (mol/L).
Considering the Quasi-Steady-State assumption (QSSA) is fulfilled, the probabilities are defined as follows:
MAA conversion and overall conversion are defined as: where [A]0 and [B]0 are initial concentration of MAA and PEGMA, respectively. Thus: where rA and rB are the reactivities of MAA and PEGMA defined as:
To integrate Equation (9), concentrations can be expressed as a function of XA and XT employing Equations (5) and (6):
The cumulative composition can be determined as a function of the individual conversion of MAA, XA, and the overall conversion as follows:
The reactivity ratios rA and rB can be estimated using a parameter estimation algorithm that minimizes the objective function of Equation (14), where YAexp is the experimentally measured cumulative composition referred to MAA determined by in situ 1H-NMR, and YAcal is the theoretically determined cumulative composition calculated using the set of Equations (9)–(13) and the initial concentrations of the comonomers. The subscript i makes reference to the experiment, and subscript j to the sample number of each of the experiments used in the estimation procedure. The only parameters of the model are the reactivity ratios.
Parameter estimation was carried out using a direct-search estimation algorithm employing subroutine DBCPOL and the subroutine for solving ordinary differential equations DIVPRK from IMSL library.

The aqueous-phase copolymerization kinetics of MAA and PEGMA macromonomers (with two lateral chains of different number of EG groups, PEGMA5 and PEGMA23) under fully ionized conditions of MAA at different initial monomer ratios and initial overall monomer concentrations (solids content) were monitored by in situ NMR. The rate of consumption of both monomers indicates that PEGMA macromonomer is more reactive than MAA, and that the rates of consumption of both monomers are not first order with respect to the concentration of the monomer in agreement with recent results that demonstrated that, like for other water-soluble monomers, the propagation rate coefficient of these monomers depends on the concentration of the monomer.
The reactivity ratios estimated from the copolymerization kinetics revealed that this dependency of the propagation rate coefficient on the monomer concentration was also translated to the reactivity ratios of these monomers. Thus, it was found that for the short PEGMA the reactivity ratios rMAA and rPEGMA increased with the solids content. Interestingly, this trend was not maintained for the longer PEGMA, whose reactivity (rPEGMA23) decreased with conversion, whereas the reactivity ratio of MAA remained roughly constant with the longer PEGMA.
For both systems, empirical linear fits of the reactivity ratios with the solids content were calculated that can be easily implemented in modelling and control schemes aimed at controlling the microstructure of the comb-like copolymers.

This work has been carried out in the framework of the BASKRETE initiative under the umbrella of the EUSKAMPUS project. Iñaki Emaldi acknowledges the funding provided by EUSKAMPUS Fundazioa, POLYMAT and TECANLIA for his scholarship. Shaghayegh Hamzehlou and Jose Ramon Leiza acknowledge the funding provided by MINECO (CTQ 2014-59016P) and Basque Government (IT-999-16). Jorge Sánchez Dolado acknowledges the funding for the GEI Green Concrete Project given by the Basque Government (2015 Emaitek Program). The authors also thank the discussion with José Carlos de la Cal on the estimation of the reactivity ratios and they are grateful to José Ignacio Miranda and the SGIker Gipuzkoa Unit (UPV/EHU) for the NMR facilities. 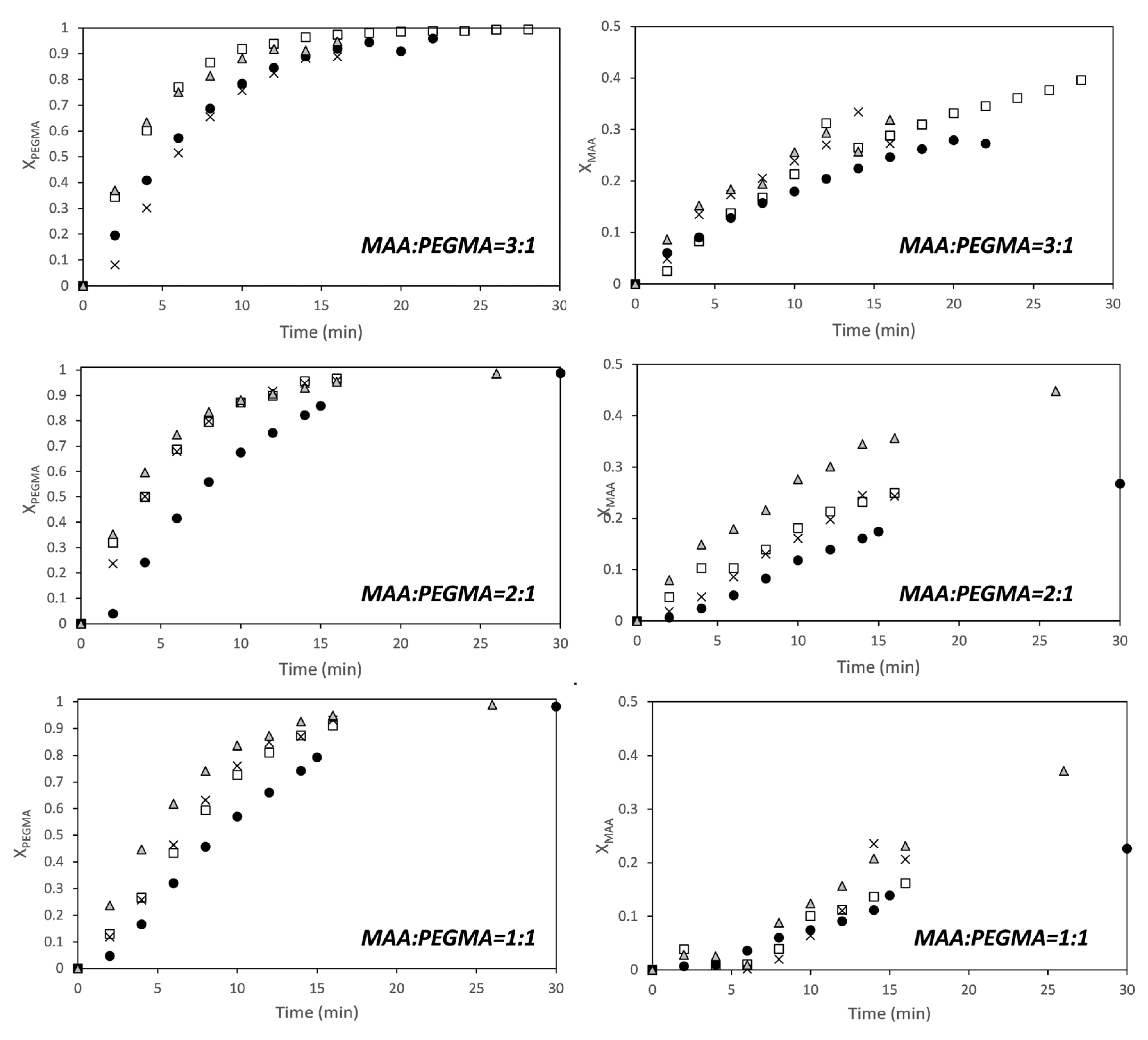 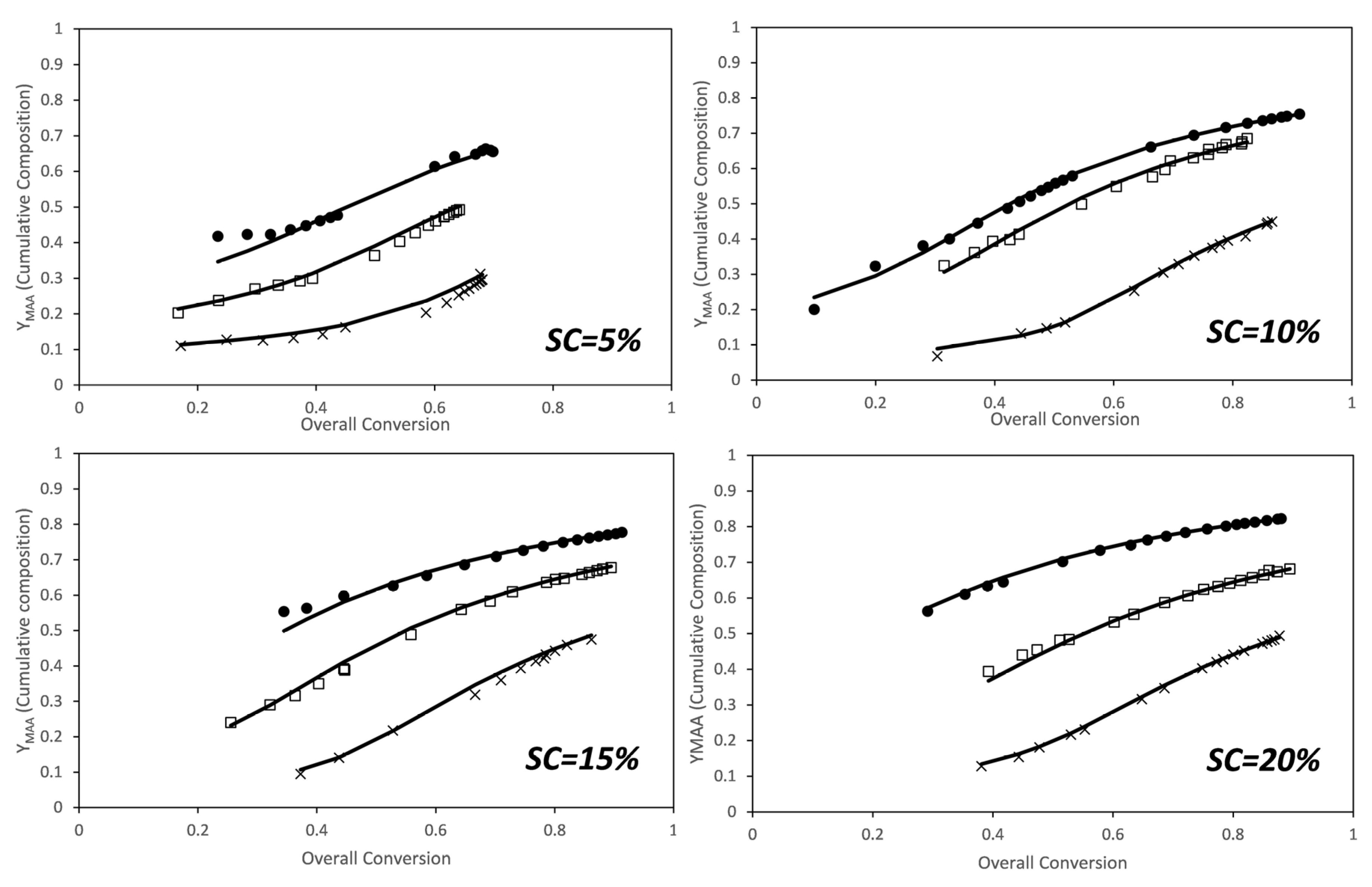 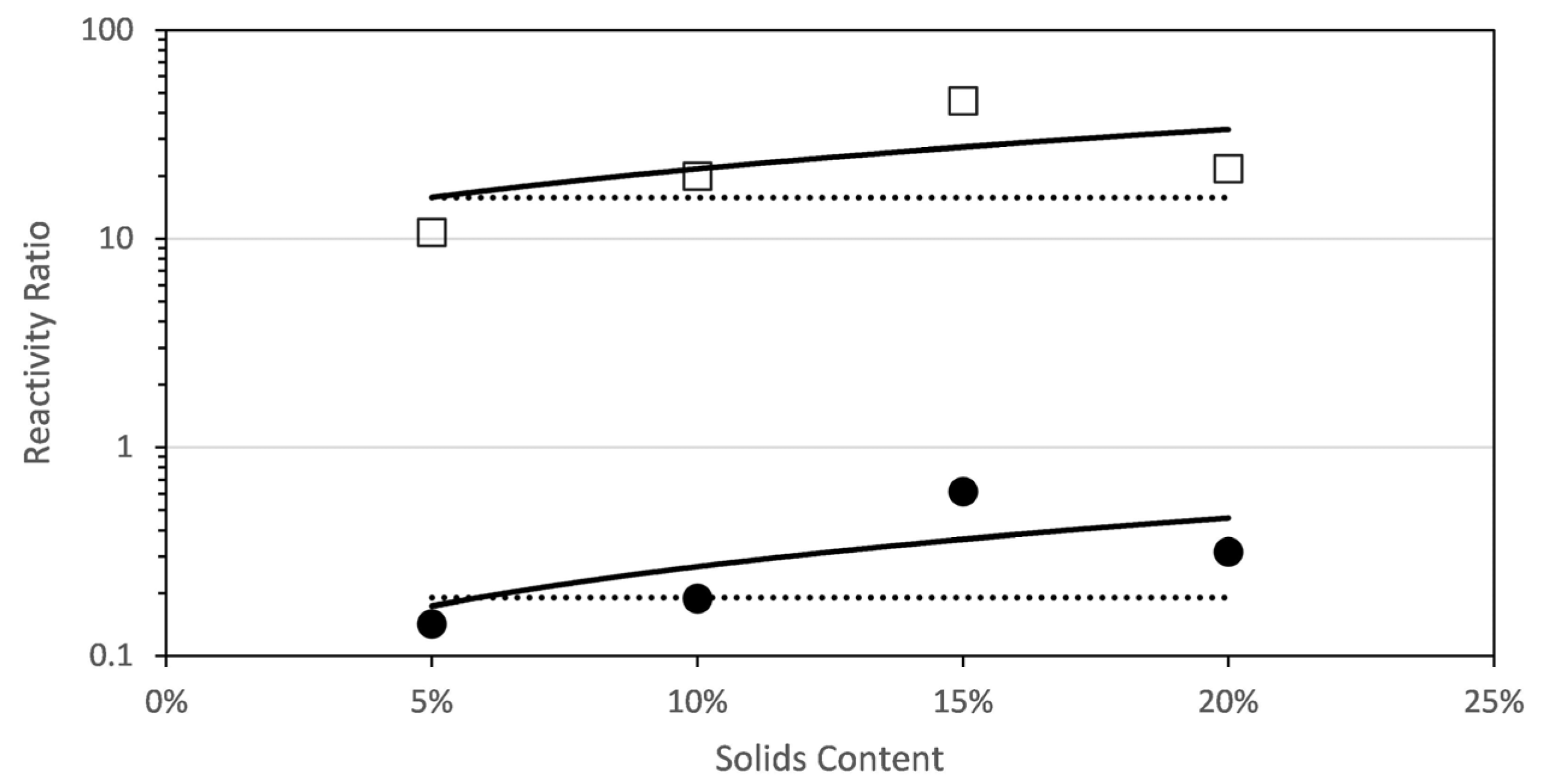 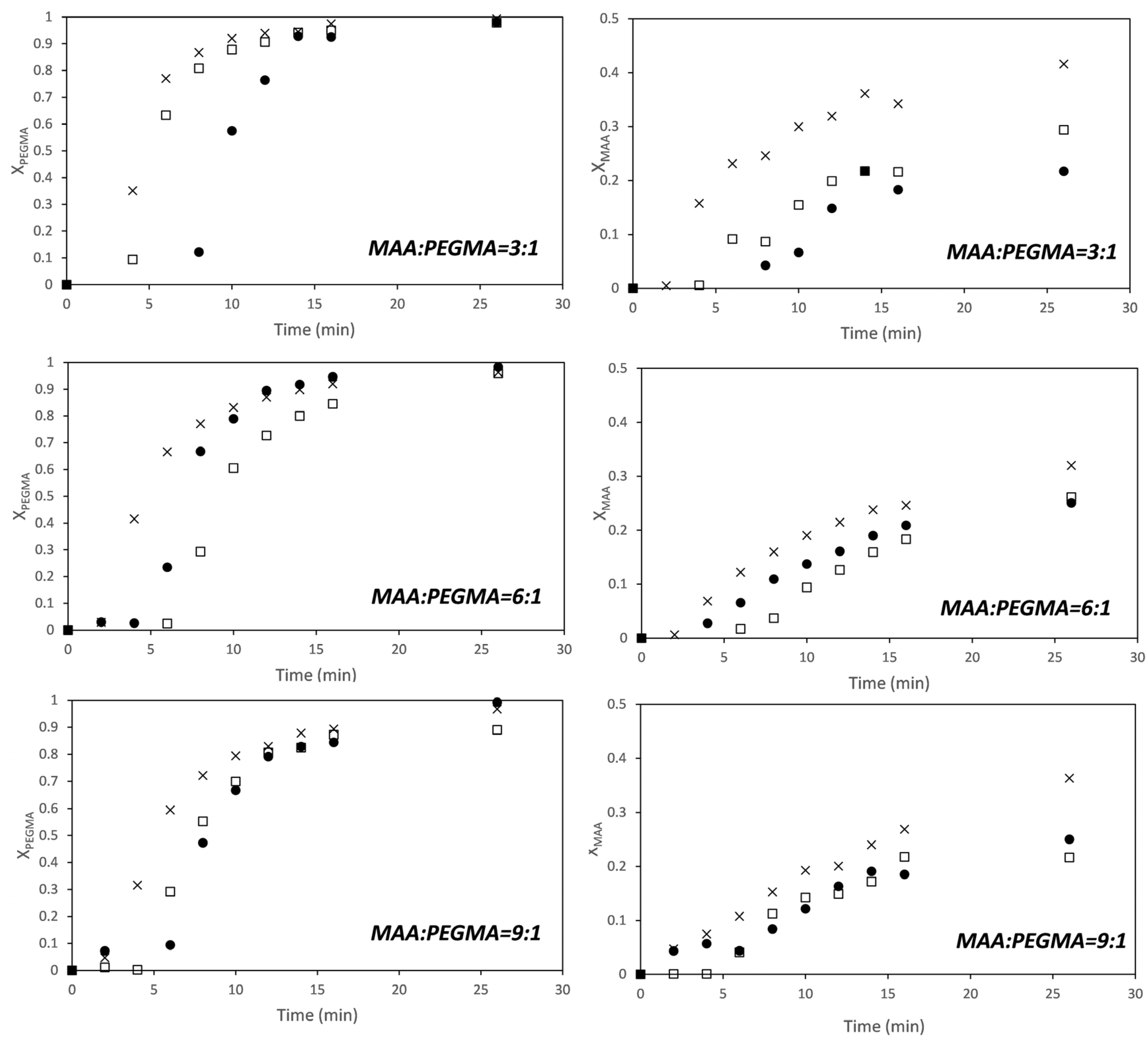 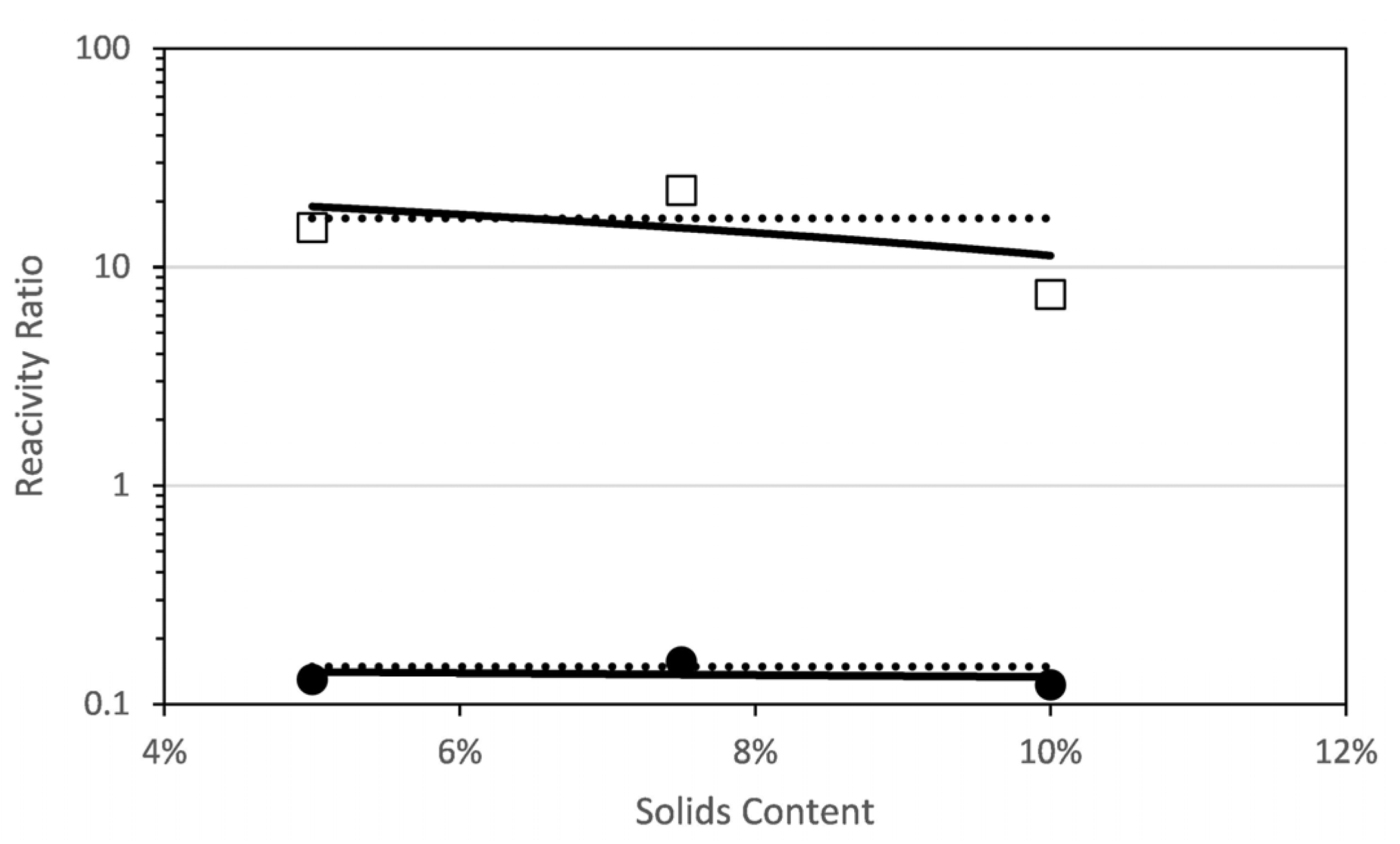