The aim of this study was to evaluate the effects of a complex Bacillus subtilis additive on the fermentation quality and bacterial community during the ensiling process of whole-plant corn silage (WPCS). The pH values of WPCS treated with the B. subtilis inoculant decreased faster than those of the control without inoculant, and significantly higher contents of lactic acid (LA) and acetic acid (AA) were observed. After 45 days of ensiling, the LA contents reached 7.95% (w/w). In the treatment group, the neutral detergent fibre (NDF) and acid detergent fibre (ADF) contents decreased significantly compared to the control, and the degradation rates of the NDF and ADF were 26.52% and 27.34% after 45 days, respectively. The deoxynivalenol (DON) content in the treatment group decreased to 205.67 μg/kg, which was significantly lower than the content of 382.51 μg/kg in the control group. The results indicated the positive effect of the B. subtilis inoculant in improving WPCS fermentation, especially in terms of degrading linocellulose and removing DON. The analysis of the bacterial community indicated that the B. subtilis inoculant resulted in an increased abundance of Lactobacillus, which contributed to the enhancement of LA production. The increased abundance of Bacillus possibly played a role in the degradation of NDF and ADF and the reduction in DON. Therefore, the complex B. subtilis additive could be used for the production of high-quality WPCS. View Full-Text
Keywords: Bacillus additive; lignocellulose; deoxynivalenol; bacterial community; ensiling process; whole-plant corn silage Bacillus additive; lignocellulose; deoxynivalenol; bacterial community; ensiling process; whole-plant corn silage
►▼ Show Figures 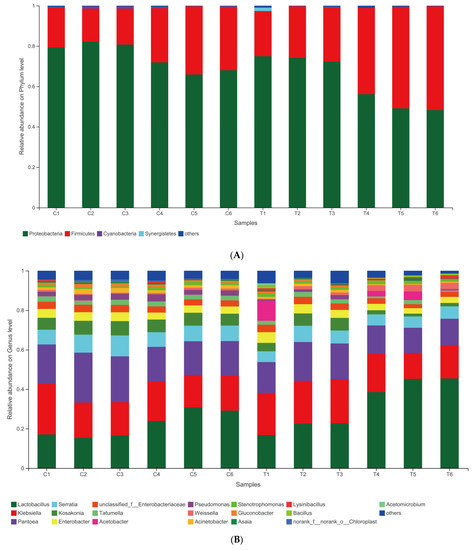