We explore the extent to which claim incidence in Disability Income Insurance (DII) is affected by changes in the unemployment rate in Australia. Using data from 1986 to 2001, we fit a hurdle model to explore the presence and magnitude of the effect of changes in unemployment rate on the incidence of DII claims, controlling for policy holder characteristics and seasonality. We find a clear positive association between unemployment and claim incidence, and we explore this further by gender, age, deferment period, and occupation. A multinomial logistic regression model is fitted to cause of claim data in order to explore the relationship further, and it is shown that the proportion of claims due to accident increases markedly with rising unemployment. The results suggest that during periods of rising unemployment, insurers may face increased claims from policy holders with shorter deferment periods for white-collar workers and for medium and heavy manual workers. Our findings indicate that moral hazard may have a material impact on DII claim incidence and insurer business in periods of declining economic conditions. View Full-Text
Keywords: actual-over-expected; counter-cyclical claims; disability income insurance; hurdle model; unemployment rate actual-over-expected; counter-cyclical claims; disability income insurance; hurdle model; unemployment rate
►▼ Show Figures 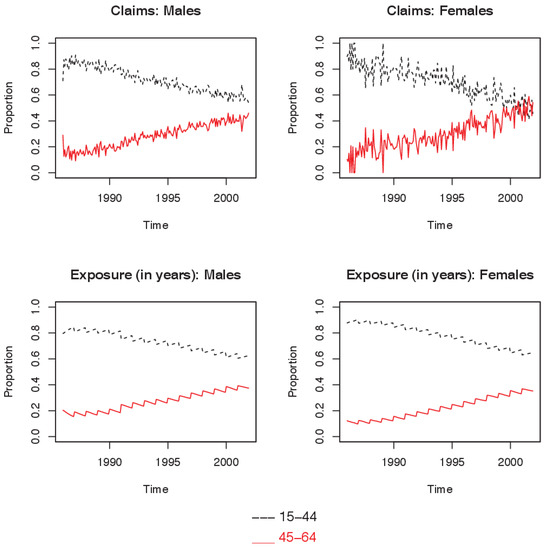