The Myth of Methuselah and the Uncertainty of Death: The Mortality Fan Charts

As every schoolchild knows, the oldest living man was Methuselah, the grandfather of Noah. Genesis tells us that he survived to the ripe old age of 969 years 1 and died in the same year as the Great Flood. The Sumerian literature goes even further: the Epic of Gilgamesh states that Utnapishtim, the Sumerian equivalent of Noah, was actually granted immortality as a gift from the gods. 2 By any comparison, the current generation of men living on this planet are weaklings, with only a few living to the measly age of 120.
Yet evidence has been growing over the last quarter century that the longevity of men in developed countries has been improving considerably. Demographers such as Vaupel et al. [1], Tuljapurkar et al. [2], Oeppen and Vaupel [3], and Tuljapurkar [4], argue that there is no natural upper limit to the length of human life and that we could be well on the way to living as long as Methuselah. The approach that these demographers use is based on an extrapolation of recent mortality trends. This approach has inevitably come in for criticism because it ignores factors relating to lifestyle and the environment that might influence future mortality trends. On the other hand, another group of demographers (e.g., Olshansky et al. [5,6,7], Mizuno et al. [8], and Loladze [9]) have suggested that future life expectancy might level off or even decline due to factors such as obesity and decreased food-derived health benefits associated with higher levels of atmospheric CO2. But even demographers (e.g., de Grey [10]) critical of the extrapolative forecasting approach adopted by Vaupel still accept the possibility that scientific advances and the socio-political responses to them might lead to substantial increases in life expectancy over the next century.
This debate within the demography profession clearly indicates that there is considerable uncertainty about future trends in mortality. In this article we seek to contribute further to this debate by providing some new mortality projections based on a calibrated mortality model that is known to provide good fit to recent mortality data (Cairns et al. [12]). The calibrations are based on the mortality rates of UK males aged 65 and older. The actual projections take the form of mortality fan charts – these are charts showing some central projection (such as the median, mode or mean) of the forecasted mortality rate, surrounded by bounds showing the probabilities that future mortality will lie within specified ranges. Fan charts are ideal for showing not only the most likely future outcomes, but also the degree of quantitative uncertainty surrounding future mortality rates, and have been used with considerable success by the Bank of England in its efforts to promote public debate on UK monetary policy. 3

The mortality fan charts presented here are a useful way of forecasting future mortality rates. They also quantify the uncertainty in our mortality projections and provide an intuitively revealing way of visually representing that uncertainty: put simply, the wider the fan charts, the more uncertainty there is. They are also quantitatively plausible, in so far as they are based on an underlying mortality model that is known to provide a good fit to the data, and because these data reflect recent mortality improvements.
Our fan charts suggest three main findings. First and foremost, despite recent mortality improvements, the fan chart projections suggest that no-one will live to the very extreme old ages that have sometimes been suggested in the more ‘optimistic’ literature on likely future longevity. According to these results, the idea that anyone will live to the ages reported for any of the unnaturally long-lived Patriarchs in Genesis—let alone Methusalah—is a pipe dream. Second, the fan charts clearly show that future mortality rates are highly uncertain and become more uncertain as the forecast horizon increases. They also show that future mortality rates for older cohorts are more uncertain than those for younger cohorts, other things being equal. Mortality rates are difficult to predict, especially for older cohorts, and this is so even though the mortality model provides a close fit to recent historical data: one is reminded of the old quip that forecasting is a difficult business, especially forecasting the future. Finally, the fan charts show that allowing for parameter uncertainty has a very major impact in widening the dispersion of estimated fan charts: as a rough rule of thumb, we found that allowing for uncertain parameters nearly doubles the dispersion of our fan charts. Failing to allow for parameter uncertainty therefore leads to fan chart forecasts that are far too narrow and that have lower bounds with a significant upwards bias. If we wish to reliably forecast the uncertainty in future mortality, we must therefore take account of the uncertainty in our parameter estimates as well. 6
These findings have obvious and disturbing implications for those providing services to the elderly such as health and long-term care or pensions. If people are living longer than previously anticipated, then provision needs to be made for more services for the elderly and pensioners will be drawing pensions for longer than expected. Someone then has to bear the resulting higher costs. In addition, since future mortality is very uncertain, the fan charts also suggest that the healthcare system, pension funds, life companies and, indeed, the state itself, are all heavily exposed to longevity risk, and their exposure to this risk needs to be managed.

KD and AJGC wrote the underlying software; all authors contributed to writing the paper.

The mortality fan charts discussed in this paper are based on an underlying mortality model set out by Cairns et al. [12]. Let q(t, x) be the realized mortality rate in year t + 1 (that is, from time t to time t + 1) of a cohort aged x at time 0. We assume that q(t, x) is governed by the following two-factor Perks stochastic process: where A1(t + 1) and A2(t + 1) are themselves stochastic processes that are measurable at time t + 1 (see Perks [18], Benjamin and Pollard [19]). Now let A(t) = (A1(t), A2(t)) and assume that A(t) is a random walk with drift: where μ is a constant 2 × 1 vector of drift parameters, C is a constant 2 × 2 lower triangular Choleski square root matrix of the covariance matrix V, and Z(t) is a 2 × 1 vector of independent standard normal variables. Cairns et al. (2006) show that this model provides a good fit to UK Government Actuary’s Department (GAD) data for English and Welsh males over 1961–2002. For each set of parameter values, we simulated 10,000 paths of A1(t + 1) and A2(t + 1), and then used these in Equation (A1) to obtain 10,000 simulated paths of q(t, x) over a chosen horizon. For each given t, the quantiles of q(t, x) were then obtained from the relevant order statistics of our ‘sample’ of q(t, x) values. These quantiles give us the bounds of the fan chart intervals. 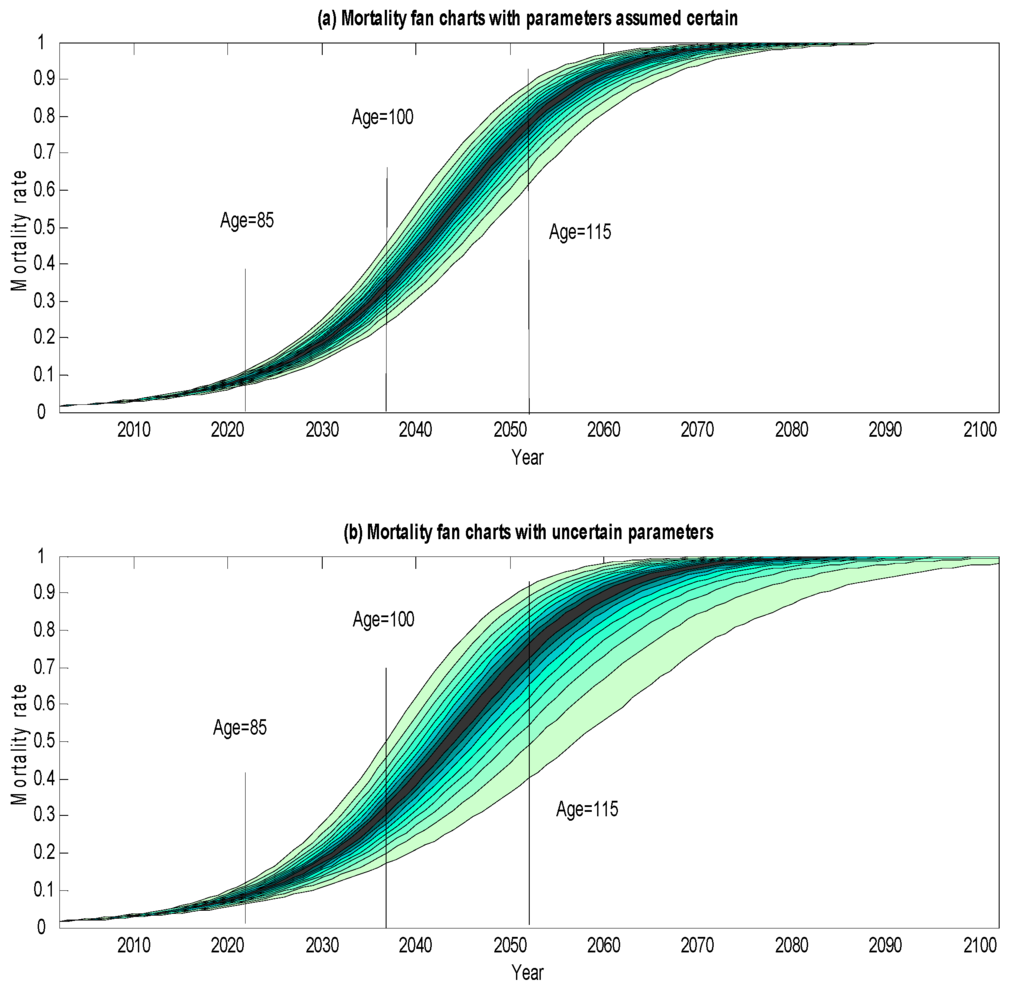