Prevalence and Determinants of Anemia among Children in Zanzibar, Tanzania: Analysis of Cross-Sectional Population Representative Surveys
Previous Article in Journal

A Neonate with Autosomal Dominant Pseudohypoaldosteronism Type 1 Due to a Novel Microdeletion of the NR3C2 Gene at 4q31.23
Previous Article in Special Issue

Emotion Dysregulation as a Mediator of the Relationship between Anxiety, Compulsive Exercise and Eating Disorder Symptoms in Adolescents

A total of 212 adolescent males (M = 13.39, SD = 1.22 years) and 189 adolescent females (M = 13.64, SD = 1.29 years) aged from 12 to 17 years-old, recruited from 8 secondary schools in Castilla-La Mancha (Spain) participated on the study. All participants were studying the compulsory secondary education in the Spanish education system. Inclusion criteria involved an age between 11 and 18 years; to understand the self-reported questionnaires; to give informed consent; and to have the written consent of their parents/legal guardians to participate in the study.

Eating disorder symptoms were assessed with the Spanish version of the Eating Disorder Inventory-3 (EDI-3) [53,54]. The 25-item EDI-3 consists of three subscales. The Drive for Thinness subscale (DT-EDI-3) examines the desire to be thinner and explores concerns about food and weight. The Bulimia subscale (B-EDI-3) measures aspects related to binge eating and the extent to which food intake is linked to negative emotional states. The Body Dissatisfaction subscale (BD-EDI-3) assesses the extent of dissatisfaction with body shape and size. Items are rated on a 6-point Likert-scale (0 = Never; 5 = Always). The EDI-3 showed good internal consistency (α = 0.86) in this sample.
The 7-item State-Trait Anxiety Inventory-Trait subscale (STAI-A) [55] from the State-Trait Anxiety Inventory (STAI) [56] was used. The STAI-A subscale assesses dispositional anxiety. Items were rated on a 4-point Likert-scale (0 = almost never; 3 = almost always). This subscale showed good internal consistency in the current sample (α = 0.72).
To measure compulsive exercise, the Spanish version of the Compulsive Exercise Test (CET) [57,58] was used. The CET is comprised of 24 items over 5 subscales: (a) Avoidance and Rule-Driven Behaviour; (b) Lack of Exercise Enjoyment; (c) Weight Control Exercise; (d) Mood Improvement; and (e) Exercise Rigidity. The CET is answered using a 5-point Likert-scale (0 = never true; 5 = always true). Higher scores are indicative of higher levels of compulsive exercise. A recent study with Spanish adolescents showed a good model fit of the CET when items 5 and 8 were removed [59], hence these items were also removed in this study. In this sample, the overall internal consistency of the CET was good (α = 0.88).
Rumination was measured with the Spanish adaptation of the Short Depressive Rumination Scale (SDRS) [60,61]. The SDRS consists of four statements derived from the Leuven Adaptation of the Rumination on Sadness Scale (LARSS) [62]. The scale evaluates rumination frequency in sad, down or depressed situations on a 10-point Likert scale (0 = not at all, 10 = very often). The internal consistency of the SDRS was good in the current sample (α = 0.83).
Emotional suppression was assessed via the expressive suppression subscale of the Emotion Regulation Questionnaire (ERQ) [63]. The ERQ was adapted to Spanish by Cabello et al. [64] and validated in an adolescent sample by Gómez-Ortiz and colleagues [65]. This subscale is composed of 4 items which require a response on a 7-point Likert scale (1 = totally disagree, 7 = totally agree). The reliability of this subscale was found to be good in this sample (α = 0.71).
Body Mass Index (BMI) was assessed by measuring participants’ height and weight, following the standardizsed protocol by the International Society for the Advancement of Kinanthropometry (ISAK) [66]. Height was measured using a portable height measure (Tanita, HR001) with a graduation of 1 mm. Weight was measured using a calibrated digital scale (Tanita, model HD-366) with a sensitivity of 0.1 kg.

This study was approved by the Albacete Hospital Ethics Committee. Adolescents and their parents were provided with details and the aims of the study via an information letter. The information letter also explained that participation in the study was voluntary and that participants could withdraw from the research at any time, without any repercussions. Finally, parents were provided with a telephone number and an email address to contact if they had any concerns about the research. Participants (and their parents) who agreed to participate provided written consent. Completion of the questionnaires occurred over two sessions (both of which took 15 to 30 min). A total of 28 participants were eliminated from the results because they were absent from school when the data collection was conducted. The percentage of participants with missing data was very low (2.35%). None of the questionnaires with missing data contained more than three missing values. Hence, to handle missing data, missing items were replaced with the median of that item from the rest of the sample. An author of the research was present at all data collection sessions in order to answer any questions or concerns. Before answering the questionnaires, the research assistant explained the main aims of the study and reminded participants of the possibility to withdraw without any consequences. At the end of the second session, the weight and height of each participant were individually measured by two researchers in a quiet room. To reduce bias in the weight measurement, participants were asked to wear shorts and a sleeveless T-shirt in the second session. We subtracted 0.5 kg (approximate weight of long trousers) from the weight of participants who wore long trousers (n = 161) instead of shorts at the second session, to obtain a more accurate weight.

First, Spearman’s correlations, means and standard deviations were calculated using SPSS v.23. Mann-Whitney U test was used to examine if there were significant differences between males and females on the measures. Second, in order to test our main aim (the functioning of compulsive exercise in the ECM prediction of EDs) and analyses direct effects between variables (Hypothesis 1 and 2), structural equation models (SEMs) were evaluated using the AMOS 19.0 software. The maximum likelihood was used to estimate all model parameters. In order to evaluate the fit of the models, we used χ2 statistic, the Comparative Fit Index (CFI) [67,68], and the root-mean-square error of approximation (RMSEA) [69]. According to Bentler [67], CFI values greater or equal to 0.90 are indicative of an acceptable fit. With regards to RMSEA, values lower or equal to 0.08 represent a reasonable fit [70]. With regards to χ2, a non-significant χ2 has been considered indicative of good fit [70].
Third, the indirect effects of anxiety on compulsive exercise via rumination and emotional suppression (Hypothesis 3) were examined with the bootstrapping sampling procedure [71]. Bias-corrected 95% confidence intervals on 5000 bootstrap samples were estimated for all direct and indirect effects. If the confidence interval did not include zero, the effect was significant.
Finally, post hoc power analyses were conducted following Jobst et al.’s specifications [72]. According to this procedure, the sample size used, the RMSEA model value, the α error probability and the model degrees of freedom are required to compute the statistical power of the tested model. For the analysis, we used the R package semPower [73]. Post hoc power values for the RMSEA statistic were calculated separately for males and females. For each group, the α error probability was specified to 0.050.

These preliminary results suggest that rumination (and not emotional suppression) may mediate the relationship between anxiety and compulsive exercise among male adolescents. These results are in line with the ECM, and suggest that harmful attitudes and behaviours may be used to cope with anxiety and rumination. Compulsive exercise, in turn, may be a dysfunctional emotional behaviour that also mediates the association between rumination and eating disorder symptomatology in adolescent males. Further experimental and longitudinal studies are needed to verify our findings and test compulsive exercise as a dysfunctional behaviour in the ECM. These findings highlight the importance of analysing emotional regulation strategies separately in order to understand the role of emotion regulation in ED symptomatology and improve preventive and treatment programs.

This research was funded by a grant for predoctoral contracts for research personnel in the framework of the UCLM R&D Plan, co-funded by the European Social Fund [2015/4062].

The study was conducted according to the guidelines of the Declaration of Helsinki, and approved by the Institutional Review Board (or Ethics Committee) of Albacete Hospital Ethics Committee (protocol code N10/2016). 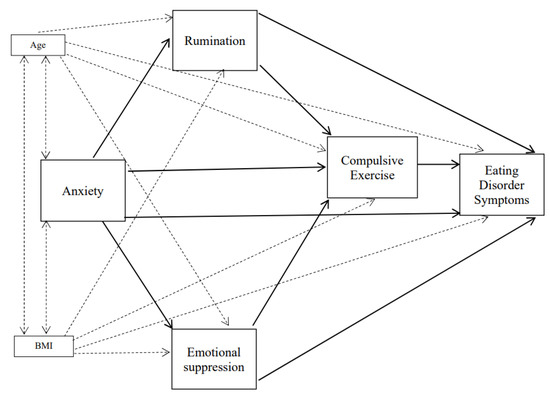 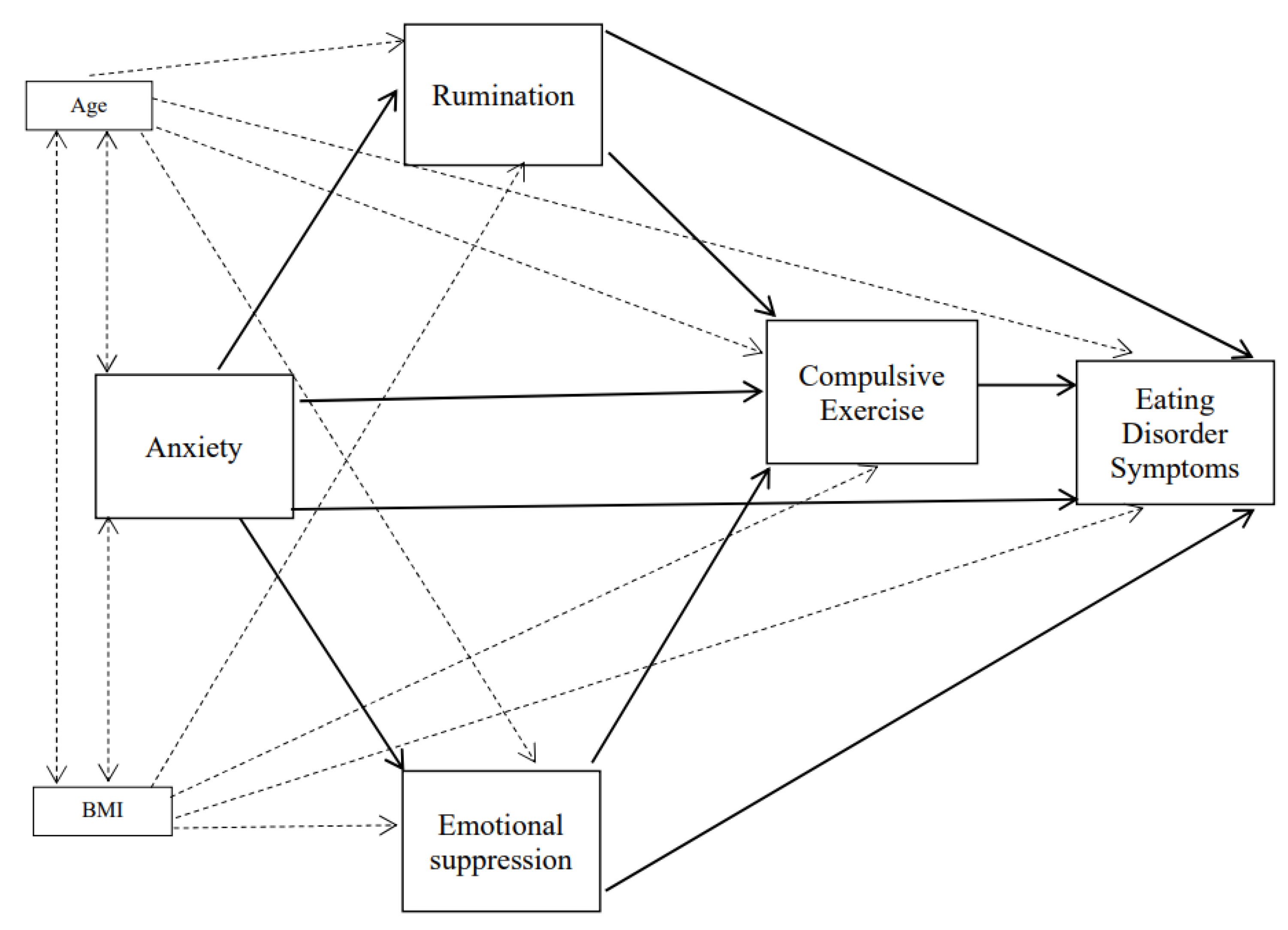 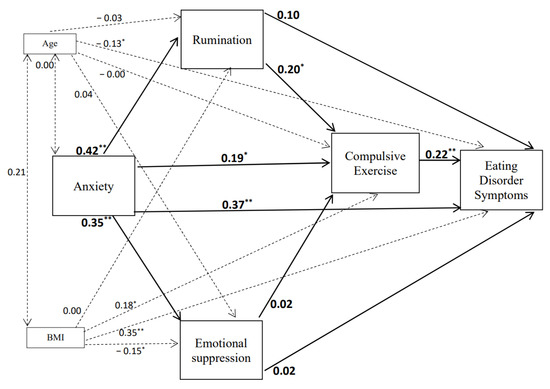 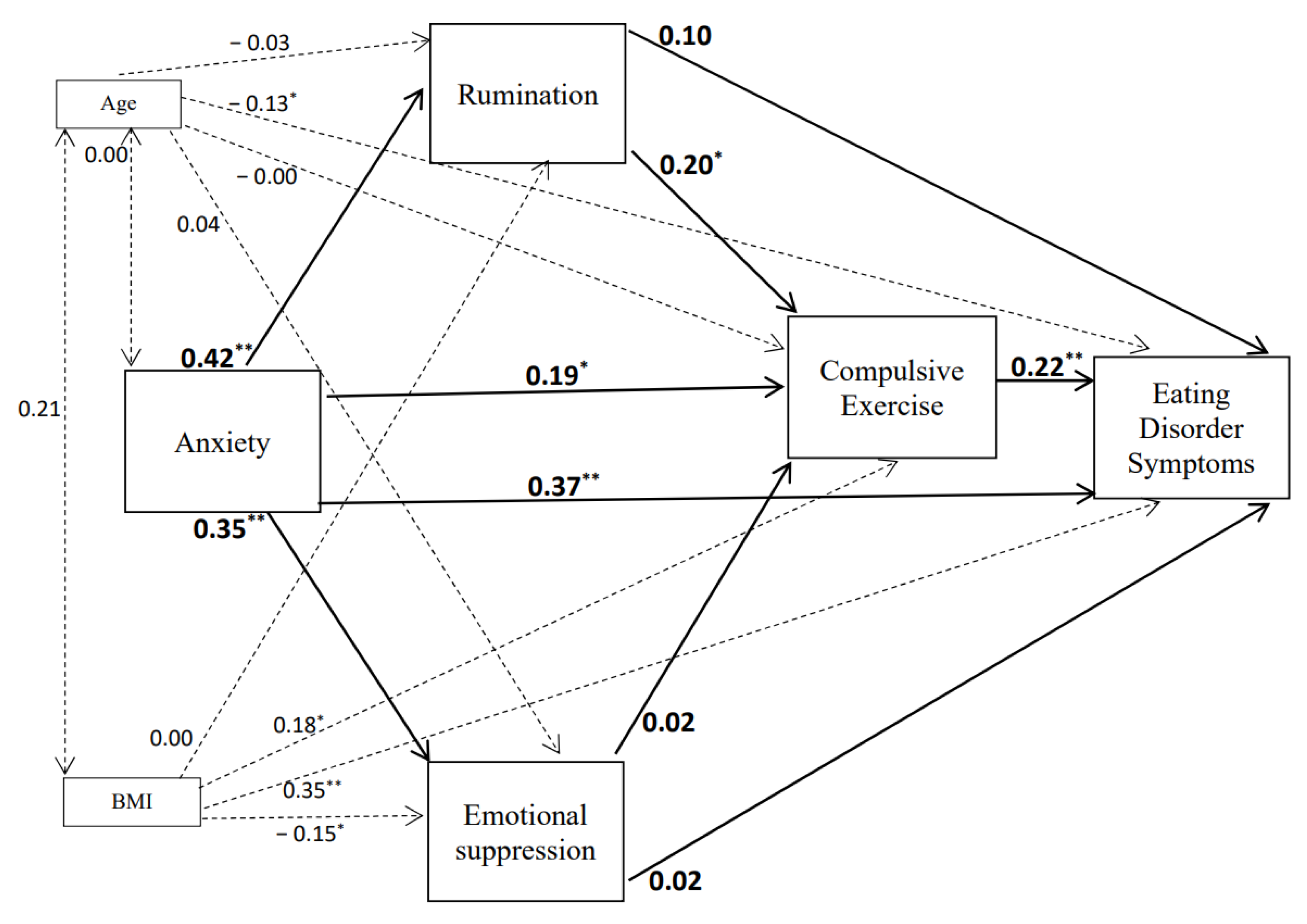 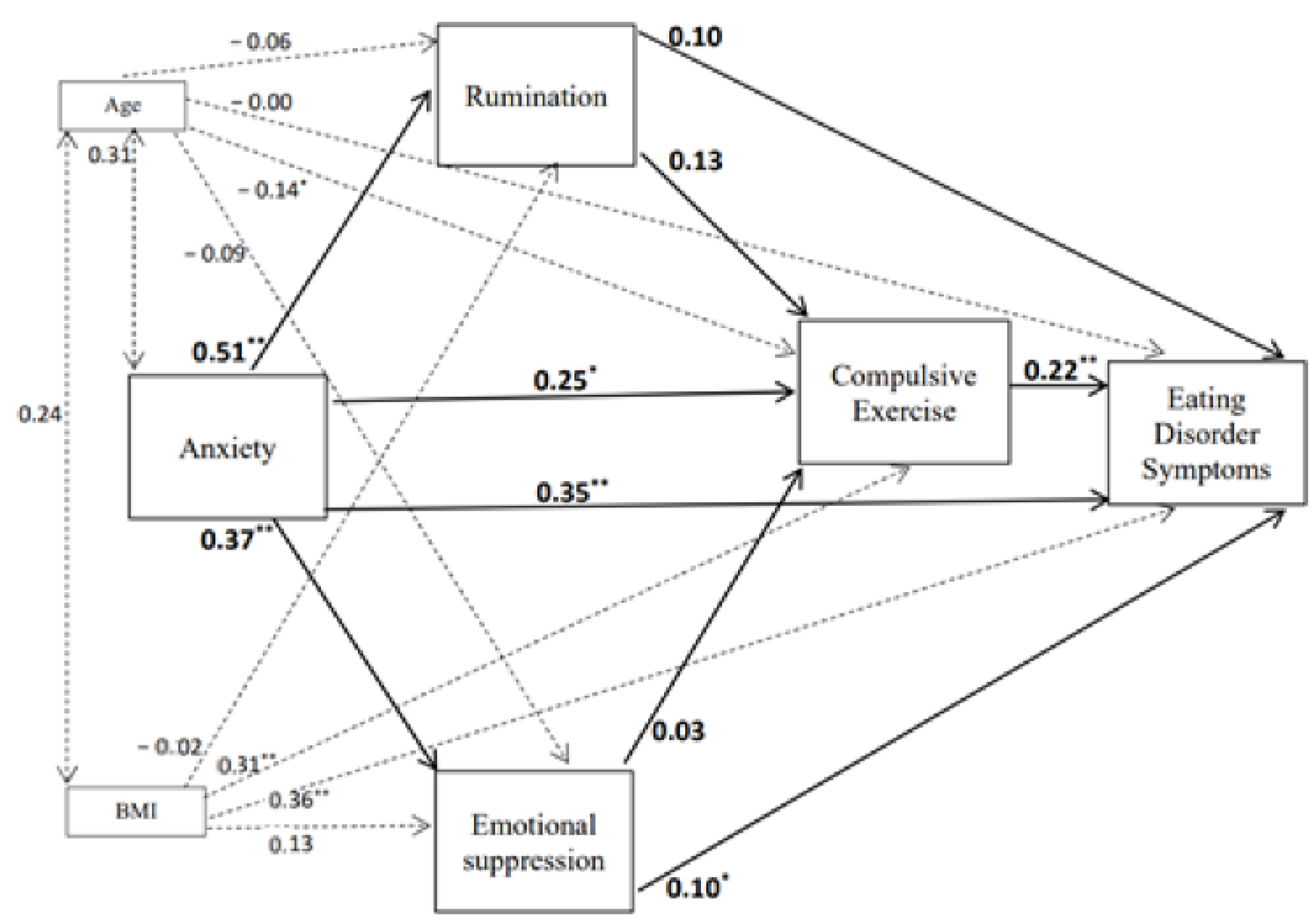