Daily Behaviors, Worries and Emotions in Children and Adolescents with ADHD and Learning Difficulties during the COVID-19 Pandemic
Previous Article in Journal

Jealousy, Violence, and Sexual Ambivalence in Adolescent Students According to Emotional Dependency in the Couple Relationship

:
Goal-oriented play activity encourages children to exercise and triggers the movement of body muscles. Active muscles are stronger, more agile, faster, and more powerful. Purpose: The purpose of this study is to determine that goal-oriented play activity in early childhood improves motor skills. Methods: Forty children aged 4.5–6 years old were recruited and took part in a set of training activities divided into Posts 1–5. To pass each post, a child had to run, walk on a balance beam, move sticks, throw and catch the ball, and arrange blocks. Training was given three times every week for 12 weeks. Data collected consisted of running 25 m, walking on the balance beam, throwing the ball as far as possible, locomotor movement, arranging cans, and bouncing the ball. Paired t and Wilcoxon signed-rank tests were used for analysis. Results: The results showed that there were significant differences in the motor skills evaluated pre- and post-training with p < 0.05. Conclusion: All six training activities conducted for 12 weeks provided significant improvements in the motor skills areas in children aged 4.5–6 years old.
Keywords:
motor skills; childhood; goal-oriented play activity

The research was approved by the ethical committee of the University of Yogyakarta (Ethics No: T/12/UN34.21/PT/2021). Forty participants were recruited from the children of Yayasan Ratih Kesuma Playgroup, consisting of 20 boys and 20 girls. The sample size was determined using an estimate of 30 individuals based on Cohen’s formulation [28] to achieve a power of 0.8, significance criterion α = 0.05, an effect size of 0.25 (large), and was within a large sample size population (population proportion = 0.5). Participants in this research were normal children aged 4.5–5 years old. The training study was needed because it helps to accelerate motor development. Motor skills play an important role in everyday life; therefore, the development of motor skills is one aspect of children’s development that must be optimized. The training study (goal-oriented play activity) data collection obtained permission from the school principal and all parents. Moreover, the activity was fun and safe. The game included six items. One game item lasted seven min, and each child had two chances. Thus, 7 min × 2 (two chances) × 6 game items = 84 min/day. This took place over 12 weeks, but on only 3 days per week, so the total was 36 days. The total duration was 84 min × 36 = 3024 min/50.4 h.
This training study program was carried out from 3 February to 3 April 2020 starting at 3:00 p.m. so it did not interfere with class hours. The training study was carried out in the community sports park, and the supervisor was the researcher himself assisted by the school principal. The researcher was assisted by two assistants when collecting the data. References indicating that the training study method of this program has a significant effect on improving motor skills are: (1) Wasenius et al. [29], who explained the effect of a physical activity training study on pre-schoolers’ fundamental motor skills; (2) Veldman, Jones, and Okely [30], who explained the efficacy of a gross motor skill training study in young children in an updated systematic review; and (3) Indah Lestari and Tri Ratnaningsih explained the effects of a modified game on the development of gross motor skills in pre-schoolers. Table 1 explains how each activity in the training study was performed [31].
To illustrate, Figure 1 below is an outline of the details of the pre- and post-data collection procedures and what units of measurement were used.
Below is the list of references for why such a measurement was used, what the significance of the measurement was in relation to fine motor skills improvement, and how it related.
This measurement was carried out because it was in accordance with the elements that define motor skills, namely, the elements of speed, leg power, arm power, and balance of coordination between eyes and hands. This measurement was very appropriate for the rating of motor skills because the elements of motor skills are speed, power, balance and coordination, and the skills increase after training. Because there is an increase in the elements or parts, there will be an overall increase. Below are the instruments/equipment used when data were collected:
Before the training program took place, the children were instructed about the activities to be carried out, namely, playing to improve their motor skills, but because of their nature the children often asked questions. The children were informed about the results of this data collection, and they were also told that their motor skills had improved, which made them happy.
The research involved 40 participants consisting of 20 boys and 20 girls aged 4.5 to 5 years. Participants were presented with goal-oriented play tasks moving from post 1 to 5 and comprised of walking on a balance beam, moving sticks, jumping goalposts, throwing balls, and arranging blocks. Movement from post 1 to 5 was carried out by running. This training was performed 3 times a week for 12 weeks. The data were collected using the 25 m run for the speed test, walking on a balance beam for the balance test, throwing the ball as far as possible to measure explosive arm force, the locomotor jump test to measure explosive limb power, arranging cans for eye–hand coordination, and bouncing the ball to measure eye–arm coordination.
The data were assessed for normality using Kolmogorov–Smirnov Z and Shapiro–Wilk tests. The results indicated that data for throwing the ball and bouncing the ball were consistently significant at p < 0.05 for both the pre- and post-training study measures. Items for the 25 m run, walking on a balance beam, locomotor jump test, and can arranging were normally distributed with p > 0.05 for the pre-test but not normally distributed in post-test for the 25 m run and balance beam. Paired t tests were used for normally distributed data and Wilcoxon signed-rank tests were used for data that were not normally distributed. Pre- and post-data were compared for improvements following the 12-week training study program, and the significance level was set at p < 0.05 at a 95% confidence interval.

The results showed that there were differences between pre- and post-training in the elements of motor ability in early childhood with a significance level of p < 0.05. For each component of motoric ability, there were differences in the 25 m run, locomotor jump, ball throws, can arrangement, and ball bounce. The 25 m run measured speed, the locomotor jump measured explosive power, ball throw as far as possible measured the arm’s explosive force, can arrangement measured eye and hand coordination, walking on a balance beam measured balance, and ball bounce measured the eye–hand coordination.
From Table 2 below, we see that all participants increased their ability between pre-training and post-training. Table 3, Table 4 and Table 5 summarizes the results of the pre and post-training improvements.

Goal-oriented play activity is fun for children because it makes them eager to repeat the same activity, and many benefits are gained through active play. The muscles’ ability to move will increase, and since they are stimulated, the child’s motor ability will also increase. Goal-oriented play is divided into five posts, namely, walking on the balance beam, moving sticks, locomotor jumping, throwing balls, and arranging blocks and can improve the motor skills in early childhood.
All six training exercises in the 12-week training program provided significant improvements in the motor skills areas of children aged 4.5–6 years. The level of improvement in motor skills during early childhood may benefit from goal-oriented active play and increased motor ability.

The research was approved by the ethical committee of the University of Yogyakarta (Ethics No: T/12/UN34.21/PT/2021). Participants were recruited from the children of the Yayasan Ratih Kesuma Playgroup with the total number of children being 40, 20 boys and 20 girls.

This research is supported by Yogyakarta State University, Indonesia, and the University of Malaya, Malaysia.

We know of no conflict of interest associated with this publication, and there has been no significant financial support for this work that could have influenced its outcome. As corresponding author, I confirm that the manuscript has been read and approved for submission by all the named authors. 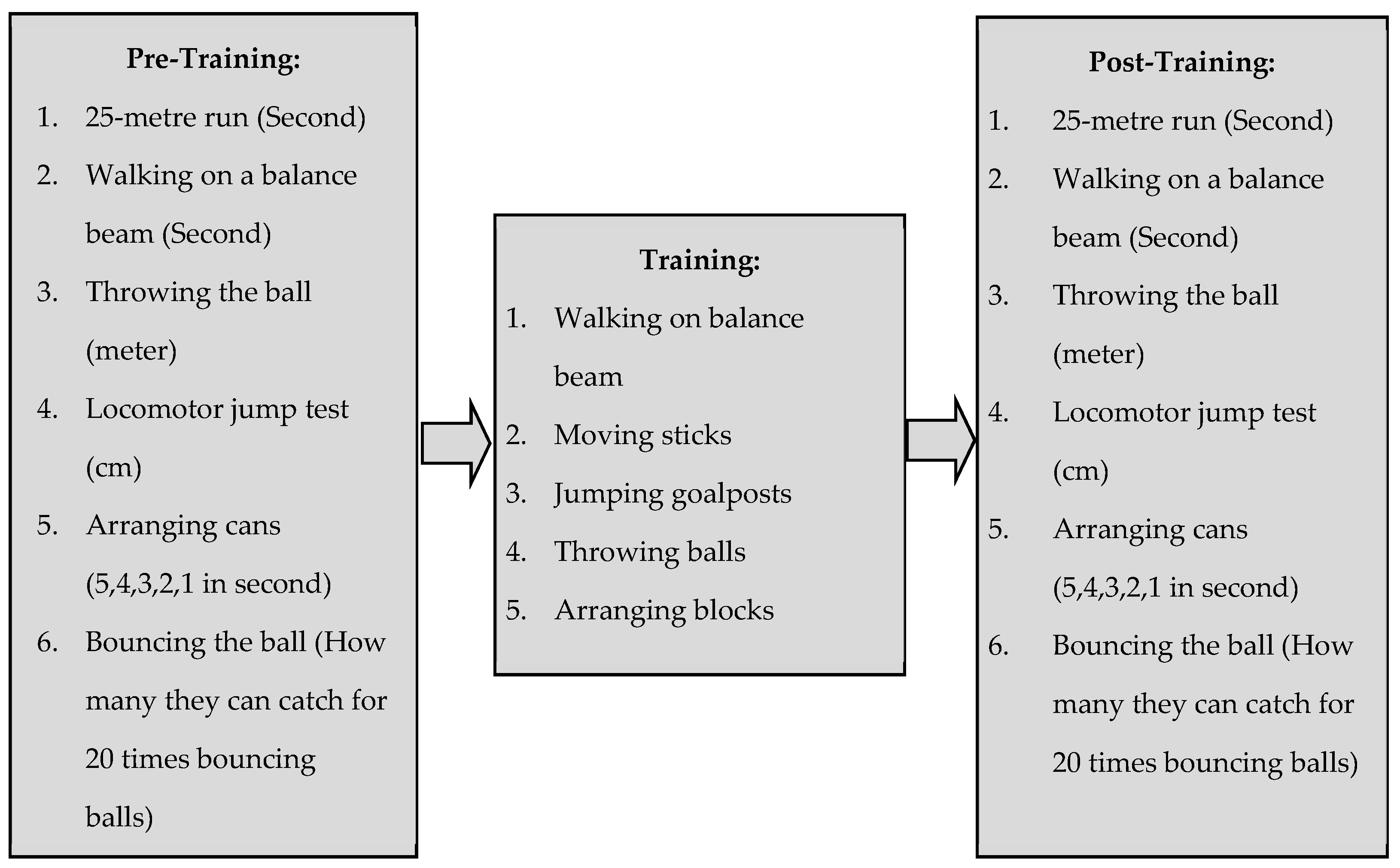