Interferon gamma (IFN-γ) is an important cytokine with antiviral, antibacterial, and immunosuppressive properties. It has been used as a biomarker for the early detection of several diseases, including cancer, human immunodeficiency virus (HIV), tuberculosis, and paratuberculosis. In this study, we developed an electrochemical biosensor composed of multifunctional DNA 3WJ to detect IFN-γ level with high sensitivity. Each multifunctional triple-stranded aptamer (MF-3WJ) was designed to have an IFN-γ aptamer sequence, anchoring region (thiol group), and 4C–C (cytosine–cytosine) mismatch sequence (signal generation), which could introduce silver ions. To generate the electrochemical signal, four Ag+ ions were intercalated (3wj b-3wj c) in the 4C–C mismatch sequence. MF-3WJ was assembled through the annealing step, and the assembly of MF-3WJ was confirmed by 8% tris–boric–EDTA native polyacrylamide gel electrophoresis. The Au microgap electrode was manufactured to load sample volumes of 5 µL. The reliability of electrochemical biosensor measurement was established by enabling the measurement of seven samples from one Au microgap electrode. MF-3WJ was immobilized on the Au microgap electrode. Then, cyclic voltammetry and electrochemical impedance spectroscopy were performed to confirm the electrochemical properties of MF-3WJ. To test the electrochemical biosensor’s ability to detect IFN-γ, the limit of detection (LOD) and selectivity tests were performed by square wave voltammetry. A linear region was observed in the concentration range of 1 pg/mL–10 ng/mL of IFN-γ. The LOD of the fabricated electrochemical biosensor was 0.67 pg/mL. In addition, for the clinical test, the LOD test was carried out for IFN-γ diluted in 10% human serum samples in the concentration range of 1 pg/mL–10 ng/mL, and the LOD was obtained at 0.42 pg/mL. View Full-Text
Keywords: aptasensor; biomarker; IFN-γ detection; electrochemical biosensor aptasensor; biomarker; IFN-γ detection; electrochemical biosensor
►▼ Show Figures 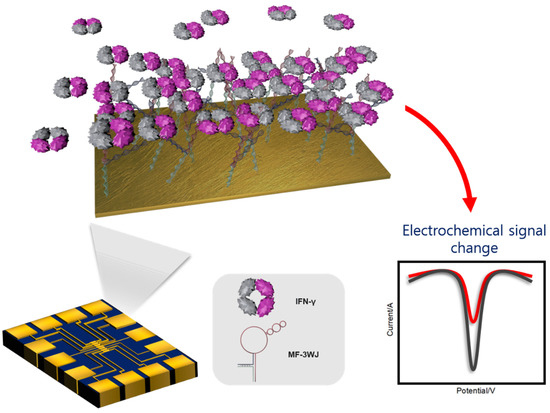