Addition of K22 Converts Spider Venom Peptide Pme2a from an Activator to an Inhibitor of NaV1.7

Before the advent of modern medicine, natural resources were widely used by indigenous populations for the prevention and treatment of diseases. The associated knowledge, collectively described as folk medicine or traditional medicine, was largely based on trial-and-error testing of plant extracts (herbal remedies) and the use of invertebrates, particularly medicinal maggots of the blowfly Lucilia sericata and blood-sucking leeches. The widespread use of traditional medicine in the West declined as scientific advances allowed reproducible testing under controlled conditions and gave rise to the modern fields of biomedical research and pharmacology. However, many drugs are still derived from natural resources, and interest in traditional medicine has been renewed by the ability of researchers to investigate the medical potential of diverse species by high-throughput screening. Likewise, researchers are starting to look again at the benefits of maggot and leech therapy, based on the hypothesis that the use of such animals in traditional medicine is likely to reflect the presence of specific bioactive molecules that can be developed as drug leads. In this review, we consider the modern medical benefits of European medicinal leeches based on the systematic screening of their salivary proteins. View Full-Text
Keywords: medicinal leeches; drug discovery; Hirudo spec.; antistasins; hirudin; eglins; saratins medicinal leeches; drug discovery; Hirudo spec.; antistasins; hirudin; eglins; saratins
►▼ Show Figures 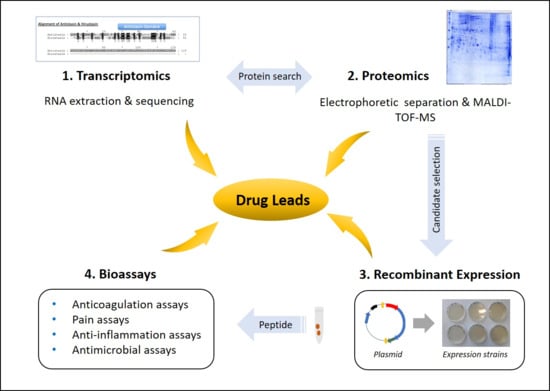