Flexible in vitro translation (FIT) was used as a screening method to uncover a new methodology for peptide constraining based on the attack of a nucleophilic side-chain functionality onto an oxidized furylalanine side chain. A set of template peptides, each containing furylalanine as furan-modified amino acid and a nucleophilic residue (Cys, His, Lys, Arg, Ser, or Tyr), was produced through FIT. The translation mixtures were treated with N-bromosuccinimide (NBS) to achieve selective furan oxidation and subsequent MALDI analysis demonstrated Lys and Ser as promising residues for cyclisation. Solid-phase peptide synthesis (SPPS) was used to synthesize suitable amounts of material for further in-depth analysis and characterisation. It was found that in the case of the peptide containing lysine next to a furylalanine residue, a one-pot oxidation and reduction reaction leads to the generation of a cyclic peptide featuring a pyrrole moiety as cyclisation motif, resulting from the attack of the lysine side chain onto the oxidized furylalanine side chain. Structural evidence was provided via NMR and the generality of the methodology was explored. We hereby expand the scope of our previously developed furan-based peptide labeling and crosslinking strategy. View Full-Text
Keywords: constrained peptides; flexible in vitro translation; furan oxidation; peptide cyclisation constrained peptides; flexible in vitro translation; furan oxidation; peptide cyclisation
►▼ Show Figures 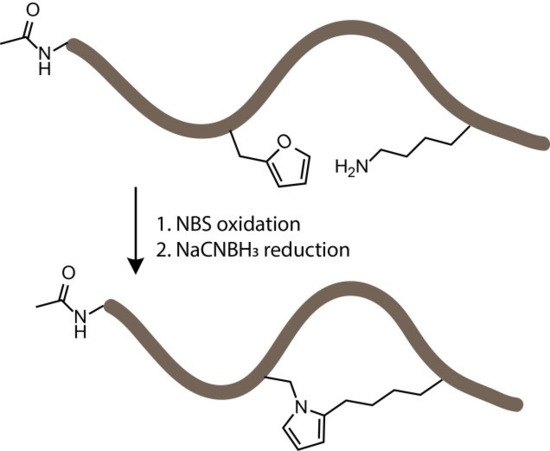