Aptamers are single-stranded DNA or RNA molecules that can be identified through an iterative in vitro selection–amplification process. Among them, fluorogenic aptamers in response to small molecules have been of great interest in biosensing and bioimaging due to their rapid fluorescence turn-on signals with high target specificity and low background noise. In this review, we report recent advances in fluorogenic aptasensors and their applications to in vitro diagnosis and cellular imaging. These aptasensors modulated by small molecules have been implemented in different modalities that include duplex or molecular beacon-type aptasensors, aptazymes, and fluorogen-activating aptamer reporters. We highlight the working principles, target molecules, modifications, and performance characteristics of fluorogenic aptasensors, and discuss their potential roles in the field of biosensor and bioimaging with future directions and challenges.
Keywords: aptamer; aptasensor; aptazyme; fluorogen; small molecule; RNA reporter aptamer; aptasensor; aptazyme; fluorogen; small molecule; RNA reporter

Aptamer-based biosensors (aptasensors) have made significant progress in multidisciplinary fields because aptamers, single-stranded (ss) DNA or RNA molecules, have been used as bioreceptors because of their excellent abilities, including easy modification, reproducible synthesis, small size, and high thermal stability compared to antibodies [1]. Concurrently, their structural diversity and target-dependent conformational changes have given rise to various biosensing platforms, such as optical [2,3,4], electrochemical [5,6], and mass-based detection [7] in a label-free or label-based manner. Among them, fluorescence (FL)-based aptasensors have been considered the most effective and sensitive method with a broad dynamic range and applicability [8]. To detect or monitor small molecules that play a variety of roles in living organisms or environments, these aptasensors are more suitable as fast and sensitive tools, compared to traditional mass spectrometry or chromatography methods, which are time-consuming and cumbersome. Given the innate ability of nucleic acids to bind to small molecules, it is not surprising that aptamers act as efficient receptors for small molecules. The FL-based aptasensors can be divided into two groups based on their structural change: fluorescent and fluorogenic aptasensors. Unlike fluorescent aptasensors that rely on dye-labeled aptamers as affinity tags for targets [9,10,11], fluorogenic aptasensors lead to higher signal-to-background ratios because non-fluorescent aptasensors under normal conditions can emit a bright FL signal only when recognizing target molecules [12,13]. This fluorogenic process is derived from the structural change in aptamers and has been harnessed for kinetic and/or homogenous detection without the need for washing steps. For example, Förster resonance energy transfer (FRET) using aptamers labeled with a dye-to-quencher can yield sensitive FL signals at the nanoscale only upon binding small molecules [14], including metal ions, antibiotics, toxins, metabolites, and other small ligands. This switchable and real-time detection of small molecules is otherwise difficult to realize using other bioreceptors or other detection formats.
Recently, the unique advantages of fluorogenic aptamers have been extensively employed in combination with nanomaterials [15,16] or enzymatic features [17,18,19] to increase the detection sensitivity. Because nucleic acids confer easy conjugation with nanomaterials or induce sequence-dependent transformations to obtain switchable sensors or enzymatic activity in the presence of small ligands, this format takes a step further as smart sensing platforms in many applications. In addition, genetically encoded RNA aptamers activated by fluorogens have been attractive as protein-independent reporters, enabling dynamic imaging of transcriptional RNAs or metabolites with high structural stability in living cells [20,21], as is the case with genetically encoded fluorescent proteins.
Herein, we review recent advances in fluorogenic aptasensors in response to small molecules. Most FL-based aptamers have focused on affinity-based assays or targeted images, as reviewed earlier [22,23,24,25]. To discriminate conventional aptamer-based affinity assays, we highlight innovative fluorogenic aptamers based on small molecule-induced structural changes. This content consists of three categories: duplex or molecular beacon-type aptasensors, aptazymes, and fluorogen-activating aptamer reporters. In addition to an elaborative description of the diverse functions and wide applications of fluorogenic aptamers in biosensing and bioimaging, we discuss the current limitations and future aspects to promote the development of fluorogenic aptasensors.

Fluorogen-bound fluorescent RNA aptamers inspired by chromophore-incorporated fluorescent proteins, where fluorogens confer FL to structurally diverse RNAs, have been reported in recent reviews [20,21]. These are termed fluorescent light-up aptamers (FLAPs) or fluorogen-activating aptamers. Similar to genetically encoded fluorescent proteins enabling the spatial and temporal monitoring of various target proteins in living cells, FLAP reporters have emerged as an innovative tool for endogenous RNAs or metabolites in molecular imaging and biosensing [78]. Recently, this protein-independent RNA reporter system has been employed for transgene identification in plants [79]. A key feature is the formation of highly stable complexes between the fluorogen and aptamer, which can be represented by the dissociation constant (Kd). Unlike other fluorogenic aptasensors as mentioned above, these FLAPs enabled the real-time monitoring of FLAP-tagged RNAs or metabolites without the need for chemical labeling with fluorophores or quenchers. Once the RNA aptamers recognize their cognate fluorogens that are minimally fluorescent, their FL intensities are dramatically enhanced by many orders of magnitude in living cells [80]. In addition to the detailed transcriptional studies by FLAPs, we focus on the examples and advances of FLAP reporters for imaging RNAs or small molecules (especially metabolites) in living cells as molecular targets. As a target molecule, RNA belongs to macromolecules, not small molecules, but is included in part in this section because RNAs and small molecule-binding RNA aptamers have been studied simultaneously for imaging in most studies. The detection principles are illustrated in Figure 3 and the FLAP reporters for this purpose are listed in Table 1. 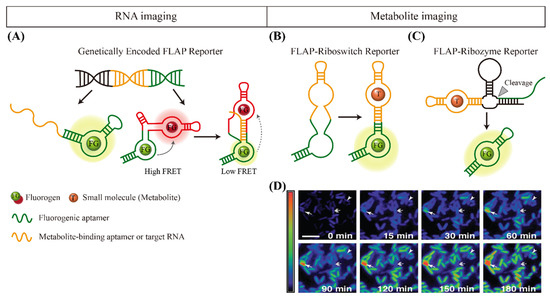 We summarized the recent advances in fluorogenic aptasensors with their distinct functional strategies and wide range of applications to small molecules, followed by a comparison with conventional methods. Different types of fluorogenic aptamers have been demonstrated with a look at the trend of improvement in the field of biosensor and bioimaging. Aptamers are generally discovered by SELEX and modified with other nucleic acids or various nanomaterials as bioreceptors or therapeutic modulators [99], while fluorogenic aptasensors, aptazymes, or FLAP reporters have emerged as new tools to overcome traditional limits, such as low sensitivity, complicated sensing processes, and poor dynamic resolution. They depend on the structural change of the aptamer-fluorogen complex, thus enabling a better signal-to-background ratio and faster activation than other fluorescent aptasensors. Most importantly, because DNA or RNA aptamers selectively bind to a wide spectrum of small molecules, including ions, cofactors, metabolites, nucleosides, carbohydrates, small peptides, and large proteins, multiple studies are required to replace existing methods. However, apart from the significant progress in fluorogenic aptamers, some challenges remain in designing aptamers, developing sensors, and diagnosing small molecules, especially in real biological samples or living organisms, because aptamers have been selected from the artificial environment. In fact, most of the reported aptasensors are likely to be significantly influenced when applied to real samples. An appropriate pretreatment step or a special strategy for homogeneous analysis is required to overcome this limitation. In addition, in the case of riboswitch or ribozyme-based sensors, attention should be paid to some points in live cells. For example, it should not interfere with inherent genetic control systems when integrating self-splicing or self-cleaving constructs into mRNAs or when introducing small fluorophore into live cells. Elaborate research in the precise and efficient engineering of aptamers in a highly orchestrated fashion will lead this method to a useful monitoring system in live cells. Furthermore, of particular interest will be how these fluorogenic aptasensors can be installed in practical or basic research, such as pandemic virus detection, metabolic or signaling control, or studies on nucleic acid modifications or degradation. By engineering sequences, structures, and/or targeting ability of aptamers or combining current strategies, future efforts will promote more advanced studies in biotechnology and biomedicine.

This work was supported by the National Research Foundation (NRF) grant funded by the Korean government (MSIT) (No.2016M3A9B4918833), the KIST Institutional Program (Project No. 2Z06270-20-137), and the Korea Environment Industry & Technology Institute (KEITI) through the Aquatic Ecosystem Conservation Research Program, funded by the Korea Ministry of Environment (MOE) (No. 2020003030007). This work was also supported by the Basic Science Research Program (No. 2012R1A6A1029029 and 2020R1A6A1A06046728) through the NRF funded by the Ministry of Education, Korea. 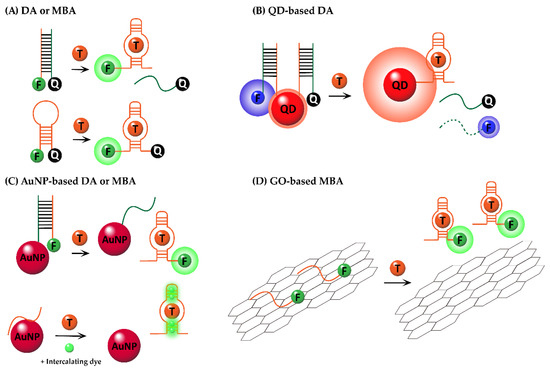