Coupled Multiphysics Modelling of Sensors for Chemical, Biomedical, and Environmental Applications with Focus on Smart Materials and Low-Dimensional Nanostructures

Thin copper selenide films were synthesized on polyamide sheets using the successive ionic layer adsorption and reaction (SILAR) method at three different temperatures. It was found that elevating the temperature of the solution led to the creation of copper selenide films with different features. X-ray diffraction characterization revealed that all films crystallized into a cubic Cu2−xSe, but with different crystallinity parameters. With elevating the temperature, grain size increased (6.61–14.33 and 15.81 for 40, 60 and 80 °C, respectively), while dislocation density and the strain decreased. Surface topology was investigated with Scanning Electron Microscopy and Atomic Force Microscopy, which revealed that the grains combined into agglomerates of up to 100 nm (80 °C) to 1 μm (40 °C). The value of the direct band gap of the copper selenide thin films, obtained with UV/VIS spectroscopy, varied in the range of 2.28–1.98 eV. The formation of Cu2−xSe was confirmed by Raman analysis; the most prominent Raman peak is located at 260 cm−1, which is attributed to binary copper selenides. The thin Cu2−xSe films deposited on polyamide showed p-type conductivity, and the electrical resistivity varied in the range of 20–50 Ω. Our results suggest that elevated temperatures prevent large agglomeration, leading to higher resistance behavior. View Full-Text
Keywords: copper selenide; polyamide; SILAR method copper selenide; polyamide; SILAR method
►▼ Show Figures 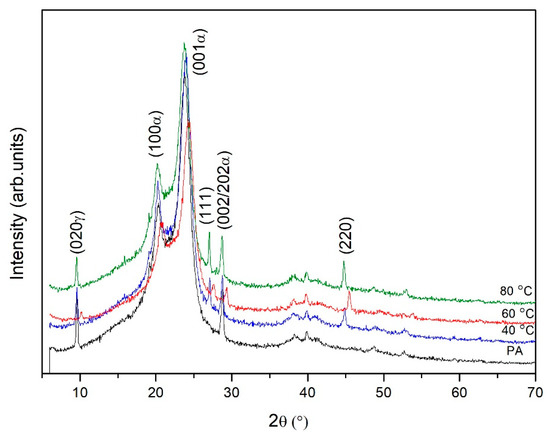