Sarcopenia is caused by the interaction of a variety of factors and pathways, such as environmental factors, endocrine dysregulation, loss of motor neurons, activation of inflammatory pathways, and reduced satellite cell counts [1]. Inflammatory markers are involved in age-related loss of muscle mass. Elevated TNF-α levels increase the anabolic effects on muscles by inhibiting the rapamycin signaling, and inflammatory cytokines have an antagonistic effect on muscle synthesis by diminishing circulating and muscular insulin growth factor (IGF)-1 levels [2]. Interleukin (IL)-10 concentration in the blood is known to inhibit tumor necrosis factor (TNF)-α, and increases in cytokine levels as a result of aging are believed to be closely associated with sarcopenia [3]. Myostatin (Mstn), an extracellular cytokine, is a transforming growth factor (TGF) that hinders the regulation of skeletal muscle mass and growth. Mstn is exclusively expressed in skeletal muscles, where it inhibits the differentiation and proliferation of myoblasts through an antagonistic effect on IGF-1 or follistatin [4]. In addition, Mstn is associated with aging. Yarasheski et al. [5] reported that physically frail elderly women showed the highest elevation of serum Mstn levels and that elevation of Mstn levels is negatively correlated with skeletal muscle mass; however, aging-related changes in circulating or muscle Mstn-immunoreactive protein levels or Mstn mRNA have not been proven [6]. Further research is needed to address the contradictory results pertaining to the relationship between Mstn and aging.
Irisin, a myokine associated with increased muscle mass, is significantly and positively correlated with skeletal muscle mass and strength; therefore, it has been proposed as a potential biomarker of sarcopenia and muscular impairment [7]. Regular exercise has been reported to increase irisin levels and inhibit Mstn, which hinders muscle growth [8]. Ultimately, achieving sufficient muscle mass is important to increase muscle strength, as muscle mass and strength are positively correlated [9].
Studies on the effects of exercise on increasing muscle mass have reported that aerobic exercise facilitates skeletal muscle growth as well as mitochondrial ATP production and improves aerobic capacity, metabolic regulation, and cardiovascular functions [10]. In other words, aerobic exercise restores mitochondrial metabolism, reduces the expression of catabolic genes, and increases muscle protein synthesis [10,11,12]. In addition, exercise is helpful in maintaining the expression of autophagy proteins and may also upregulate the expression of autophagy-related proteins in skeletal muscle [13]. Furthermore, aerobic exercise has been proposed to regulate Mtsn mRNA expression [14].
In the elderly, strength training stimulates growth hormone secretion that promotes muscle cell growth and muscle strength [15]. Strength training also contributes to an increase in bone density [16]. In particular, resistance exercise can restore a significant portion of lost muscle function and delay deterioration of muscle structure associated with aging [17]. In addition, the cross-sectional area of the muscles of the elderly who perform resistance exercise has been reported to increase similarly to that of younger individuals [18].
Osteoarthritis (OA) accompanied by sarcopenia is a chronic disease in which gradual deterioration of joint cartilage causes subchondral damage and secondarily induces inflammation in other tissues, and ultimately impairs physical functioning [19].
Previous studies have shown that aging-induced sarcopenia is closely associated with OA [20,21]. The classic feature of OA is pathological inflammation, and cytokines, such as TNF-α and IL-6, play an important role in the destruction of cartilage [22]. Therefore, reducing TNF-α levels is crucial in treating chronic pain caused by OA.
Prolonged drug therapy to treat inflammation may likely lead to adverse reactions, such as infection, autoimmune diseases, and tumors [23]. However, exercise increases the secretion of the anti-inflammatory cytokine IL-10 and inhibits the production of proinflammatory cytokines, such as TNF-α, without any adverse reactions [24].
Because cytokines characteristically expressed in sarcopenia may induce OA, it has been suggested that exercise may have protective effects on muscles. Resistance exercise, a classic exercise for OA, is an important intervention used to inhibit muscle loss by facilitating muscle protein synthesis and muscle growth. Regular resistance exercise enhances exercise performance by enlarging muscle fibers and increasing cross-sectional surface area, however it has been reported that there are limitations in promoting mitochondrial protein expression and improving functioning with resistance exercise alone in elderly individuals with sarcopenia [25]. Furthermore, simple resistance exercise may be less effective in older adults because of low levels of mammalian target of rapamycin (mTOR) signaling, which is involved in muscle protein synthesis [26].
Therefore, a single form of exercise is not an optimal therapeutic exercise intervention for aging-related sarcopenia. A balanced combined exercise program including both aerobic and resistance exercises should be recommended to improve aging-induced sarcopenia [27].
Therefore, this study aimed to investigate the therapeutic effects of a combined exercise program on sarcopenia and OA by analyzing its anabolic effects on muscles and activities of daily living (ADL).

Elderly women aged ≥60 years who resided in Asan-si were enrolled; of these, 19 women had sarcopenia, defined by muscle strength ≤20 kg based on grip strength [28]. The participants were divided into the no OA group (SEG, n = 9) and a group diagnosed with OA (Kellgren-Lawrence Grade I or II) by an orthopedic surgeon (OSEG, n = 10). We excluded those with a history of musculoskeletal injury in the past 6 months, history of knee surgery or intra-articular steroid administration, and inability to ambulate independently. Before enrollment, subjects confirmed understanding of the purpose of the study and indicated willingness to participate, after being informed of the experimental procedures in detail. This study was approved by the institutional review board of Sunmoon University (SM-201908-045-1). The participants’ physical characteristics are shown in Table 1.

The experimental procedure of this study is shown in Figure 1.

2.3. Measurement of Cross-Sectional Area of the Thigh

The anatomical cross-sectional area (CSA) of the quadriceps muscle was assessed by computed tomography (CT) scanning (Siemens, Munich, Germany), as described previously [29]. With the subject in the supine position, the right mid-thigh CSA was measured by CT at the midpoint from the inguinal crease to the proximal pole of the patella (Figure 2). Briefly, the scanning characteristics were as follows: 120 kV, 300 mA, rotation time of 0.75 s, and field of view of 500 mm. With the subjects lying supine, legs extended, and their feet secured, a 3-mm-thick axial image was taken 15-cm proximal to the base of the patella. The muscle area of the right leg was selected between 0 and 100 Hounsfield units [30], after which the quadriceps muscle was manually traced using ImageJ software (version 1.45 d; National Institutes of Health, Bethesda, MD, USA) [31].

Blood samples were collected by a medical doctor from each participant after 12 h of fasting. The samples (10 mL) were centrifuged (1000× g, 4 °C, 15 min) and the serum was aliquoted and stored at −80 °C for subsequent analysis. For the analysis of serum IGF-1, Mstn, TNF-α, and IL-10, 50-, 50-, 50-, and 200-μL of serum samples were analyzed using commercial enzyme-linked immunosorbent assay (ELISA) kits (R&D Systems, Minneapolis, MN, USA). The lower limits of detection were 0.094 ng/mL, 31.3 pg/mL, 15.6 pg/mL, and 7.8 pg/mL, respectively. Irisin (in a 100-μL of serum sample) was analyzed using a commercial kit (Aviscera Bioscience Inc., Santa Clara, CA, USA), with a lower limit of detection of 0.8 mL. All factors were measured using an ELISA reader (Benchmark Plus Microplate Spectrophotometer, Bio-Rad Hercules, CA, USA) at 450 nm. Values below this limit were assumed to be zero for the statistical analysis. The inter- and intra-assay coefficients of variance were <10%.

The mean and standard deviation (SD) of each study parameter were computed using IBM SPSS Statistics version 26 (IBM Corp., Armonk, NY, USA). The group and interaction effects for each variable were analyzed using two-way repeated measures ANOVA. Unpaired t-tests were performed as post-hoc analysis for differences between groups, and paired t-tests were performed for differences between time points. The statistical significance (α) was set at 0.05.

The study was conducted according to the guidelines of the Declaration of Helsinki, and approved by the Institutional Review Board of Sunmoon University (SM-201908-045-1 and 4 October 2019).

The data presented in this study are available on request from the corresponding author. The data are not publicly available due to privacy. 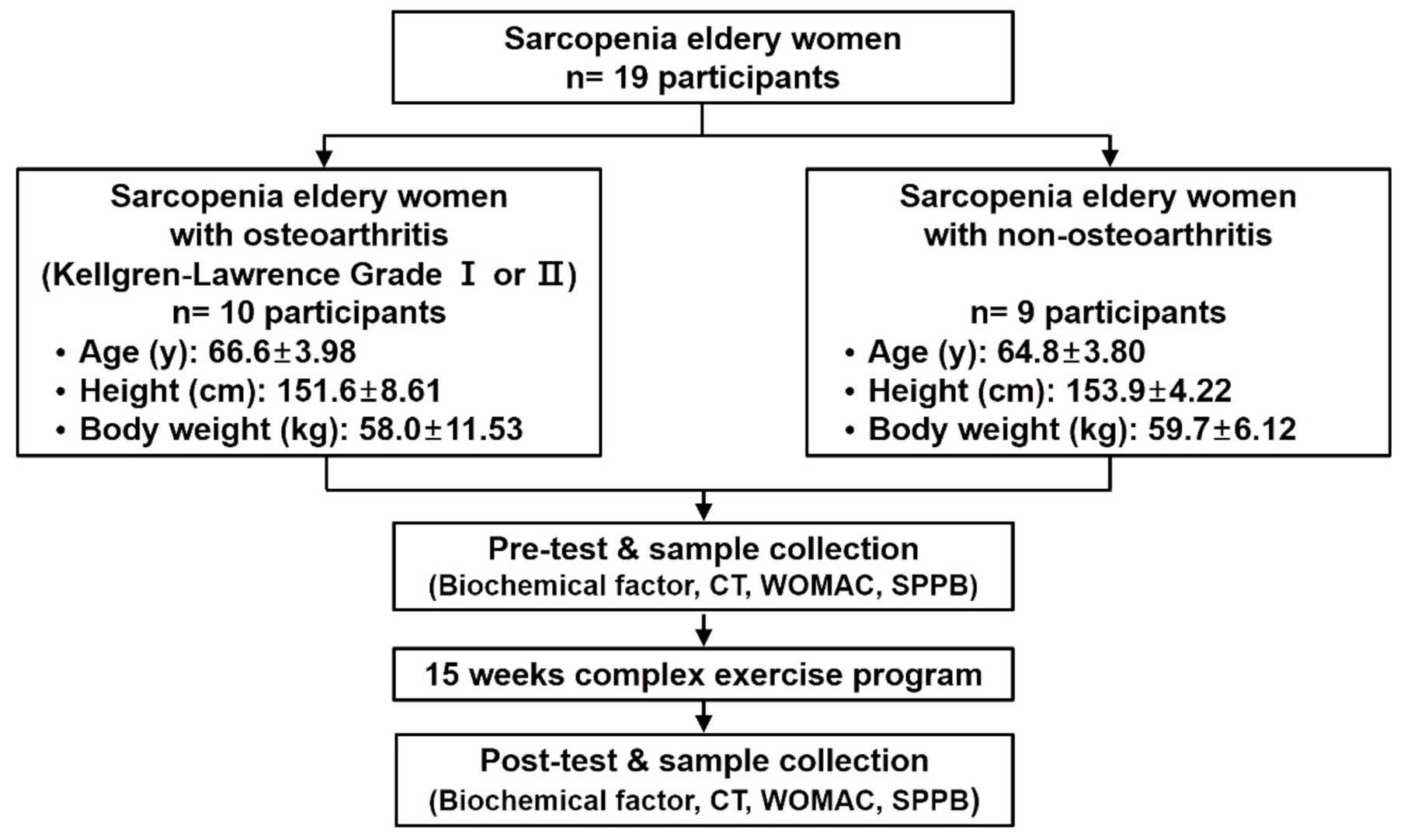 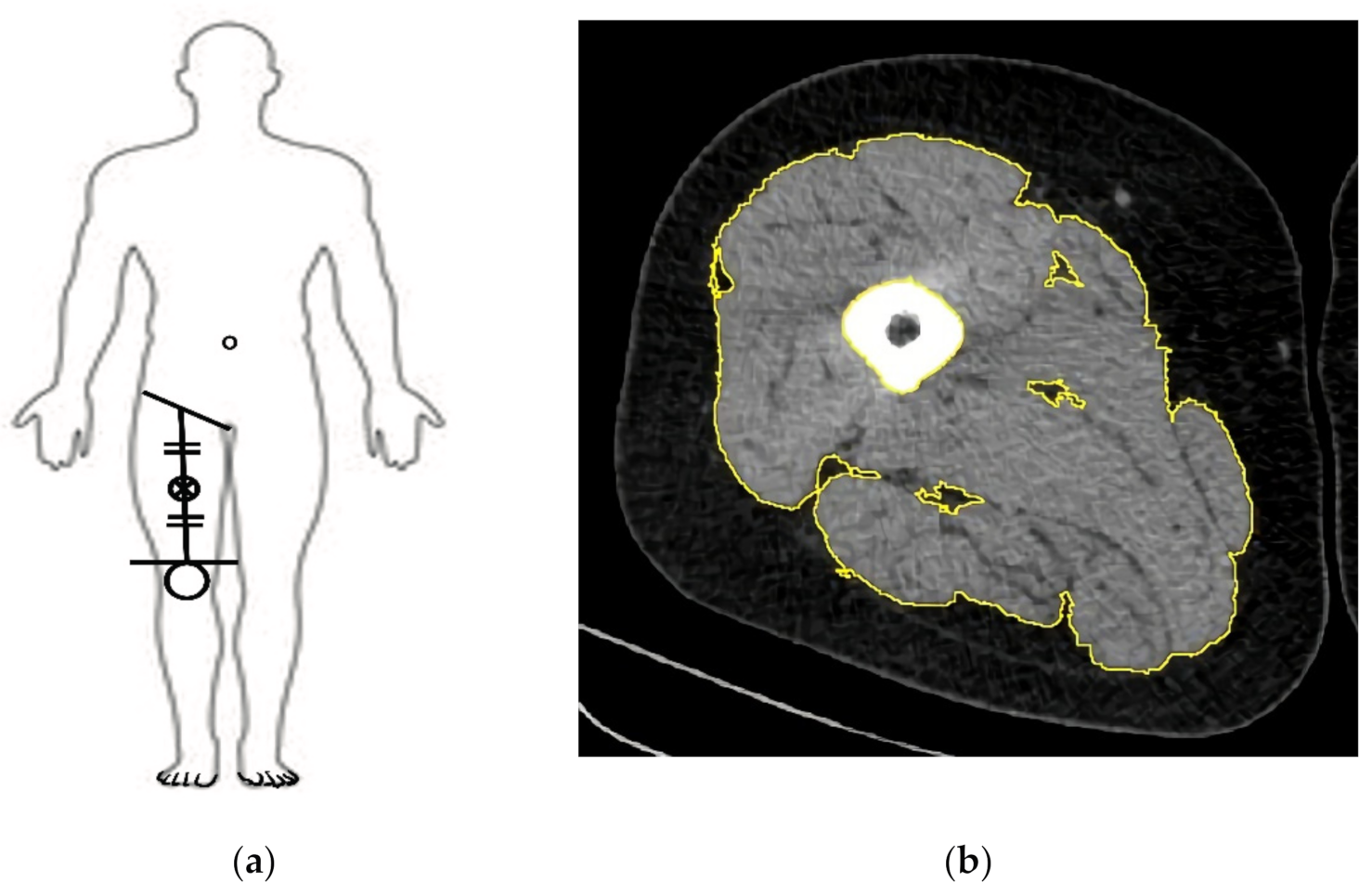