Emergency calls may lead to the dispatch of either ground ambulances or helicopter emergency medical services (HEMS). For residents on isolated islands, the HEMS can reduce the time to hospital admission and lead to improved outcomes. This study investigated the emergency care for residents on isolated islands with a focus on the role of a physician-staffed helicopter. The data were obtained from Danish national registries and databases. We included data on emergency calls from isolated islands from the time of emergency call to discharge. We identified 1130 emergency calls from which 775 patients were registered with a hospital admission. Of these, 41% were transported by the HEMS and 36% by a ground ambulance. The median time to admission was 83 min (IQR 66–104) and 90 min (IQR 45–144) for the HEMS and ground ambulance, respectively (p = 0.26). The overall 30-day mortality was 6.2% (95% CI: 4.6–8.1%), and 37% of all the patients were admitted to the hospital with an unspecified diagnosis. The emergency calls from isolated islands led to the dispatch of the HEMS in 41% of the cases. The use of the HEMS did not significantly reduce the time to admission but was used in a greater proportion of patients with an acute cardiac disease (66%) or stroke (67%).
Keywords: physician-staffed helicopter; HEMS; air ambulance; emergency care physician-staffed helicopter; HEMS; air ambulance; emergency care

The expert prehospital care and fast admission to the hospital can be important for patients with acute illness or injury. The emergency medical dispatch centers (EMDC) dispatch appropriate resources from the emergency medical service (EMS), such as a ground ambulance or a helicopter emergency medical service (HEMS), that may provide rapid retrieval with expert prehospital care depending on the staffing [1,2,3,4].
For patients in rural areas, including islands, which cannot be reached by road, the prolonged time of transport to the hospital may justify the more frequent use of emergency aeromedical care when time is an important factor [5,6,7,8,9,10].
The primary aim of this study was to describe the emergency care for residents on the isolated Danish islands. Secondly, we aimed to assess the role of a physician-staffed helicopter in time-critical conditions, time from dispatch to hospital admission, and outcome for these patients.

This was a retrospective observational study based on data from 1 October 2014 until 31 March 2016.
We analysed data obtained from the five Danish regions’ (Capital Region of Denmark, Region Zealand, Region of Southern Denmark, Central Denmark Region, Region of Northern Denmark) EMDCs. From the electronic logs of the EMDC, we identified emergency calls from a predefined list of 48 Danish islands based on address and postal code.
Data regarding HEMS missions were retrieved from the database HEMS file [11]. Finally, we obtained data from the Danish National Patient Registry (NPR) and the Civil Person Registry on the patients we identified from the EMDCs. Data were merged using the patients’ Civil Person Registration (CPR) number, as well as the date of emergency call (+1 day to account for inaccuracies in registration). The CPR-number is a unique identifier assigned to all Danish residents [12]. It was not possible to retrieve data on patients with invalid or missing CPR numbers. Diagnoses were categorized in groups based on definitions according to the ICD-10 (International Classification of Diseases) diagnosis codes. Unspecified diagnoses were conditions that did not fit into any overall groups.

The EMDCs are responsible for dispatching the appropriate resource with the right level of urgency. The appropriate resource for transportation from the scene to hospital may either be a ground ambulance or the HEMS. Ground ambulances are staffed with emergency medical technicians or paramedics and can be supplemented by a consultant anaesthesiologist in severe cases. The HEMS are staffed with a consultant anaesthesiologist, a paramedic, and a pilot, and are functioning 24 h every day of the year. The national HEMS organization was introduced on the 1 October 2014 and had three identical helicopters at the time of our study, each with its own base in Denmark. This enables the physician-staffed helicopter to reach the geographically remote parts of the country within 30 min. The HEMS are dispatched based on a range of nation-wide criteria for immediate dispatch, which are as follows: if the patient is suspected to suffer from a time-critical condition or a severe injury; by request of an ambulance crew; inter-hospital transfers; and patients located on the isolated Danish islands.

Data obtained from the five EMDCs and HEMSfile were collected for each region and integrated in an Excel spreadsheet. Further descriptive statistics were performed in a licensed RStudio Version 1.3.1073 (RStudio Team (2020). RStudio: Integrated Development for R. RStudio, PBC, Boston, MA, USA).
Continuous variables were reported as medians with the interquartile range between the 1st and 3rd quartile, and groups were compared using Mann-Whitney U’s test. Categorical variables were reported using numbers and percentages with 95% confidence interval (CI) and compared with Fisher’s exact test. p < 0.05 was considered statistically significant.

In conclusion, we found that there was an approximately equal use of the HEMS and ground ambulance in the overall transport of patients from isolated Danish islands to the hospital, as well as no difference in the median transport time. The HEMS transported more patients with suspected stroke or cardiac disease.

The execution of this study was funded by the Danish National Air Ambulance Organization.

The data that support the findings of this study are available from The Danish Health Data Authority in the following databases: The National Patient Registry and The Civil Patient Registration, but restrictions apply to the availability of these data, which were used under license for the current study and are not publicly available.

The authors declare that they have no competing interests in this section. 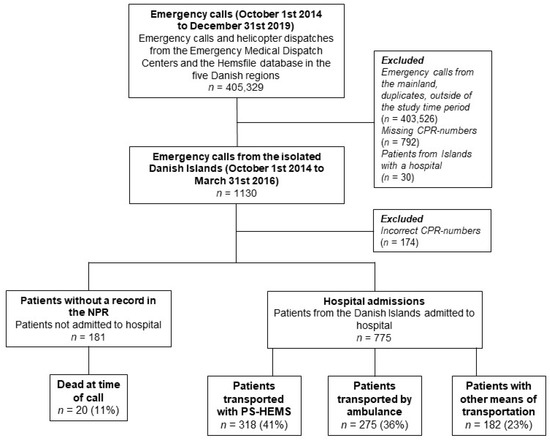 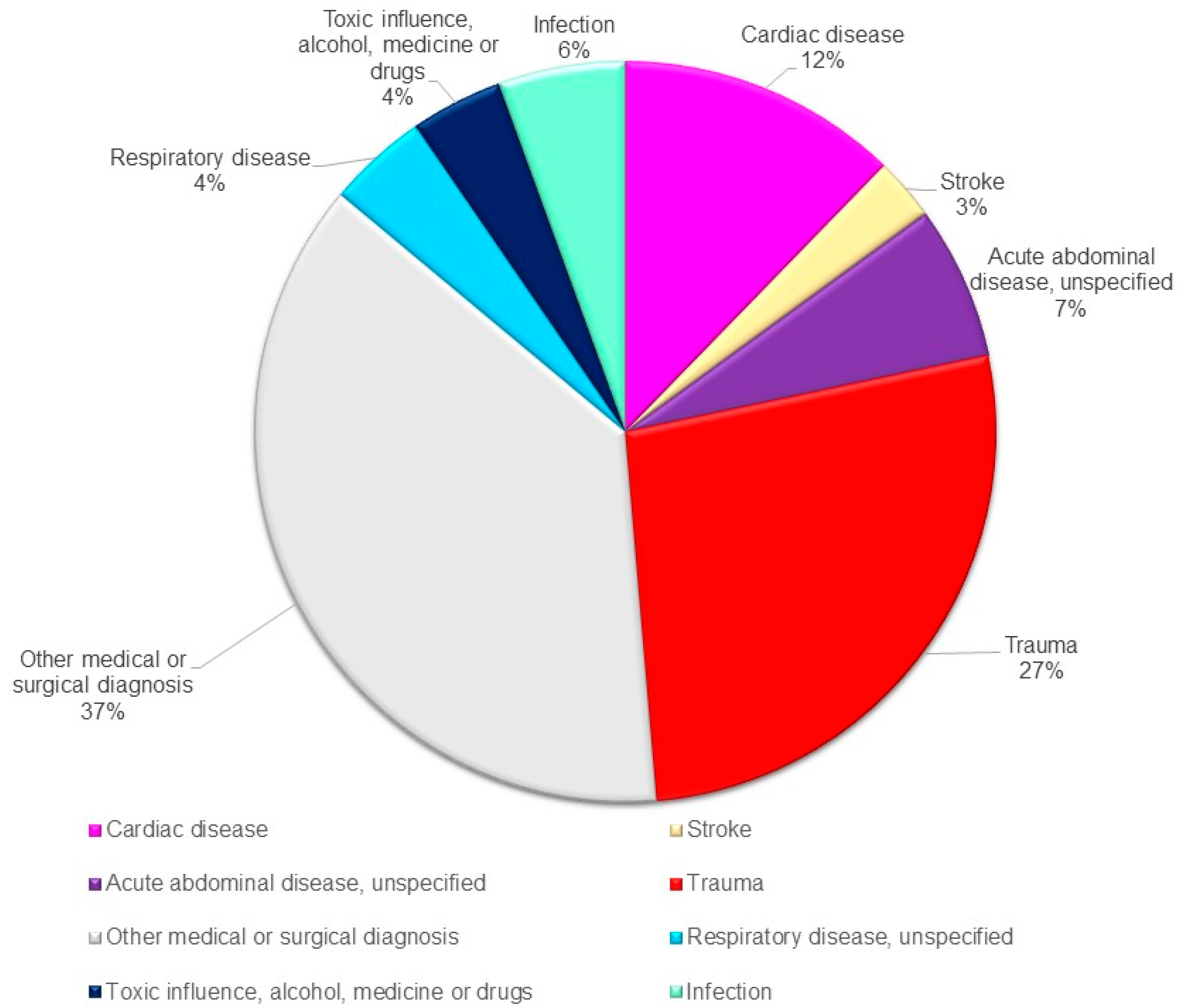