Gluten Free Diet for the Management of Non Celiac Diseases: The Two Sides of the Coin

Chemotherapy for acute lymphoblastic leukemia (ALL) patients is complex and intense, resulting in a high readmission rate. We aimed to identify the incidence, causes, and risk factors of readmission following inpatient chemotherapy among ALL patients, using 2016 National Readmission Database. We applied three different definitions of 30-day readmission: (1) nonelective readmission based on readmission type, (2) unplanned readmission defined by CMS, and (3) unintentional readmission, combining (1) and (2). We used unweighted multivariable Poisson regression with robust variance estimates for risk factors analysis, including patient-, hospital-, and admission-related characteristics. Percentage for nonelective, unplanned, and unintentional readmission were 33.3%, 22.4%, and 18.5%, respectively. The top three causes for unplanned readmissions were neutropenia/agranulocytosis (27.8%), septicemia (15.3%), and pancytopenia (11.5%). Risk ratios for unintentional readmission were 1.21 (1.08–1.36) for nonelective vs. elective admission, 1.19 (1.06–1.33) for public vs. private insurance enrollees, 0.96 (0.95–0.98) for each day of hospital stay, 0.77 (0.62–0.95) for large teaching and 0.87 (0.70–1.08) for small teaching vs. nonteaching hospitals. Possible strategies to reduce readmission among ALL patients could be shortening the gap in quality of care among teaching vs. non-teaching hospitals, understanding the difference between privately vs. publicly insured patients, and avoiding aggressive discharge after chemotherapy.
Keywords: acute lymphoblastic leukemia (ALL); acute lymphocytic leukemia; readmission; risk factors; quality of care; chemotherapy acute lymphoblastic leukemia (ALL); acute lymphocytic leukemia; readmission; risk factors; quality of care; chemotherapy

Acute lymphoblastic leukemia (ALL) is a type of cancer that progresses rapidly by creating malignant white blood cells that disrupt normal blood cell production and functionality [1,2]. Based on Surveillance, Epidemiology, and End Results (SEER) data, an estimated 5930 patients were diagnosed with ALL in 2019 and the 5-year survival rate was approximately 68.6% [3]. ALL treatment is considered one of the most complex and intensive regimens in cancer therapy and generally includes five phases: induction, consolidation, interim maintenance, delayed intensification, and maintenance [4,5]. Patients may be hospitalized due to immunodeficiency, disease progression, intensive chemotherapy, or adverse effects from treatment [6].
The 30-day readmission is a popular well-accepted measurement for the quality of acute care. Readmission beyond this period is less likely due to the quality of inpatient care and rather due to patients’ behavior, disease progression, or medical care after discharge [7,8,9]. To reduce healthcare costs while providing high-quality services for patients, the Center for Medicare and Medicaid Services (CMS) uses the payment penalty for unplanned readmission and proposes penalties for unplanned hospitalization after chemotherapy. Though the ALL population is excluded from a proposed payment penalty for admission due to chemotherapy, attention should still be paid to care quality improvement in this population.
Literature regarding readmission typically uses the CMS definition of unplanned readmission, which is not applied for children with cancer. All readmissions are considered unplanned except admission for disease progression and continuation of therapy [7,8,9]. Most researchers use the CMS algorithm to define readmission. However, an emerging number of publications use the elective variable in the National Readmission Database (NRD) [10,11,12,13], leading to the concern that differing definitions generate different results and interpretations. The elective variable in NRD is defined based on readmission types reported by hospitals as either elective or non-elective (i.e., emergency or urgent).
We aimed to study the ALL national incidence, and risk factors for 30-day readmission after inpatient chemotherapy and compared three definitions, including unplanned, non-elective, and unintentional for readmission. We hypothesized that relapsed patients and patients with a longer length of stay during the index admission would be more likely to be readmitted due to disease or treatment complications. Furthermore, we hypothesized that patients treated at the teaching hospitals or high-volume hospitals would be less likely to have readmissions due to better quality of care. Lastly, a patient admitted to a hospital with an urgent or emergent index admission type would have a higher risk for readmission.

Our study was conducted using the NRD in 2016, which is the most up to date data we own to provide implications of the current clinical practice. NRD 2016 represents discharge data from 27 states, accounting for approximately 57% of all U.S. hospitalizations [14]. The data includes patients with all types of insurance and the uninsured.
NRD data are publicly available de-identified data accessed via a Data Use Agreement from the Agency for Healthcare Research and Quality.

This was a retrospective study of children and adults with ALL. We used primary and secondary International Classification of Diseases, 10th Revision, Clinical Modification (ICD-10-CM) diagnosis codes to identify patients with ALL (C91.0*). We further classified ALL states as not having achieved remission (C91.00), in remission (C91.01) or relapse (C91.02). Further, patients were required to have a primary diagnosis of an encounter for chemotherapy (Z51.11) to enter the cohort (index day). After discharge, patients were followed until readmitted or until 30 days since their index admission, whichever came first. Patients discharged in December were excluded because they did not have 30-day follow-up data to assess readmission. Patients who died or transferred to other hospitals or long-term care institutions during their index admission did not enter the study as they were no longer at risk for readmission or their readmission could not be captured. We did not include children with Down syndrome because they are often kept long-term in the hospital during their treatment to keep them from dying due to infection or adverse events. Patients with more than 30 days of hospital stay were excluded as this length of stay is unusual for the population. Patients having an elective admission resulting from an emergency visit were excluded because their reason for admission is not likely for chemotherapy. We also excluded patients one year of age or younger due to data quality and this age group patients often stay in the hospital entirely for the induction period. Because NRD does not link data across states, admissions of non-residents were also excluded. Due to a small number of records with missing expected payers, APRDRG severity, admission type, or length of stay, we omitted these missing records. Small numbers of admissions were in a micropolitan area and had minor or not classified APRDRG severity to examine their effect sizes. We, therefore, excluded them from our analysis (Figure 1). Patients could re-enter the cohort when a new admission met the inclusion and exclusion criteria.

The exposure was an inpatient encounter for chemotherapy.

The outcome was the first readmission within 30 days from the discharge of the index admission. We used three different definitions for the outcome.
Definition 1.
A nonelective readmission was defined based on admission type (elective variable = 0) reported by hospitals in the NRD. Elective admission means the patients’ condition allowed adequate time to schedule the availability of a suitable accommodation [15]. Nonelective admission includes other admission types, such as emergency (i.e., required immediate medical intervention as a result of severe, life-threatening, or potentially disabling conditions), or urgent (required immediate attention for the care and treatment of a physical or mental disorder).
Definition 2.
An unplanned readmission was based on the algorithm developed by CMS [9,16]. Though the CMS uses the definition for adult cancer patients only, we also considered this measure for children with ALL. The CMS defines unplanned readmission as a subsequent inpatient admission occurring within 30 days of the discharge date of the index hospitalization. The readmission due to disease progression (e.g., principal diagnosis of metastatic disease) or admission for treatment (e.g., principal diagnosis of chemotherapy or radiation therapy) is not counted as readmission [16]. This definition does not include nonacute readmission in which one of 32 typically planned procedures is performed.
Definition 3.
An unintentional readmission was the combination of the two previous outcome measures.

Key covariables include age, sex, disease status, length of stay, expected payers, and hospital characteristics, such as teaching status and case volume. We categorized age into 4 categories: age 2 to ≤10; 11 to ≤18; 19 to ≤40 and >40 based on the intensity of treatment regimens for these age groups and the survival disadvantage in patients diagnosed at their 19 to ≤40 ages [17,18]. A daily charge (per 1000 USD) variable was calculated by the formula (total charge/length of stay) × 1000. Case volume was calculated as the number of ALL admissions in each hospital in 2016 (except December) and was further broken down by quintiles. We created a new variable—metropolitan hospital by combining the teaching status variable and hospital designation variable in the NRD. For severity, we used variable APR-DRGs (ALL patients refined diagnosis-related groups), which were classified as moderate, major, or extreme loss of functions based on the base APR-DRG, the severity of illness subclass, and the risk of mortality subclass. Details can be found at [19].

The national estimate of the 30-day readmission incidence was weighted using the proc survey procedure. As missing data was minimal, we assumed that missing data occurred completely at random and excluded them from the analysis, except the total charge missing value was imputed by the median value.
To form Table 1 and Supplementary Materials Table S1 (Supplementary Materials Digital Content 1) of patient characteristics at index admission by disease status and type of admission, we used a simple frequency for binary or categorical variables and median and interquartile range (IQR) for continuous variables without weighting using ggBaseline macro [20]. Because 30-day readmission is prevalent (>10%) among the cancer population, multivariate Poisson regression with a robust variance estimate, instead of logistic regression, was used to estimate the relative risk and confidence interval [21].
Causes of readmission were classified by Clinical Classifications Software Refined (CCSR) (Healthcare Cost and utilization project—Agency for Healthcare Research and Quality, Rockville, Maryland USA) for ICD-10-CM based on the primary diagnosis code. When the primary diagnosis code was less specific and not classifiable (e.g., encounter for leukemia), we further looked at the secondary diagnosis code.
To analyze risk factors, we decided the best model was that with the most stringent criteria (unintentional readmission definition). A strict outcome measure with high specificity will provide less bias while less stringent measures with low specificity may create a bias toward the null [22]. Stratified analyses of unintentional readmission were conducted for disease status.
The analysis was conducted using SAS 9.4 (SAS Institute, Cary, NC, USA).

The top three reasons for readmission included neutropenia/agranulocytosis, septicemia, and pancytopenia, which may be reduced by efficient use of prophylactic and preventative strategies (e.g., against febrile neutropenia) and infection control protocols. Risk factors for readmission vary based on outcome definitions. Using the most stringent definition, opportunities exist to reduce readmission among ALL patients. Possible strategies to reduce readmission among ALL patients could be shortening the gap in the quality of care among teaching and nonteaching hospitals (e.g., effective and timely treatment during an emergency visit, which avoids readmissions), understanding the difference of privately vs. publicly insured patients (e.g., equitable treatment), and avoiding aggressive discharge of ALL patients after chemotherapy (e.g., safety treatment). 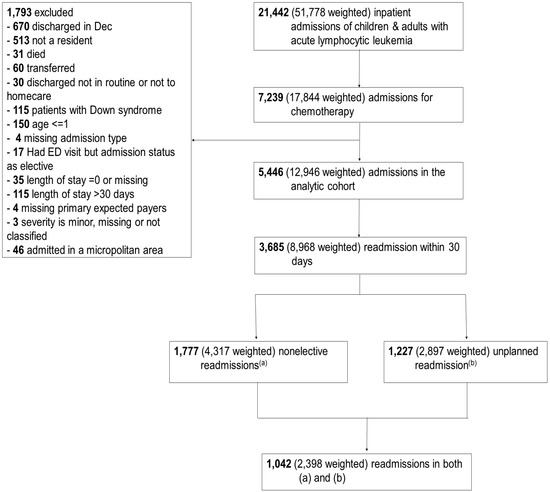 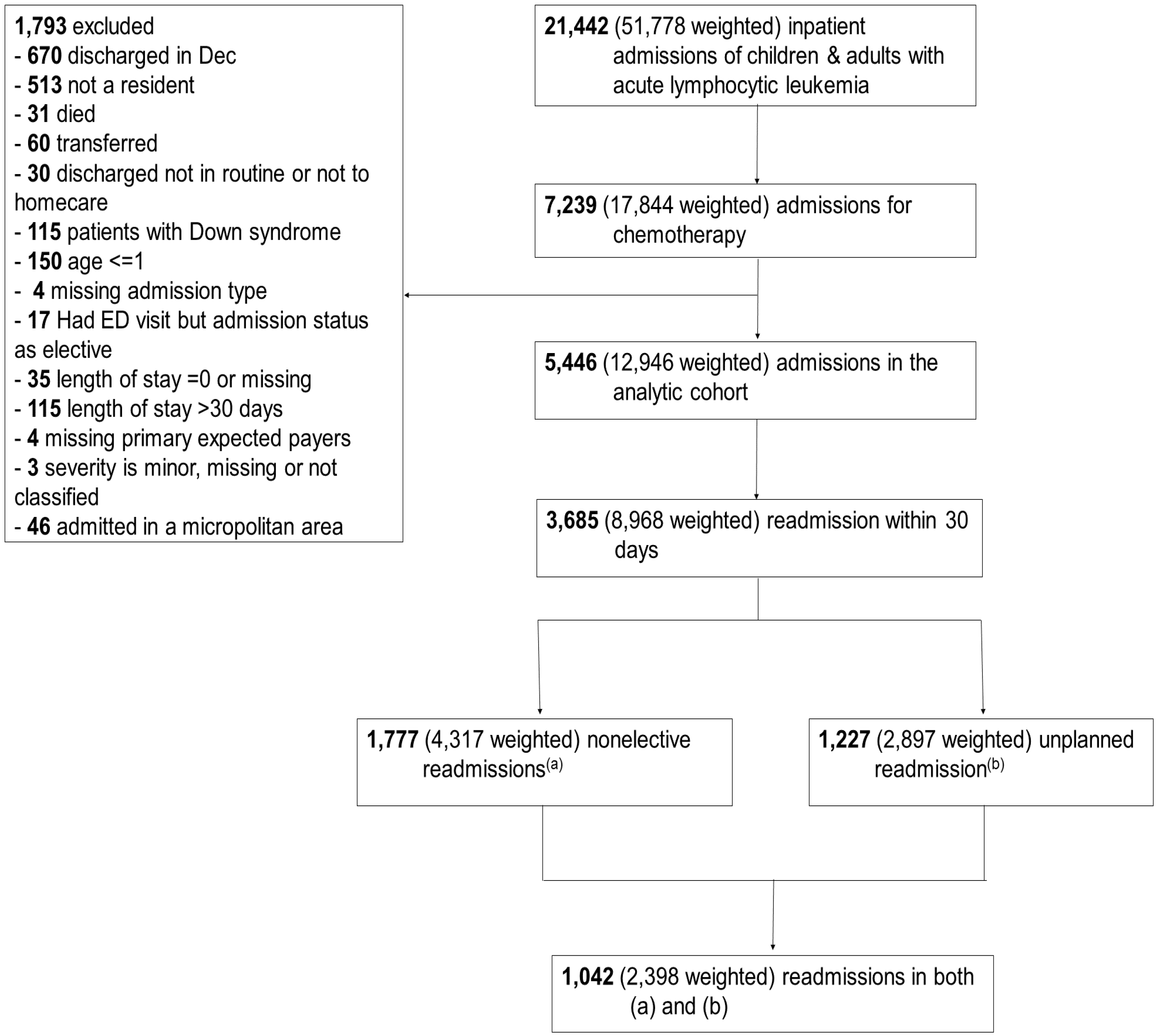