Healthcare Received in the Last Months of Life in Portugal: A Systematic Review

Survival functions are often characterized by a median survival time or a 5-year survival. Whether or not such representation is sufficient depends on tumour development. Different tumour stages have different mean survival times after therapy. The validity of an exponential decay and the origins of deviations are substantiated. The paper shows, that representation of survival data as logarithmic functions visualizes differences better, which allows for differentiating short- and long-term dynamic lifetime. It is more instructive to represent the changing lifetime expectancy for an individual who has survived a certain time, which can be significantly different from the initial expectation just after treatment. Survival data from 15 publications on cancer are compared and re-analysed based on the well-established: (i) exponential decay (ii) piecewise constant hazard (iii) Weibull model and our proposed parametric survival models, (iv) the two-τ and (v) the sliding-τ model. The new models describe either accelerated aging or filtering out of defects with numerical parameters with a physical meaning and add information to the usually provided log-rank P-value or median survival. The statistical inhomogeneity in a group by mixing up different tumour stages, metastases and treatments is the main origin for deviations from the exponential decay. View Full-Text
Keywords: parametric survival model; hazard rate; dynamic lifetime; cancer survival data; statistical distributions parametric survival model; hazard rate; dynamic lifetime; cancer survival data; statistical distributions
►▼ Show Figures 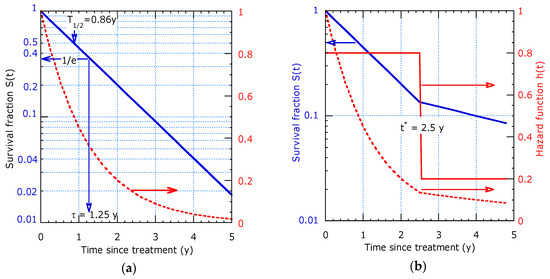