Lyme disease, caused by the spirochetal bacterium, Borrelia burgdorferi sensu lato (Bbsl), is typically transmitted by hard-bodied ticks (Acari: Ixodidae). Whenever this tick-borne zoonosis is mentioned in medical clinics and emergency rooms, it sparks a firestorm of controversy. Denial often sets in, and healthcare practitioners dismiss the fact that this pathogenic spirochetosis is present in their area. For distribution of Bbsl across Canada, we conducted a 4-year, tick–host study (2013–2016), and collected ticks from avian and mammalian hosts from Atlantic Canada to the West Coast. Overall, 1265 ticks representing 27 tick species belonging to four genera were collected. Of the 18 tick species tested, 15 species (83%) were positive for Bbsl and, of these infected ticks, 6 species bite humans. Overall, 13 of 18 tick species tested are human-biting ticks. Our data suggest that a 6-tick, enzootic maintenance cycle of Bbsl is present in southwestern B.C., and five of these tick species bite humans. Biogeographically, the groundhog tick, Ixodes cookei, has extended its home range from central and eastern Canada to southwestern British Columbia (B.C.). We posit that the Fox Sparrow, Passerella iliaca, is a reservoir-competent host for Bbsl. The Bay-breasted Warbler, Setophaga castanea, and the Tennessee Warbler, Vermivora peregrina, are new host records for the blacklegged tick, Ixodes scapularis. We provide the first report of a Bbsl-positive Amblyomma longirostre larva parasitizing a bird; this bird parasitism suggests that a Willow Flycatcher is a competent reservoir of Bbsl. Our findings show that Bbsl is present in all provinces, and that multiple tick species are implicated in the enzootic maintenance cycle of this pathogen. Ultimately, Bbsl poses a serious public health contagion Canada-wide. View Full-Text
Keywords: Borrelia burgdorferi sensu lato; Lyme disease; ticks; birds; mammals; vertebrate hosts; ectoparasite; tick-borne pathogens Borrelia burgdorferi sensu lato; Lyme disease; ticks; birds; mammals; vertebrate hosts; ectoparasite; tick-borne pathogens
►▼ Show Figures 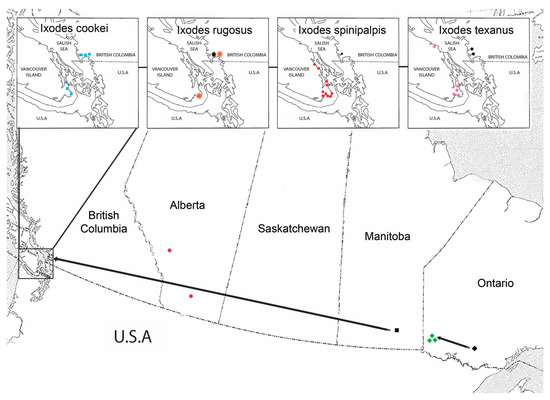