Total Domination on Some Graph Operators

Spatial Externalities of Income Inequality on Security in Latin America

The aim of this research is to analyse the effect of income inequality on the homicide rate. The study is carried out in 18 Latin American countries for the period 2005–2018. The methodology used is the Generalized Least Squares (GLS) model and the data were obtained from World Development Indicators, the World Health Organization and the Inter-American Development Bank. Thus, the dependent variable is the homicide rate and the independent variable is income inequality. In addition, some control variables are included, such as: poverty, urban population rate, unemployment, schooling rate, spending on security and GDP per capita, which improve the consistency of the model. The results obtained through GLS model determine that inequality has a negative and significant effect on the homicide rate for high-income countries (HIC) and lower-middle-income countries (LMIC), whereas it is positive and significant for upper-middle-income countries (UMIC). On the other hand, the control variables show different results by group of countries. In the case of unemployment, it is not significant in any group of countries. Negative spatial dependence was found regarding spatial models such as: the spatial lag (SAR) and spatial error (SEM) method. In the spatial Durbin model (SDM), positive spatial dependence between the variables was corroborated. However, spatial auto-regressive moving average (SARMA) identified no spatial dependence. Under these results it is proposed: to improve productivity, education and improve the efficiency of security-oriented resources. View Full-Text
Keywords: inequality; homicides; Latin America; spatial models inequality; homicides; Latin America; spatial models
►▼ Show Figures 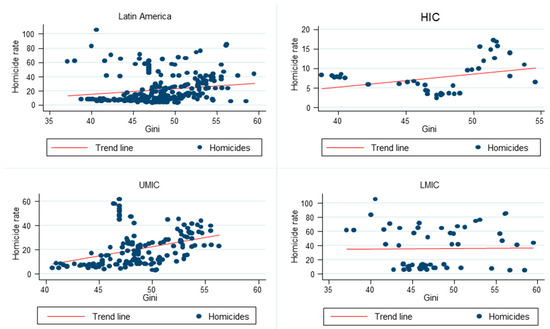 María de la Cruz del Río-Rama
Business Management and Marketing Department, Faculty of Business Sciences and Tourism, University of Vigo, 32004 Ourense, Spain
Zoom | Orient | As Lines | As Sticks | As Cartoon | As Surface | Previous Scene | Next Scene
We use cookies on our website to ensure you get the best experience. Read more about our cookies here.
Accept
We have just recently launched a new version of our website. Help us to further improve by taking part in this short 5 minute survey here. here.
Never show this again