On Tail Dependence and Multifractality
Previous Article in Journal

This section presents a mathematical problem for pricing an American put option under the generalized Black–Scholes model. The assumption of the models of Black–Scholes [1] and Alghalith [10] are adopted. Let denote the value of an underlying asset price as a function of the current time t. is assumed to follow the process: where and are the constant interest rate and the volatility, respectively, and is a standard Brownian motion. Well-known in the literature is that the wealth process satisfies this equation (see [11]): where is the risky portfolio process and is the consumption rate (defined as the amount of money consumed at time t). Consumption is possible by the option writer if the buyer/holder did not exercise at the optimal exercise time because, in this case, the writer gains extra money (in excess of the hedging need) that can be consumed and , where is the price of the American put option.
Therefore, given the assumptions of the Black–Scholes [1] model and following Alghalith [10], the modified Black–Scholes partial differential equation(PDE) is where and refer to partial derivatives. Following the literature (see [11]), c in the previous PDE is replaced by its average ; this expression is substituted into (3) to obtain where (see [10]).
The payoffs for an American put option at the underlying asset price with exercise price K and time T to expiration are The valuation of an American put option is denoted as , and is the time to expiration for . As is well-known [12], a function exists that is commonly referred to as the optimal exercise boundary, such that the option is exercised for and In this case, the region in which it is optimal to exercise, generally called the “exercise region” is defined as . Instead, for , the American option price satisfies the following generalized Black–Scholes equation: where . In this case, the region in which it is optimal to hold, generally called the “continuation region” is defined as . Further, we assume that the optimal exercise boundary decreases continuously with .
Mckean’s analysis [3] implies that the value of an American put option and the exercise boundary jointly solve the free boundary problem consisting of (7) subject to the following boundary conditions: and the initial condition For more detailed information on Equations (7)–(11), please see Reference [13].
To find the optimal exercise boundary, we review a transformed function developed by Kim et al. [14] as follows: This transformed function ensures that the solution surface in the exercise (continuation) region is a horizontal (inclined) plane. The transformed function forms a sufficiently large angle for which the horizontal line corresponds to the exercise region, rendering the borderline easily distinguishable (see Figure 1). The function also has a Lipschitz character with non-singularity and non-degeneracy near the optimal exercise boundary (i.e., the optimal exercise boundary is easily identified).
The free boundary partial differential problem (7)–(11) does not have an exact closed-form solution; thus, a numerical approximation is required. In the following sections, the transformed function is applied, and then the optimal exercise boundary is obtained.

The author is supported by the National Research Foundation of Korea (NRF) under Grant No. 2019R1G1A1099148. 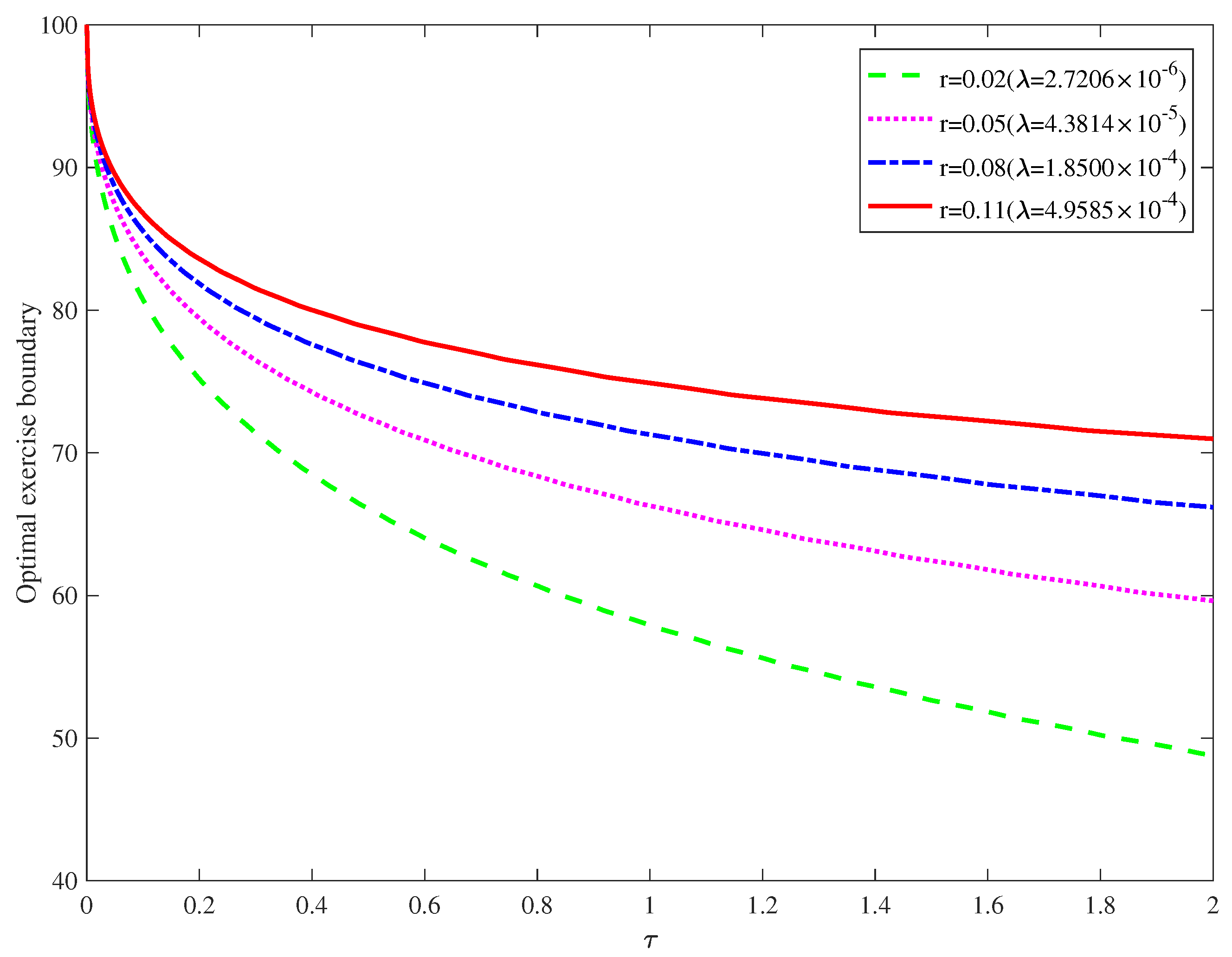 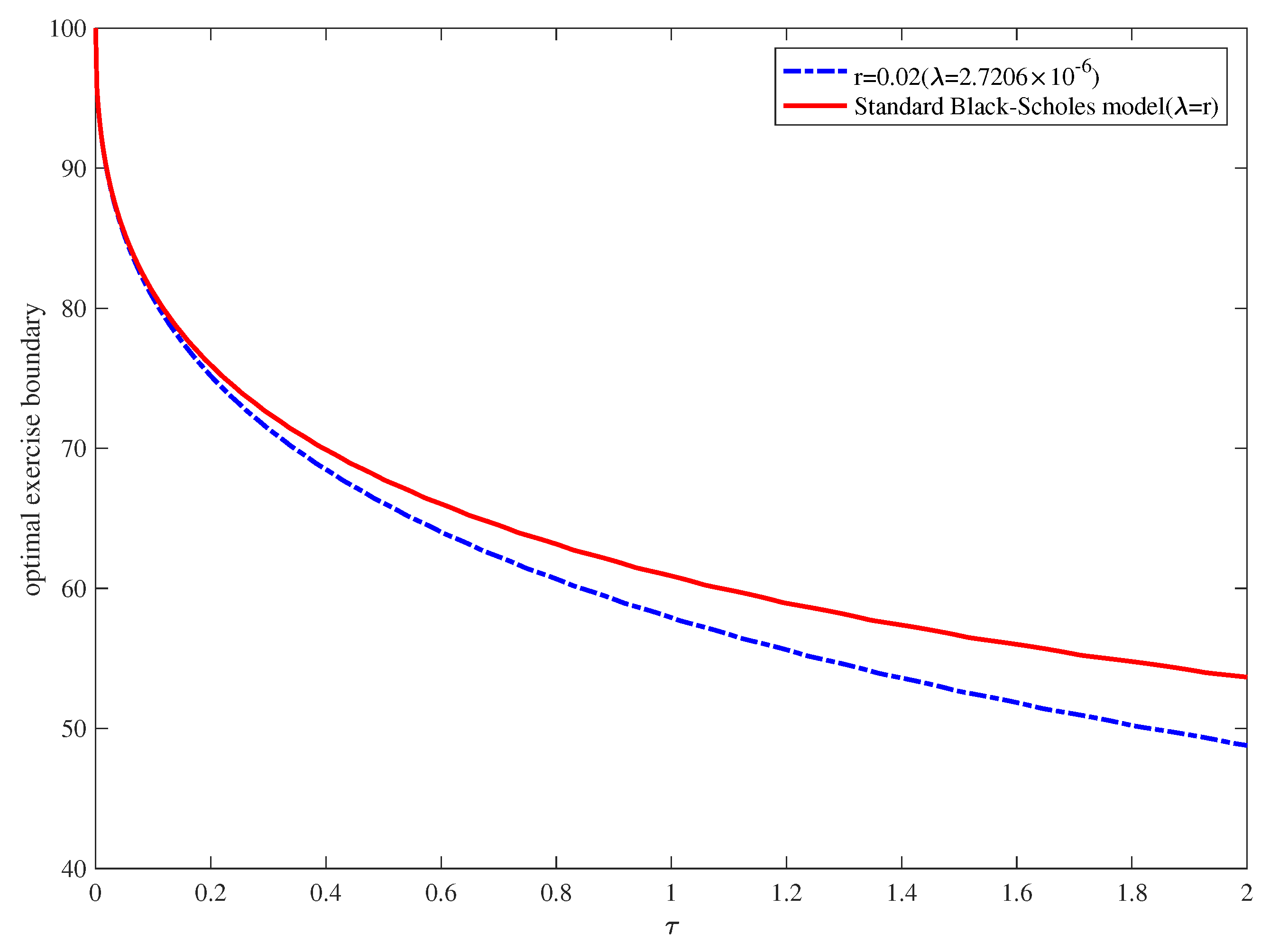