Probabilistic Study of the Effect of Anti-Epileptic Drugs Under Uncertainty: Cost-Effectiveness Analysis
Next Article in Special Issue

We propose a new forecasting procedure that includes randomized hierarchical dynamic regression models with random parameters, measurement noises and random input. We developed the technology of entropy-randomized machine learning, which includes the estimation of characteristics of a dynamic regression model and its testing by generating ensembles of predicted trajectories through the sampling of the entropy-optimal probability density functions of the model parameters and measurement noises. The density functions are determined at the learning stage by solving the constrained maximization problem of an information entropy functional subject to the empirical balances with real data. The proposed procedure is applied to the randomized forecasting of the daily electrical load in a regional power system. We construct a two-layer dynamic model of the daily electrical load. One of the layers describes the dependence of electrical load on ambient temperature while the other simulates the stochastic quasi-fluctuating temperature dynamics.
Keywords: forecasting; randomization; dynamic regression; information entropy; empirical balance; randomized machine learning forecasting; randomization; dynamic regression; information entropy; empirical balance; randomized machine learning

Randomization as a means of imparting artificial and rationally organized random properties to naturally nonrandom events, indicators, or methods is a fairly common technique that yields a positive effect. There exist many examples in various fields of science, management, economics: randomized numerical optimization methods [35,36]; the mixed (random) strategies of trading on a stock exchange [37]; the randomized forecasting of population dynamics [38]; vibration control of industrial processes [39]. As the result of randomization, nonrandom objects gain artificial stochastic properties with optimal probabilistic characteristics in a chosen sense. The question on appropriate quantitative characteristics of optimality has always been controversial and ambiguous. It requires arguments that would somehow reflect the important specifics of a randomized object. In particular, a fundamental feature of forecasting procedures is uncertainty in the data, predictive models, methods for generating forecasts, etc.
In what follows, information entropy [40] will be used as a characteristic of uncertainty. In the works [41,42,43], using the first law of thermodynamics it was demonstrated that entropy is a natural functional describing the processes of universal evolution. Moreover, in accordance with the second law of thermodynamics, entropy maximization determines the best state of an evolutionary process under the worst-case external disturbance (maximum uncertainty). Also, note another quality of information entropy associated with measurement errors and other types of errors, which are important attributes of data: with the factor of such errors being considered in terms of informational entropy, the probabilistic characteristics of noises exerting the worst-case impact on forecasting procedures can be estimated in explicit form.
The technology of entropy-randomized forecasting consists of the following stages. At the beginning (the first stage), a predictive randomized model (PRM) of a studied object is formed and its parameters are designed. A PRM transforms real data into a model output. In the general case, these transformations are assumed to be dynamic, i.e., the model output observed at a time instant n depends on the states observed on some past interval. The PRM parameters are assumed to be of the interval type and random, and their probabilistic properties are characterized by the corresponding PDFs.
The second stage of the technology under consideration—randomized machine learning (more specifically, its entropy version)—is intended to estimate the PDFs. At this stage, the estimates of the PDFs are calculated using learning data sets and also a learning algorithm in the form of a functional entropy-linear programming problem.
At the third stage, the optimized PRM (with the entropy-optimal PDFs) is tested using a test data set and accepted quantitative characteristics of the quality of learning. The optimized PRM actually generates an ensemble of random trajectories, vectors, or events with the entropy-optimal values of their parameters.
The learned and tested PRMs serve for forecasting. In this case, the ensembles of random forecasted trajectories generated by the entropy-optimal PRMs are used to calculate their numerical characteristics such as mean trajectories, variance curves, median trajectories, the PDF evolution of forecasted trajectories, etc.

The entropy version [10] of RML algorithms is used for estimating the PDFs of the model parameters and measurements noises of RDRM-O and RDRM-F. For RDRM-O, the corresponding algorithm has the form subject to the following constraints:

Please note that the empirical balances represent a system of blocks composed of m equations. With each block an m-dimensional vector of Lagrange multipliers is associated. This optimization problem belongs to the class of entropy-linear programming problems of the Lyapunov type [44]. It has an analytic solution parametrized by the Lagrange multipliers:
In the above formulas,
The matrix of Lagrange multipliers is determined by solving the balance equations
From (25)–(27) it follows that the PDFs and of the model parameters of RDRM-O and the PDFs of the measurement noises are found using the retrospective learning data sets , the current state data sets and the data sets generated by RDRM-F.
For obtaining the latter collections, the RML algorithm is applied to estimate the PDFs of the model parameters and measurement noises of RDRM-F. In accordance with [10], subject to the following constraints:

The article proposes a new forecasting approach based on the idea of generation not the only forecast and not a set of forecasts with the scenario’s model parameters, and not forecasts with assigned probabilities, but the ensemble of random forecasts with entropy-optimal model parameters and measurement noises.
For the randomized forecasting we propose a structure of predictive dynamical model which uses as real data as optimized noises. The latter are the source of ensemble of predictive trajectories, which allow computing deterministic trajectories of its different numerical characteristics and probabilistic estimates. 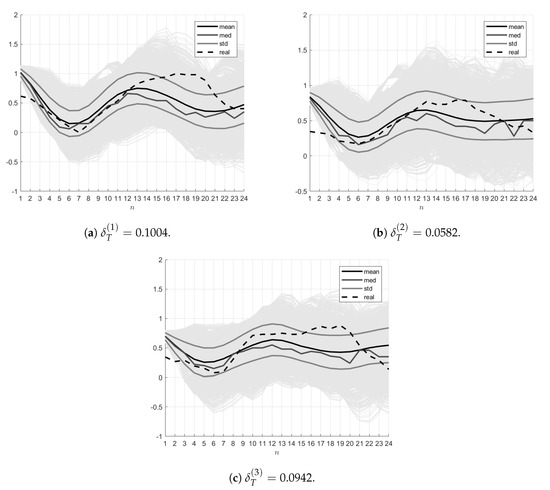