Discounted Optimal Stopping of a Brownian Bridge, with Application to American Options under Pinning
Previous Article in Journal

:
In the present paper, we review the use of two-state, Generalized Auto Regressive Conditionally Heteroskedastic Markovian stochastic processes (MS-GARCH). These show the quantitative model of an active stock trading algorithm in the three main Latin-American stock markets (Brazil, Chile, and Mexico). By backtesting the performance of a U.S. dollar based investor, we found that the use of the Gaussian MS-GARCH leads, in the Brazilian market, to a better performance against a buy and hold strategy (BH). In addition, we found that the use of t-Student MS-ARCH models is preferable in the Chilean market. Lastly, in the Mexican case, we found that is better to use Gaussian time-fixed variance MS models. Their use leads to the best overall performance than the BH portfolio. Our results are of use for practitioners by the fact that MS-GARCH models could be part of quantitative and computer algorithms for active trading in these three stock markets.
Keywords:
Markov-Switching; Markov-Switching GARCH; Markovian chain; algorithmic trading; active stock trading; active investment; Latin-American stock markets; computational finance

2. Literature Review of the Use of MS-GARCH Models

3.1. The MS-GARCH Model and Its Use in the Active Trading Algorithm

The MS-GARCH model that we will test herein has the functional form of (10). As Haas, Mitnik, and Paolella [13] suggest, the MS-GARCH models must be inferred once the residuals have been calculated from a conditional mean such as the one of an arithmetic mean or an ARMA model in . Since this paper is the first test of the application of the MS-GARCH model for investment purposes in the main LATAM stock markets, we used the arithmetic mean of the returns (we will leave the application of ARMA models for further research). With the residuals determined as , we used these to calculate the MS-GARCH model. We did this by assuming that the stochastic process can be modeled with a two-regime Markovian chain that can be filtered, at , from the time series of . This takes place with either a Gaussian or a standardized t-Student filtered probability function as follows, respectively:
In these expressions, are the degrees of freedom that determine the shape of the t-student pdf. These will lead us to the maximization of the next log-likelihood function, in which is the stable probability (mixing law) of each regime (please refer to Hamilton [14,16] for further reference).
In order to estimate the parameter vector of (10), we will use a maximum likelihood method with the Viterbi [56] algorithm as used in the MSGARCH R package [57]. R and this package are the core computational software of our back tests and trading algorithm. From the inferred parameters with Equations (12) to (14), we were interested in the filtered probability at and the transition probability matrix . With these, we can estimate the probability of being in each regime at as follows.
Given the two forecasted probabilities of being in the regime at , an investor can determine if she expects to be in a high-volatility regime at with the next indicator function.
We propose this regime filtering, given in Equations (12) or (13) by following the standard suggestions in the related econometrics literature [14,15,16,18,19,20,25]. Once the filtered probabilities (12) or (13) were estimated with the Viterbi algorithm, we inferred their smoothed values, given Kim’s method [58].
A natural question of the MS-GARCH model use is: why is it necessary to compare the performance of an investor if using either a MS, MS-ARCH, or MS-GARCH variance in Equations (12) or (13)? Our position is that, given the time-fixed ARCH or GARCH scale parameter used in Equations (12) or (13), the estimated smoothed probability of each regime will differ. This result will also lead to a different precision level in the forecast of . With these different values of , it is expected that there will be different trading decisions in Equation (16) at . Given this, we backtested six scenarios in which we changed the variance estimation method (time-fixed, ARCH, or GARCH) and the Log-Likelihood Function (LLF) function with Equations (12) or (13).
Given the regime expectation in Equation (16), the trading algorithm that we tested herein was translated to the next computational decision system at :
Given the use of MS and MS-GARCH models in this computational trading algorithm, we will proceed to describe the simulation process used.

Markov-Switching (MS) models, as proposed by Hamilton [14,15,16], are very useful to determine if a time series’ stochastic process has several regimes. This allows us to infer an number of location (mean) and scale (standard deviation) parameters. Among the most useful applications of these models in the financial industry, we mention the measurement of the risk level in a given investment with two or more possible regimes or states of nature. For the purposes of this paper, the regime corresponds to a normal or low volatility state of nature at and for a distress or high volatility one. This leads to a very useful risk measure, along with the probability of being in a given regime at or ().
Despite this practical use of the MS models in risk management, little has been written about the use of MS models in stock trading decisions. By knowing the probability of being in a given regime at , an investor can determine whether to invest in a risky (risk-free) asset if the probability of being in a normal (distress) regime is high. This rationale departs from the one proposed by Brooks and Persand [18] and the extensions of Engle, Wahl, and Zagst [21] and De la Torre, Galeana, and Álvarez-García [22]. These previous works test the benefit of investing in a given developed financial market with MS models.
Given the scant literature review of MS models for stock trading, there is no work that test their use in the three most traded Latin American markets from a U.S. dollar-based investor perspective. Additionally, none of the related previous works test the benefit of using a MS model with ARCH (MS-ARCH) or GARCH (MS-GARCH) variances in trading decisions.
Departing from these two issues, the paper tests the use of MS, MS-ARCH, or MS-GARCH models in the Brazilian, Chilean, and Mexican stock markets. With 996 weekly simulations from January 2000 to February 2019 we fitted MS, MS-ARCH, and MS-GARCH models (with Gaussian and t-Student probability density functions) and we ran the next trading rule.
Our results suggest that the Gaussian MS-GARCH and the t-Student MS-GARCH are the best models for investment decisions in the Brazilian and Chilean stock markets, respectively. For the Mexican case, it is preferable to use a Gaussian MS (with constant variance) model.
Despite the beneficial use of these models for investing in these countries, the conclusions in our results change the risk measurement purposes. This means that, for risk management, it is better to use a Gaussian MS (constant variance) model in the Brazilian and Chilean markets. For the Mexican case, it is preferable to use the Gaussian MS-GARCH model.
Our results could be of theoretical use in order to understand the practical use of MS and MS-GARCH models in forecasting during distressful or highly volatile periods. In addition, this can help us to understand and to prove their application in trading decisions. In practical terms, our results contribute to the literature of using MS and MS-GARCH models in trading. This along with the benefits of their use in the three main Latin-American stock markets from a U.S. dollar-based investor perspective.
As extensions to this paper or research guidelines for further research, we suggest testing the use of other probability functions such as the symmetric and asymmetric Gaussian t-Student or GED regime likelihood functions. This test could be made with homogeneous (the same likelihood function in each regime) or homogeneous probabilities in each regime. As another potential review and extension to our results, we propose the use of MS models with asymmetric GARCH processes (also homogeneous and heterogeneous in each regime) along with fractional integration (long memory modelling).
In addition, the use of MS models with more than two regimes in the stochastic process, along with the test in other stock markets or other type of securities, could be of potential interest. We also believe in theoretical interest for Bayesian Statistics to determine what is best to use: either a rolling time window or a recursive (increasing time series) one. This issue is also of practical interest because the potential use of time rolling windows could enhance the informatic efficiency of the MS-GARCH model estimation method. Despite this, this informatic efficiency could come with a cost in terms of accuracy cost in the estimated parameters. Furthermore, the extension of the current MS trading algorithm with a portfolio of these three indexes (or more) is part of the research agenda suggested. In order to manage a portfolio with several stocks or indexes in a regime-switching context, it is needed to make research efforts in the application of MS correlation models [65,66] in trading algorithms such as ours. Lastly, none of the estimations that we made herein used GARCH models that incorporate the influence of external factors (economic or financials). Models like these ones are studied in Billah, Hyndman, and Koehler [67], Conrad and Loch [68], Amendola et al. [69], and Amendola, Candila, and Gallo [70]. We did not consider this type of MS-GARCH models due to the determination of the proper factors that influence the performance of the three stock indexes. Lastly, given these factors, the determination of the proper MS-GARCH model with these could be another extension for our research efforts. 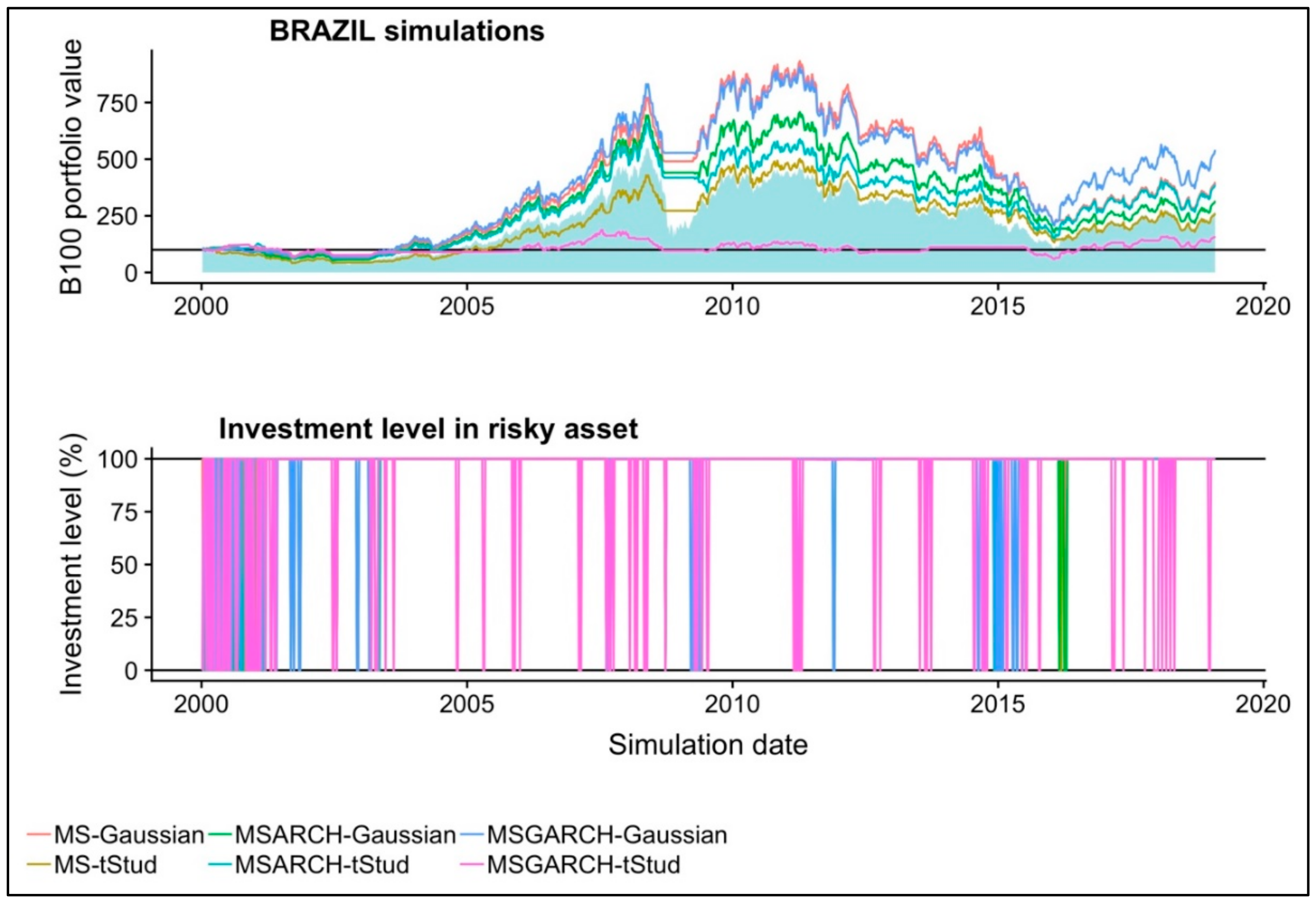