E-Learning in the Teaching of Mathematics: An Educational Experience in Adult High School
Previous Article in Journal

Solar energy is an alternative source of energy that can be used to replace fossil fuels. Various types of solar cells have been developed to harvest this seemingly endless supply of energy, leading to the construction of solar cell devices, such as dye-sensitized solar cells. An important factor that affects energy conversion efficiency of dye-sensitized solar cells is the distribution of dye molecules within the porous semiconductor (TiO). In this paper, we formulate a continuum model for the interaction between the dye molecule Tris(2,2-bipyridyl)ruthenium(II) (Ru(bpy)) and titanium dioxide (TiO) semiconductor. We obtain the equilibrium position at the minimum energy position between the dye molecules and between the dye and TiO nanoporous structure. Our main outcome is an analytical expression for the energy of the two molecules as a function of their sizes. We also show that the interaction energy obtained using the continuum model is in close agreement with molecular dynamics simulations.
Keywords: tris(2,2′-bipyridyl)ruthenium(II); titanium dioxide; equilibrium position; interaction energy tris(2,2′-bipyridyl)ruthenium(II); titanium dioxide; equilibrium position; interaction energy

The molecular structure of Ru(bpy) is CHNRu is shown in Figure 1. The ruthenium (Ru), nitrogen (N), carbon (C), and hydrogen (H) atoms are all radially distributed from the centre, and therefore, as shown in Figure 2a, we may model the molecule as spherical layers of N, C, and H atoms and with the Ru atom located at the centre of the molecule. We observe that C atoms are densely packed between N and H layers. Consequently we assume that the layer of C atoms is modelled as a shell of a certain thickness ℓ.
The radius for each shell is obtained from Avogadro (a molecular editor and visualizer software), where both the bond length and the bond angle are taken into account. As illustrated in Figure 2a, the radii of N and H layers are assumed to be Å and Å, respectively, whereas the thickness of the C layer is taken to be Å.
The mean atomic surface densities of N and H layers, and the mean atomic volume density of the C layer are given by where the Ru(bpy) molecule is composed of six N atoms, 24 H atoms, and 30 C atoms, and we subsequently refer to this model as Model I.
Although Model I preserves the spherically symmetric nature of the four atomic types in Ru(bpy), a number of parameters are needed to define this model. Accordingly, we consider a second simpler approach for which Ru(bpy) is modelled as a solid sphere of radius Å with mean atomic volume density: which we refer to as Model II and this model is shown in Figure 2b.

The TiO semiconductor is assumed to be formed from mixed crystals of titanium dioxides, and only atomic proportions of titanium and oxygen are considered. In this paper, we model the TiO molecule as a solid sphere of radius Å. We note that this value is chosen to facilitate the computation in our molecular dynamics simulations since it is large enough as compared to the size of the dye molecule. A value larger than this would require a longer computational time for little significant change from the results presented here. Using Å, the mean volume density of spherical TiO structure becomes where and are the numbers of titanium atoms and oxygen atoms, respectively [33,34,35].

In the DSSCs, the dye molecules and the semiconductor are placed in an electrolytic solution. Consequently, they become neutralized and thus we may ignore their electrostatic interactions, and therefore, we only consider the van der Waals interaction here. The Lennard-Jones potential is utilized to quantify the van der Waals interaction energy between two atoms, and it can be written as where and represent the attractive and the repulsive constants, respectively, is the well depth, is the van der Waals diameter, and denotes the distance between the atoms. For the interaction between two molecules using the continuum approach, the total potential energy can be obtained by integrating (1) over the surfaces or volumes of the two molecular structures, where and represent either the mean atomic surface densities (when molecules are modelled as surfaces), or the mean atomic volume densities (when molecules are modelled as volumetric structures). Moreover, and are either the surface areas or the volumes of the two molecules. By introducing the notation , the potential energy given by (2) becomes
The values of and are taken from [36], and the Lennard-Jones constants A and B are calculated which are given in Appendix A.
There are five integrals corresponding to five types of interactions which are needed to be evaluated.

3. Interaction Energies between Dye and Semiconductor

Upon adopting the analytical expressions given in the previous section, the interaction energy between two dye molecules, and between a dye molecule and a TiO structure can be determined. The details are presented in the following subsection.

In Model I, the Ru atom is assumed to be located at the centre and surrounded by the layers of N, C and H atoms. The interaction between two Ru(bpy) molecules can be obtained from summing over all possible interactions, namely where i and j represent the atomic species of Ru, N, C and H. The total interaction energies of the two dye molecules are detailed in Appendix B.

The Ru(bpy) molecule is assumed to be a solid sphere of radius Å, and the interaction energy between two dye molecules can be calculated by where and are given in Equations (7) and (8), respectively, and the Lennard-Jones constants A and B are given in Appendix A.

The potential energy between the dye molecule of Model I and a solid sphere of TiO is given by where i refers to either to Ru atom, N, C or H layers. Again, the total interaction energy is detailed in Appendix B.

The energy arising from the interaction between a solid sphere of the dye molecule and a solid sphere of TiO can be given by where the calculation for the attractive A and the repulsive B constants is given in Appendix A.

Based on the structural materials of dye-sensitized solar cells (DSSCs), this paper studies the interactions of two dye molecules and between the dye molecule and the TiO semiconductor. We use the continuum approach and the Lennard-Jones potential to evaluate the molecular interaction energy of the systems to determine analytical expressions for the interaction energy.
In addition, MD simulations are performed to investigate the energy behaviour of two dye molecules and the dye molecule interacting with the semiconductor TiO. The results obtained from the simulations demonstrate that the Ru(bpy) dye molecule is not a perfectly spherical. However, both a spherical shell and a densely packed sphere provide a good approximation to model the dye molecule as numerically indicated in Table 1. We also find the minimum distance where the two nanoparticles begin to attract each other and the equilibrium distance where the two molecules are most stable. The present work provides an insight and understanding of the Ru(bpy) dye molecule interacting with TiO structure and a basic tool for modelling these components, which is crucial for the further development of DSSCs. Future work in this area includes the development of a more robust benchmark study (e.g., a full ab initio molecular dynamics study) for the quantitative and qualitative validations of the analytical models.

S.P. is grateful for the financial support of the Development and Promotion of Science and Technology Talents Project, Thailand. The authors acknowledge the Australian Research Council for the funding of Discovery Project DP170102705 and the Thailand Research Fund RSA6180076.

In this appendix we present the detail necessary for the determination of the various Lennard-Jones constants. Values of and for different atomic species are taken from [36] and are re-introduced in Table A1. By using the mixing rules [39] which are given by and where the subscripts 1 and 2 denote the atomic types, A and B can be calculated and given in Table A2.

Appendix B. Interaction Energy between Dye and Semiconductor Obtained by Model I

Here, we detail the energy contribution for the the dye molecule of Model I. In Model I, the dye molecule Ru(bpy) is assumed to be composed of four spherical layers, so that the total interaction energy between the two dye molecules comprises:

with the Lennard-Jones constants A and B as given in Table A2.
In terms of the interaction energy between the Ru(bpy) and the TiO molecule, the total interaction energies can be obtained from:

The Lennard-Jones constants A and B can be evaluated by where there is one titanium atom and two oxygen atoms in a molecule of TiO.

In this appendix, we present the three-dimensional figures for the dye-dye molecular interactions and the dye-TiO molecular interactions at their equilibrium positions. The corresponding configuration of the two dye molecules giving the high energy ( kcal/mol) at and is illustrated in Figure A1a. Furthermore, at and , the interaction energy is at its lowest value of kcal/mol. Their corresponding configuration is shown in Figure A1b. 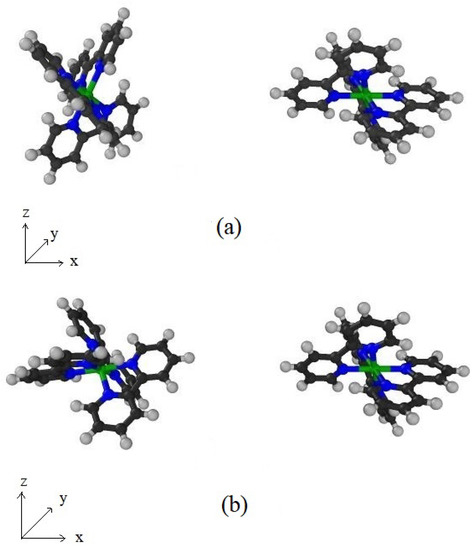 The schematic model of the interaction between a dye molecule and a sphere of TiO in the MD simulation is illustrated in Figure A2. 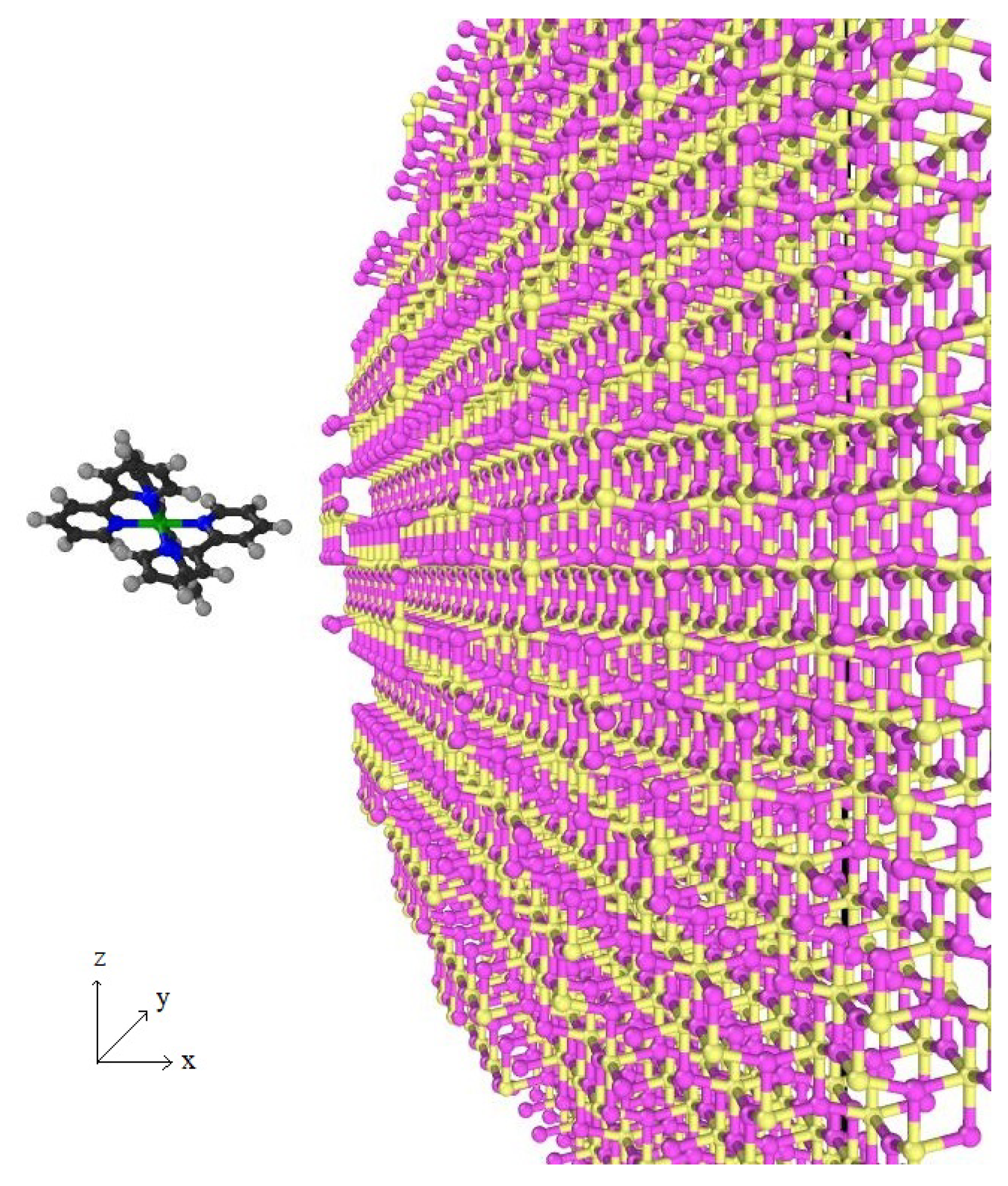 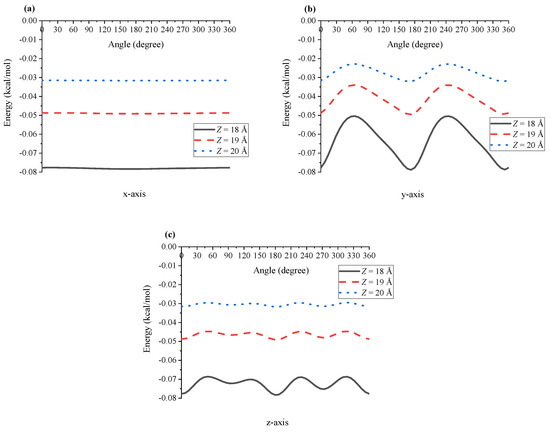 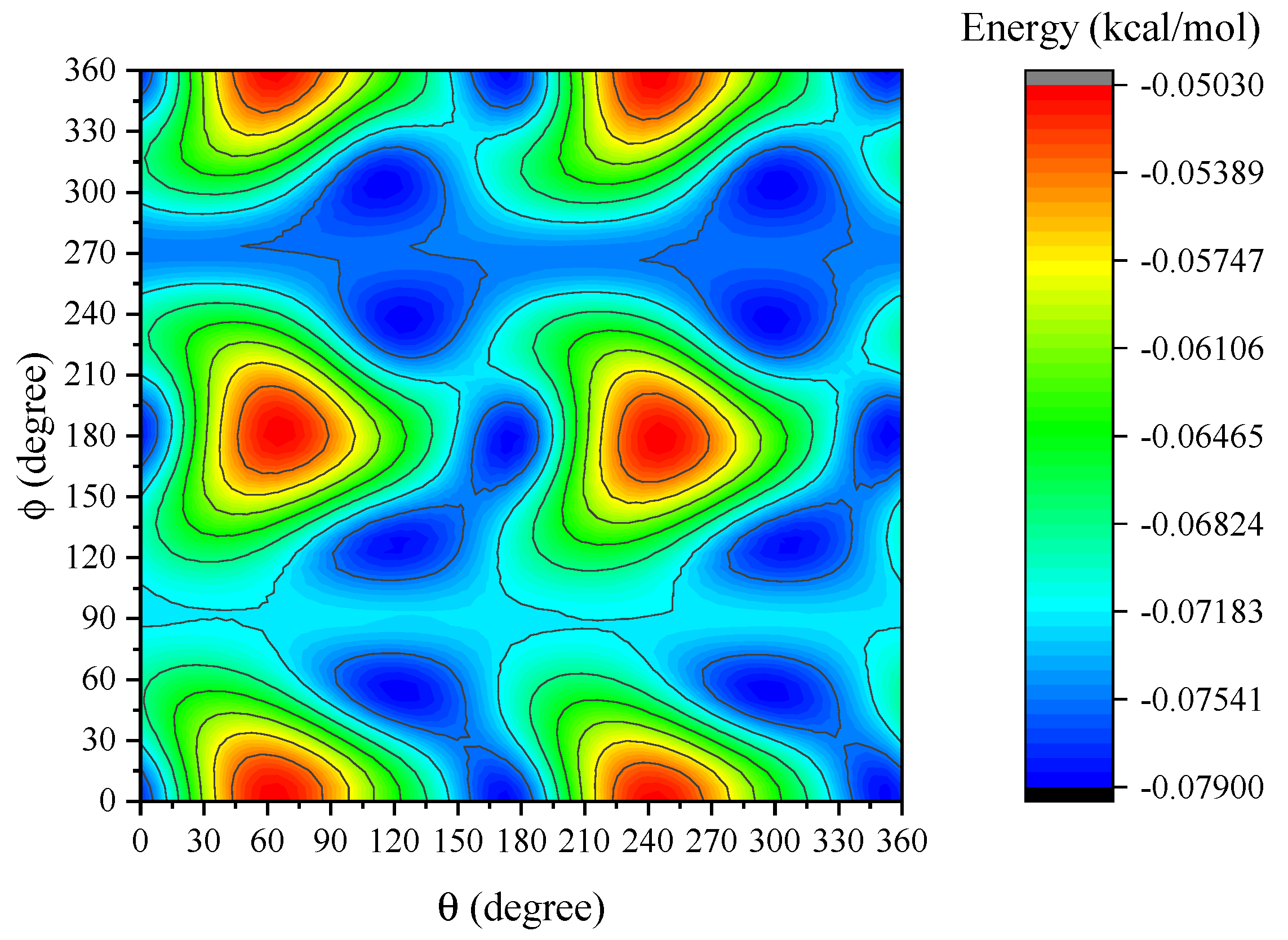 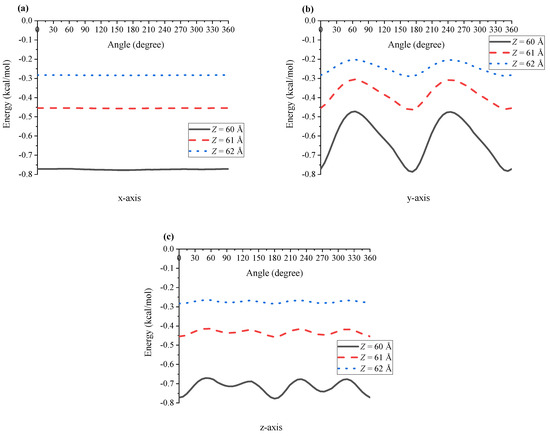