Variations on the Brouwer Fixed Point Theorem: A Survey

The Expectation-Maximization algorithm is adapted to the extended Kalman filter to multiple GNSS Precise Point Positioning (PPP), named EM-PPP. EM-PPP considers better the compatibility of multiple GNSS data processing and characteristics of receiver motion, targeting to calibrate the process noise matrix Qt and observation matrix Rt, having influence on PPP convergence time and precision, with other parameters. It is possibly a feasible way to estimate a large number of parameters to a certain extent for its simplicity and easy implementation. We also compare EM-algorithm with other methods like least-squares (co)variance component estimation (LS-VCE), maximum likelihood estimation (MLE), showing that EM-algorithm from restricted maximum likelihood (REML) will be identical to LS-VCE if certain weight matrix is chosen for LS-VCE. To assess the performance of the approach, daily observations from a network of 14 globally distributed International GNSS Service (IGS) multi-GNSS stations were processed using ionosphere-free combinations. The stations were assumed to be in kinematic motion with initial random walk noise of 1 mm every 30 s. The initial standard deviations for ionosphere-free code and carrier phase measurements are set to 3 m and 0.03 m, respectively, independent of the satellite elevation angle. It is shown that the calibrated Rt agrees well with observation residuals, reflecting effects of the accuracy of different satellite precise product and receiver-satellite geometry variations, and effectively resisting outliers. The calibrated Qt converges to its true value after about 50 iterations in our case. A kinematic test was also performed to derive 1 Hz GPS displacements, showing the RMSs and STDs w.r.t. real-time kinematic (RTK) are improved and the proper Qt is found out at the same time. According to our analysis despite the criticism that EM-PPP is very time-consuming because a large number of parameters are calculated and the first-order convergence of EM-algorithm, it is a numerically stable and simple approach to consider the temporal nature of state-space model of PPP, in particular when Qt and Rt are not known well, its performance without fixing ambiguities can even parallel to traditional PPP-RTK. View Full-Text
Keywords: EM-algorithm; multi-GNSS; PPP; process noise; observation covariance matrix; extended Kalman filter; machine learning EM-algorithm; multi-GNSS; PPP; process noise; observation covariance matrix; extended Kalman filter; machine learning
►▼ Show Figures 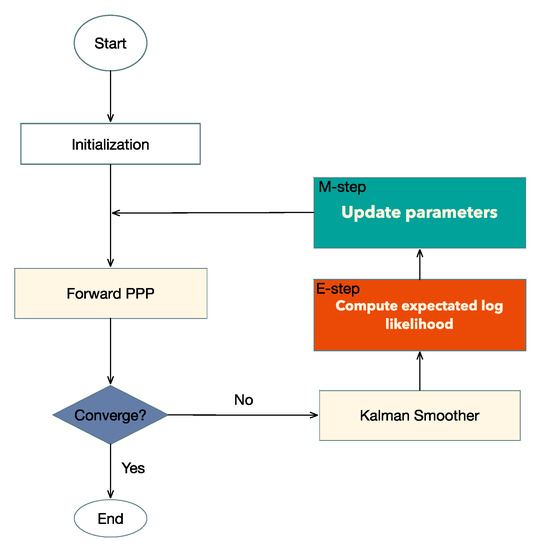