The “Lévy or Diffusion” Controversy: How Important Is the Movement Pattern in the Context of Trapping?

Linearization of the Kingman Coalescent

Kingman’s coalescent process is a mathematical model of genealogy in which only pairwise common ancestry may occur. Inter-arrival times between successive coalescence events have a negative exponential distribution whose rate equals the combinatorial term where n denotes the number of lineages present in the genealogy. These two standard constraints of Kingman’s coalescent, obtained in the limit of a large population size, approximate the exact ancestral process of Wright-Fisher or Moran models under appropriate parameterization. Calculation of coalescence event probabilities with higher accuracy quantifies the dependence of sample and population sizes that adhere to Kingman’s coalescent process. The convention that probabilities of leading order are negligible provided is examined at key stages of the mathematical derivation. Empirically, expected genealogical parity of the single-pair restricted Wright-Fisher haploid model exceeds 99% where ; similarly, per expected interval where . The fractional cubic root criterion is practicable, since although it corresponds to perfect parity and to an extent confounds identifiability it also accords with manageable conditional probabilities of multi-coalescence. View Full-Text
Keywords: Markov chain; multiple coalescence; transition probability; Wright-Fisher model Markov chain; multiple coalescence; transition probability; Wright-Fisher model
►▼ Show Figures 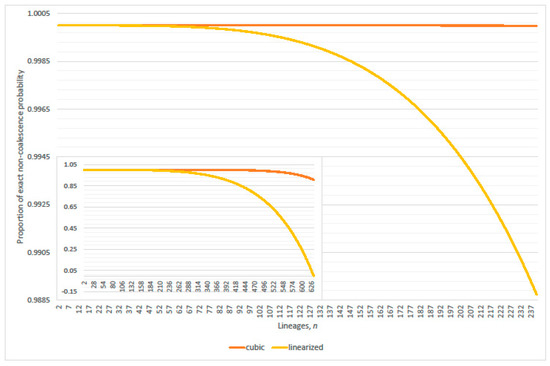