This article proposes a morphogenesis interpretation of the zeta function by computational approach by relying on numerical approximation formulae between the terms and the partial sums of the series, divergent in the critical strip. The goal is to exhibit structuring properties of the partial sums of the raw series by highlighting their morphogenesis, thanks to the elementary functions constituting the terms of the real and imaginary parts of the series, namely the logarithmic, cosine, sine, and power functions. Two essential indices of these sums appear: the index of no return of the vagrancy and the index of smothering of the function before the resumption of amplification of its divergence when the index tends towards infinity. The method consists of calculating, displaying graphically in 2D and 3D, and correlating, according to the index, the angles, the terms and the partial sums, in three nested domains: the critical strip, the critical line, and the set of non-trivial zeros on this line. Characteristics and approximation formulae are thus identified for the three domains. These formulae make it possible to grasp the morphogenetic foundations of the Riemann hypothesis (RH) and sketch the architecture of a more formal proof. View Full-Text
Keywords: Riemann hypothesis; morphogenesis; Fresnel integral; proof by computation Riemann hypothesis; morphogenesis; Fresnel integral; proof by computation
►▼ Show Figures 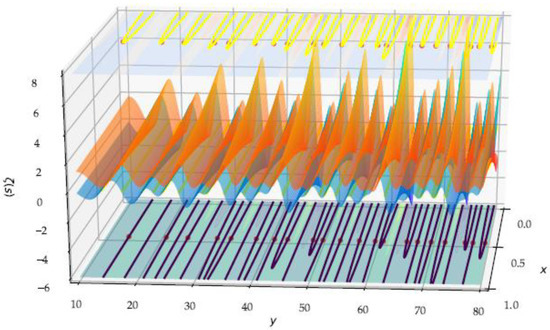