Let denote the space of all n-square matrices over the complex field and let be the symmetric group of degree n. For , the permanent function is defined as:
The permanent function therefore resembles the determinant, which in turn is given by: where denotes the sign function.
Although not as prominent as the determinant, the permanent function is still a well-known matrix function, with many applications in combinatorics and graph theory. However, while the determinant can be easily computed, no efficient algorithm for computing the permanent is known. The difficulty for a direct computation of the permanent leads to the idea of trying to compute it by using determinants. This problem dates back to 1913 in a work by Pólya [1], and it has been under intensive investigation since then. While it is clear that the permanent of a matrix: equals the determinant of the related matrix:
Szegö [2] proved that for , there is no way to generalize this procedure. That is, there is no uniform way of changing the signs in the entries of a matrix in order to obtain a matrix B satisfying .
In [3], Gibson proved that if A is an n-square -matrix, and if the permanent of A can be converted to a determinant by affixing ± signs to the elements of the matrix, then A has at most positive entries.
Later, Little [4] proved that an n-square -matrix can be conveniently represented by means of a bipartite graph and reinterpreted the problem of characterizing convertible matrices as the problem of characterizing bipartite graphs whose 1-factors can be counted by using Pfaffians in the manner suggested by Kasteleyn [5].
The computational complexity for determining if a -matrix is convertible was studied by Vazirani and Yannakakis [6] and Robertson, Seymour, and Thomas [7], leading the latter authors to design a polynomial-time algorithm capable of determining whether or not the permanent of the matrix is convertible into a determinant.
In this article, we consider mostly n-square -matrices with the maximum number of positive entries . For these cases, we present a procedure to determine whether or not a given matrix is convertible. Compared with previously available algorithms, this method does not rely on the associated bipartite graph, and is more efficient. This result is presented in Section 4, where we introduce a new concept: the imprint. Before that, in Section 3, we define Hessenberg-type matrices, generalizing the well-known notion of Hessenberg matrices, and present some preliminary results. Our main results are presented in Section 5. We extend Fonseca’s result [8] by presenting an explicit characterization of convertible Hessenberg-type matrices and corresponding subspaces. We conclude that convertible matrices can be reduced to a basic set.

Let us start with a brief summary of definitions and results that are subsequently used throughout the article.
In the present work, we exclusively consider square matrices, so we will drop the qualifier square in what follows. In general, the order n of the considered matrices is arbitrary, except when explicitly stated otherwise.
A matrix is said to be convertible if there exists a -matrix , such that: where ★ denotes the Hadamard product. As already mentioned in the Introduction, a convertible matrix of order n has at most nonzero entries [3].
For a -matrix S of order n, we define the associated coordinate subspace as:
It is clear that if S is convertible then every element of is also convertible, with respect to the same matrix C; i.e., there exists a -matrix such that:
We will also say that is convertible.
A well-known set of convertible matrices is the set of Hessenberg matrices. The matrix is said to be a lower (upper) Hessenberg matrix if for (). In [9], Gibson proved that the linear space of lower (or upper) Hessenberg matrices is a convertible subspace of . In [8], Fonseca extended Gibson’s result to a broader class of matrices. In the next section we introduce a definition that further extends the class of matrices considered in [8].
Definition 1.
Two matrices A and B are permutation equivalent if there exist permutation matrices P and Q such that . In such a case, we denoted it by .
It is clear that if A is convertible and , then B is also convertible.
Proposition 1.
If a matrix is convertible, then it is sufficient to change at most signs in order to convert the permanent into the determinant.
Proof.
Trivial by Lemma 3 and by the Theorem in [3]. ☐
Let . We denote by the submatrix of A obtained after removing rows and columns .
The following result is given in the proof of Lemma 1 of [3]:
Lemma 1.
Let be a convertible -matrix, with , where is a -matrix . If , then is also convertible, with:
A subspace version of this lemma follows immediately.
Proposition 2.
If is a convertible subspace and , then is also a convertible subspace.
Corollary 1.
If is a convertible subspace and are k nonzero elements of S, then is also a convertible subspace.
Proof.
Trivial by induction. ☐

4. The Imprint and a Criterion for Convertibility

The following new concept will allow us to determine if a given -matrix with nonzero entries is convertible or not in a very simple way, thus providing a useful criterion for convertibility of the associated subspaces.
Definition 3.
The imprint of an n-square -matrix is the array, sorted in increasing order, given by:whereand
We will denote the imprint of S by .
Example 2.
Consider the following matrices:Then,
Lemma 3.
If S is permutation equivalent to a full Hessenberg -matrix, then:
The following proposition gives a necessary and sufficient criterion for convertibility of matrices in with nonzero entries.
Proposition 6.
S is a convertible n-square -matrix with nonzero entries if and only if:
Proof.

Remark 1.
It follows from the last result that not all matrices in an -subspace are convertible. For example, the matrix:is not convertible because . 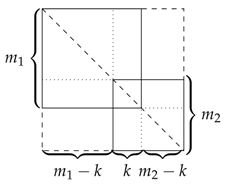 where the nonzero entries above the main diagonal are in the following regions: position , positions , …, in the first line and positions , …, in the last column, where the integer k can take any of the values . In particular, if , all the 1’s above the main diagonal are positioned in the first row and if all the 1’s are positioned in the last column.
We will refer to these matrices as basic, with the understanding that for the (only) basic matrix is the -Hessenberg matrix.
Proposition 8.
The basic matrices are convertible.
Proof.
The basic matrices are permutation equivalent to the Hessenberg matrix (or coincide with it, for ). ☐
Proposition 9.
If a full Hessenberg-type -matrix is convertible, then it is basic or an overlap of two or more basic matrices.
Proof.
We will prove it by induction.
For there are three convertible subspaces , where:
The first matrix S is a 1-overlap of two 2-square -hessenberg matrices, whereas the last two are basic.
Suppose now that the proposition is valid for n. Note first that validity for n actually guarantees validity for , and therefore for , with , for the following reason. Suppose there is a -square full convertible Hessenberg-type -matrix that is neither basic nor an overlap of basic matrices. The 1-overlap of this matrix (by means of the diagonal position ) with the basic matrix is then a full Hessenberg-type matrix of order n, and is convertible by Proposition 7, but fails to be basic or an overlap of basic matrices, which is a contradiction.
Let then be an -square full convertible Hessenberg-type -matrix. In what follows, we will repeatedly use Proposition 6, which establishes that for all integer , there is exactly one row and one column of S with exactly ℓ nonzero entries. Proposition 2 and Corollary 1 are also used.
Let , be the number of 1’s in the first row of S. It follows that rows 2, 3, …, until row k are fully determined. In particular, for these rows, for . Moreover, all entries in the first row at positions with must be 1’s, for the following reason. Matrices are convertible , and must therefore have less nonzero entries above the diagonal than S. However, for (and ), no 1’s would be removed from S, unless they are at positions . So, , …, in S are necessarily 1’s, with the remaining 1 in the first row appearing in an arbitrary position , (of course, the above constraints are void for ). Note that the column is also completely determined: it is already established that for , and it follows from Proposition 6 that the remaining entries must be 1’s. Now, if , we are done, since S is then seen to be basic (in particular, this includes the case ). Otherwise, we have and let be the square matrix formed by the first m rows and columns of S. This matrix is clearly convertible, by Corollary 1. On the other hand, since the combined number of 1’s above the diagonal in the first row and last column of is clearly , it follows that the maximum number of admissible nonzero entries is saturated, showing that is of the basic type. Furthermore, is certainly Hessenberg-type, convertible, and full, since the number of 1’s above the diagonal in is precisely , given that exactly k nonzero entries above the diagonal are removed from S. It is clear that S is an -overlap of with , thus completing our proof, since is, by hypothesis, basic or an overlap of basic matrices. ☐
We will conclude by counting the number of convertible full Hessenberg-type subspaces of order n, or the corresponding full convertible Hessenberg-type -matrices. Given an -subspace, there are different combinations of distributing the nonzero entries above the diagonal, where is the th triangular number. Of course, not all of them correspond to a convertible subspace. The number of convertible subspaces is established by the following proposition.
Proposition 10.
For , there are different full convertible Hessenberg-type -matrices of order n.
Proof.
We will prove it by induction. The hypothesis is clearly verified for . Suppose then that the proposition is valid for n and let us consider the case. It follows again from Proposition 6 that full convertible Hessenberg-type -matrices S fall in two classes: there are either two 1’s in the first row, with one of them necessarily at position , or two 1’s in the second row, necessarily at positions and . In the first case, assigning the remaining 1 to the position puts no restriction on the (full convertible n-square Hessenberg-type) matrix , and so there are as many possibilities for S as there are for (i.e., ). Assigning the remaining 1 to one of the positions , , restricts the form of , but one can easily convince oneself that the reunion of all these cases exhausts all possibilities for , so one again gets possibilities. In the second case, it follows from the arguments in the proof of Proposition 9 that there must be a 1 at position . In this case, there is no restriction on the matrix , and one gets again possibilities. So, there are full Hessenberg-type convertible matrices of order , thus completing the proof. ☐

This work was supported in part by FCT–Portuguese Foundation for Science and Technology through the Center of Mathematics and Applications of University of Beira Interior, within project UID/MAT/00212/2013.